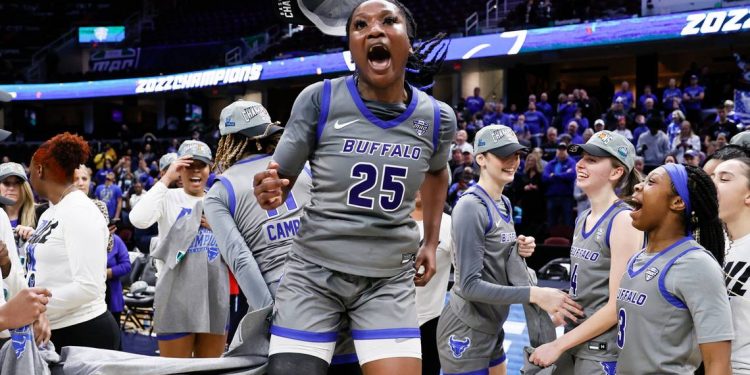 
The Kentucky women’s basketball program has landed its first player from the transfer portal under the guidance of head coach Kyra Elzy, and it comes at a position of significant need.

Adebola Adeyeye — a former four-year player at Buffalo — will be joining the UK program as a graduate transfer.

Adeyeye is a 6-foot-2 forward from Brampton, Ontario, Canada, who played for three seasons at The Rock School, a private secondary school in Gainesville, Florida, before going to Buffalo.

“It was welcome news this week to receive a commitment from Ade and add her to the Kentucky Wildcat family,” Elzy said in a statement. “She visited campus recently and I could tell it was a perfect fit right away. Her values match our program’s core values perfectly. She is a high-motor player with a great basketball IQ. Ade is fun to watch play because she brings elite energy to the floor at all times. She is an exceptional rebounder and really brings a tenacity to the glass.”

Thank God for this opportunity! Proud to say I am 10000% committed to the University of Kentucky ️
“The stone which builders rejected,Has become the chief corner stone” Psalm 118:22 pic.twitter.com/3EqFNKYwiT

At Buffalo, Adeyeye was a consistent starter for the Bulls.

A significant breakout came as a sophomore when she made 23 starts and 31 appearances while averaging 5.9 points, 6.6 rebounds and nearly 20 minutes per game.

Last season as a senior, Adeyeye made 17 starts and appeared in 28 games while averaging a career-best 6.5 points per game, along with 6.1 rebounds per game and 16 blocks.

Adeyeye again led the Buffalo team last season by shooting 56.2% from the field.

For her Buffalo career, Adeyeye played 116 games with per-game averages of 4.8 points and 5.1 rebounds.

Adeyeye twice played in the NCAA Tournament with Buffalo: As a freshman in 2019 and this past season as a senior.

Adeyeye logged eight minutes in March in a first-round loss to Tennessee.

Three of these players — Edwards, Massengill and Hunt — all announced their decisions to leave Kentucky on the same day.

In response, Elzy expressed confidence in herself, her coaching staff and what Kentucky can offer prospective players.

Elzy also recently received a contract extension through the 2026-27 season.

Kentucky is projected to have 11 scholarship players for the upcoming season.