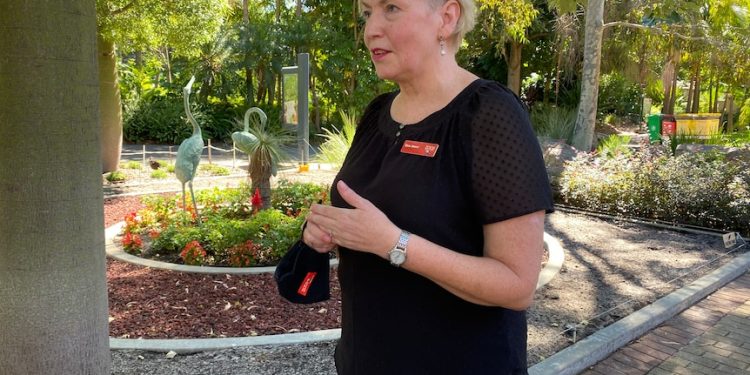 
Adelaide Zoo has defended a decision to award a lucrative ice cream contract to an interstate manufacturer, rather than a local company that promotes its products as palm-oil free.

South Australian company Golden North posted on social media this morning informing customers its contract to supply the zoo had not been renewed.

The company today said it felt like a case of “deja vu”, after a similar move to stop selling its products at the zoo in 2014 triggered backlash and community concern over palm oil products before the decision was reversed.

“What a ludicrous decision, especially since yours is palm-oil free,” one person wrote today, in response to Golden North’s Facebook post.

“Only palm-oil-free ice cream should be sold at the zoo,” another said.

The zoo’s chief executive, Elaine Bensted, downplayed the latest move, suggesting the dispute was trivial compared to the situation currently faced by zoos in Ukraine, amid Russia’s invasion.

“Whenever we change from one supplier to another, you expect some commentary,” Ms Bensted said.

“I’m talking to people in Ukraine, and we’ve got a situation in major zoos in Ukraine, [that] can’t get animal food supplies and, so, we’re doing fundraising to support [them]so I put it in that context that I sort of think, ‘Really? Ice cream’?”

Ms Bensted staunchly defended the zoo’s decision, saying that Streets, Golden North and Peters had all bid for the supply contract and that a rigorous tender process had been followed, in which each company had been “assessed … on a range of criteria”.

“We talked about their environmental credentials and that included about sustainable palm oil but also things like single-use plastic and packaging,” Ms Bensted said.

“We take, obviously, the use of palm oil very, very seriously. Palm oil is in so many different products, not just food products but also in packaging.”

Peters — which is based in Victoria but is now a subsidiary of overseas firm Froneri — has been contacted for comment.

Its website states that, while the company does not use palm oil in “any of our ice cream mix” and is committed to using “sustainable palm oil” elsewhere, some ingredients — such as syrups and biscuits that are sourced from external suppliers — “may include palm oil”.

Palm oil harvesting around the world is responsible for contributing to deforestation and the subsequent loss of habitats for endangered orangutans and other animals.

“Most conservation organisations and zoos have got a policy of supporting sustainable palm oil, certified by the Roundtable on Sustainable Palm Oil, because actually banning palm oil can do more harm than good,” Ms Bensted said.

“Palm oil does have some benefits in that it’s a very productive oil, so you actually need less land.

“If you’re using sustainably endorsed palm oil, you’re not looking at further land clearance, so Zoos South Australia is consistent with all major zoos in Australia and, in fact, worldwide — places like WWF all support the use of sustainable palm oil, and that’s definitely what Peters utilises within their ice cream products.”

The zoo’s orangutan program lead, Jodie Sheridan, said a push to boycott palm oil products globally had been launched about a decade ago, “but it didn’t work”.

“Boycotting didn’t work because we use [palm oil] far more than we realise,” she said.

“Clothes we wear, homes we live in, cars we drive will all have palm oil somewhere in those manufacturing lines.

“When a company labels themselves as palm-oil free, often they don’t know about their packaging, their transport systems, manufacturing, down to the lubrication that’s on machinery or product lines.”

He said the change in supplier had come into effect at the start of the month.

“We were starting to get phone calls from people saying, ‘I couldn’t find your product at the zoo’ and ‘Are you out of stock?'”

“There was quite a public backlash, so we posted again and said, ‘Look, it’s part of business’.

Mr Pomery said Golden North was likely to again put its hand up for the contract when the opportunity next arose.

“We had a very long relationship with the zoo. We’d been there for over 10 years,” he said.

“It’s a significant loss. They were a good customer.

“Going forward, we won’t have a relationship. They’ll deal with their new supplier, which is a European-based ice cream manufacturer and, when the tender comes up in five years, we’ll submit and see how we go.”

Simple Phrases to Learn in Auslan