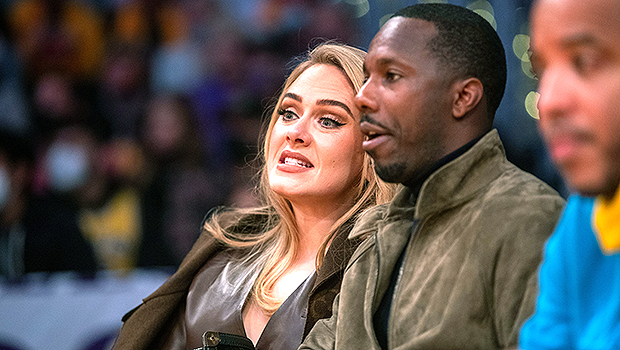 Adele and Rich Paul are taking the next step in their relationship journey! Adele shared a beautiful series of photos to her Instagram on Wednesday, showing the couple standing in front of a gorgeous white-colored home and Rich holding a key in his hand. “Time flies,” the “Easy on Me” singer captioned the post, which featured several photos that took a look back at the couple’s time together since they first began dating.

More photos in the series show numerous adorable moments of the couple together, like when Rich came to support the singer when she worked at McDonald’s and when they attended a softball game together, all smiles while in the stands.

Another photo showed Rich giving her a sweet smooch backstage at an event while the last pic featured Adele holding what appeared to be a fortune cookie message, which stated, “You have found good company — enjoy.”

Adele Then & Now: See Photos Of The ‘Easy On Me’ Singer’s Glamorous Transformation

In December, a source told us that Adele and Rich were the “perfect” couple, and that they “complement each other very well.”

“Anybody who knows Adele knows that it would take an equally strong man to even peak Adele‘s interest, but that’s very much who Rich is. He may not be known to some because he‘s been behind the scenes, but he‘s a very powerful man in what he does, and how he carries himself,” the source EXCLUSIVELY shared with HollywoodLife.

The insider went on, “Adele enjoys having a man by her side who is just as much a powerhouse as she is. It may seem an unlikely couple, but they actually complement each other very well and they have great chemistry. He really is perfect for her,” they shared. “Rich will absolutely be there in Vegas to support Adele whenever he can. They spend a lot of time together and they make a really cute couple.”