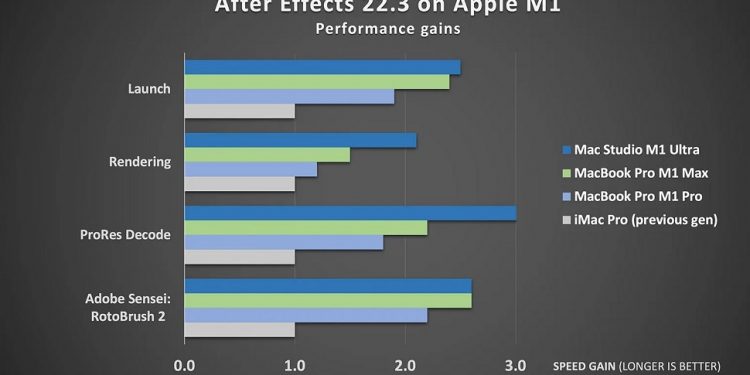 In benchmark tests released by the company, running After Effects on a high-end M1 Ultra Mac is now up to three times as fast, and those using the video effects software on standard M1-powered devices should see performance jump to double the speed.

According to Adobe, the power boost makes it easy for motion designers, “to explore ideas and iterate more quickly on their compositions.”

What else is new in Adobe After Effects?

Native support for Apple’s proprietary chip is just part of a wider package that’s being deployed by Adobe as it looks to better supply users across the world.

– After Effects and Premiere Pro subscribers now get free access to the Frame.io remote video collaboration service , which comes built into both the VFX tool and Adobe’s much-loved video editing software.

– With 3D making (yet another) comeback, Extended Viewer and Binning Indicators for 3D layers now make it easier for designers to visualize compositions and move through three-dimensional spaces in real-time.

The need for speed

Adobe clearly feels the need for speed – only last year, the software house unveiled Multi-Frame Rendering, boosting speeds by up to four times. This latest update continues a drive to improve motion graphics software performance and delivery for VFX artists.

However, Adobe warns that certain new features and functionalities will be limited or unavailable when using incompatible third-party plugins, or plugins that aren’t ported for Apple silicon, with users seeing a warning pop up when the VFX tool spots an issue at launch.

Adobe also confirmed users can even use older versions of Adobe After Effects on M1 chips – but you’ll need Apple’s Rosetta 2 emulation software to get it running.

The After Effects 22.3 update, which launches today (April 12 2022), is available to all users via a staggered roll-out from the Creative Cloud desktop app.