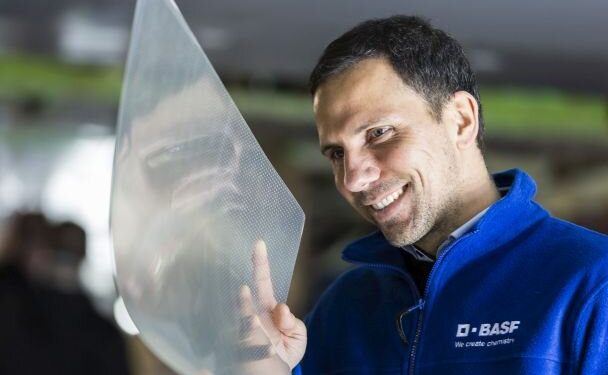 
A collaboration between engineers at Lufthansa Technik and chemicals and coatings manufacturer BASF has resulted in the creation of AeroSHARK—a thin film coating that can be applied to an aircraft’s outer skin to reduce drag and thus fuel consumption and carbon emissions. Swiss International Airlines has posted a blog entry on their website describing the film and the benefits the company expects to get from it. Lufthansa Technik has also posted a blog entry detailing the development of AeroSHARK.

The thin film was developed as part of an effort kicked off by engineers at Lufthansa looking for ways to reduce the cost of fuel for their planes. To that end, they looked to nature, and more specifically, sharks—creatures who have been streamlined over millions of years of evolution. The researchers found that shark skin is covered with millions of “riblets,” which are protrusions that run the length of their bodies. The engineers then teamed up with a group at BASF to create a similar type of skin for aircraft. The result was the creation of AeroSHARK, a clear, thin skin with millions of riblets, each just 50 micrometers high. Testing showed that the material reduces drag.

The researchers found that by applying the skin to the entire fuselage and engines of a Boeing 777, they could reduce fuel consumption by 1.1%. Swiss estimates that the skin will result in reductions in fuel consumption across its fleet by 4,800 metric tons a year, which, in turn, will result in reducing carbon emissions by 15,200 metric tons. They suggest that amount is equivalent to 87 long-haul flights from Zurich to Mumbai. Swiss plans to coat all 12 of its 777-300ER airplanes with AeroSHARK starting this summer. Meanwhile, Lufthansa has begun coating all of its large cargo aircraft with the new skin.

Swiss also notes that they will be working with Lufthansa Technik and BASF to collect data on the benefits of using AeroSHARK to further improve the performance of the skin and to find out if it can be used on the wings as well.

Is There a Link Between Vaping and Eating Disorders in the Young?