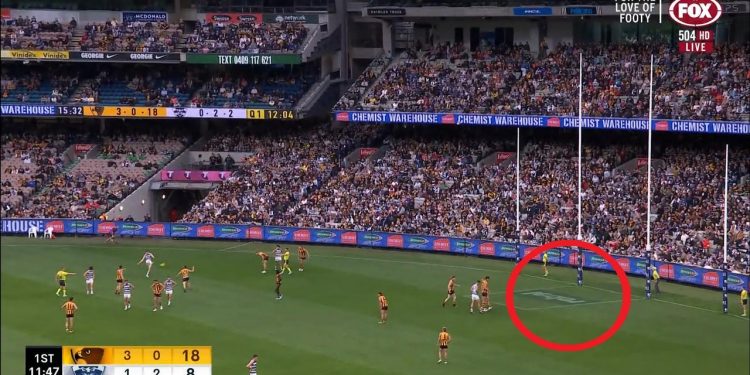 Hawthorn have copped a belting from a club champion after a disastrous brain fade that shouldn’t happen at elite level.

Hawthorn’s defence has copped an absolute hiding from cub champion Luke Hodge after a disastrous brain fart against Geelong.

The Hawks shocked Geelong with a first half physical onslaught, but there was one moment where the club was all at sea.

Stream every match of every round of the 2022 Toyota AFL Premiership Season Live & Ad-Break Free In-Play on Kayo. New to Kayo? Try 14-Days Free Now >

Jeremy Cameron was gifted Geelong’s first goal of the game when the Hawthorn defence inexplicably left the goal square empty as he lined up for a set shot 30m out on a difficult angle.

Cameron spotted the vacant goal square and calmly snapped around his body with the ball bouncing twice on its way through the middle.

“It’s enough to make an U12s coach pull his hair out, let alone at AFL level.”

Hodge was more than a little bit baffled.

“He goes for that rush on his non-preferred, three of them have all got their back to it. Even Sicily. Sam Mitchell would be sitting there shaking his head.