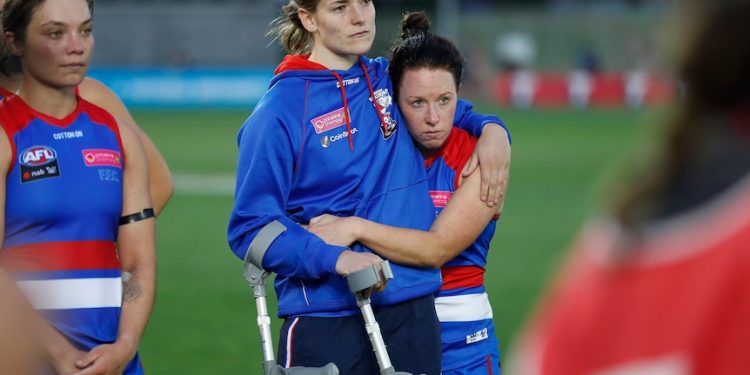 
Collingwood has confirmed that its AFLW co-captain — and 2021 competition co-winner of the best and fairest award — Bri Davey has suffered a ruptured ACL.

“Brianna Davey will miss the remainder of the 2022 AFLW season, with scans today confirming a ruptured anterior cruciate ligament (ACL) and tear in her medial collateral ligament (MCL) in her right knee,” the club statement read.

The 26-year-old was injured deep into the final quarter of the Magpies’ 19-point victory over Carlton at Ikon Park.

Davey’s injury is to the same ACL she first ruptured in 2018.

Season 2021 was Davey’s best in the competition, sharing the AFLW best and fairest award with the Dockers’ Kiara Bowers.

She also won her club’s best and fairest award and was named captain of the All-Australian side.

“We are all heartbroken for Bri,” Collingwood’s head of women’s football, Jess Burger, said.

“It’s very hard to see our captain go down with such a cruel injury, let alone someone who is at the top of their game.

“There is no doubt her injury has been felt not just within our team, but across the entire AFLW community.

“Bri is an incredibly strong, hard-working athlete. She is fiercely determined and cares deeply for her teammates.

“These attributes will give her great confidence to overcome the upcoming challenge she faces.

“She’s recovered from this injury before and knows what it takes to get herself back to being regarded as one of the competition’s best.

“Once the rawness and reality of the injury sets in, we have no doubt she’ll commence her rehabilitation in the pursuit of reclaiming her on-field best.

“Bri will continue to play a key role in leading this team from the sidelines this season and our entire program will wrap our arms around her during this difficult time.”

The club said Davey would consult with her surgeon later this week.

Earlier, the Western Bulldogs confirmed that their star player, Isabel (Izzy) Huntington, had ruptured her third ACL, and would not return to football in 2022.

“The 22-year-old sustained the injury [to her right ACL graft] during the second quarter of Saturday’s opening round loss to Melbourne, with scans also confirming damage to her lateral meniscus,” the club statement read.”

Huntington will also undergo a surgical consult this week.

“We are absolutely devastated for Izzy — she is a much-loved figure at the Kennel, and everyone is well aware of her injury battles, so we’re just heartbroken for her,” the Bulldogs’ general manager of women’s football, Debbie Lee, said.

“She worked extremely hard this preseason to get herself ready for this year, so it’s a real shame her 2022 campaign has been cut short.

“Izzy is a true professional though, and having been through this twice before she will know what’s required of her.

“As a club, we’ll continue to support her and the family in any way we can.”

Huntington was taken by the Western Bulldogs as their number one draft pick in 2017 and has played 20 games for the club.

She won the AFLW’s Rising Star award in 2020 and was selected as an All Australian in the same season. Bri Davey was one of three seemingly struck down with the devastating injury, while round one provided plenty of on-field highlights, writes Kate O’Halloran.

She has endured a torrid run of injuries, including a broken leg in 2015, her first injury to her left ACL in 2016 and then, just a week after her debut in 2018, a second ACL to the right knee.

In December 2018, Huntington then sprained the same knee, which kept her out of the 2019 season.

Davey and Huntington both went down with ACL injuries in week one of the 2022 AFLW season, while Brisbane are soon expected to provide an update on Kate Lutkins, who was best on ground in the grand final in 2021, and also appeared to injure her knee against the Crows.