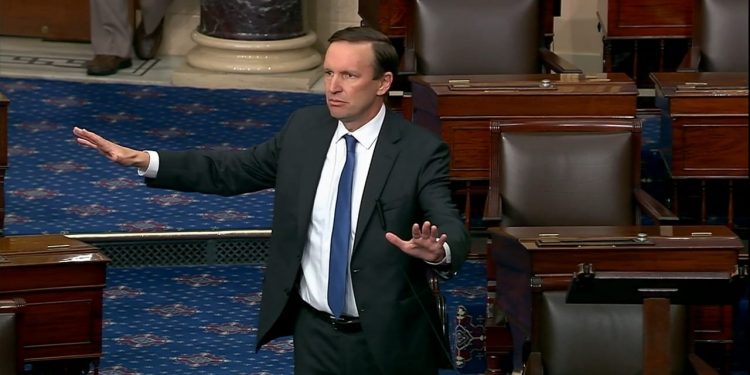 Sen. Chris Murphy, a Democrat from Connecticut who once held a 15-hour filibuster on the Senate floor on the need for stricter gun laws in the United States, returned there Tuesday night to plead with his colleagues to find a way to put politics aside and work together to stop the carnage of mass shootings.

Murphy was in the House in 2012 when a shooting took place in his district, at Sandy Hook Elementary School in Newtown, where 20 6- and 7-year-old children and six adults were killed. Now, a decade later, another gunman had entered an elementary school and taken the lives of 19 young children and two adults in Uvalde, Tex.

“What are we doing?” Murphy said, his voice raised. “Why are we here if not to try and make sure fewer schools and few communities go through what Sandy Hook has gone through, what Uvalde is going through. … I am here on this floor to beg, to literally get down on my hands and knees and beg my colleagues: Find a path forward here. Work with us to find a way to pass laws that make this less likely.”

The aftermath of Sandy Hook was the closest Congress has come in the past decade to passing any meaningful changes to the nation’s gun laws, but when a modest bill to strengthen background checks came to a vote in the Senate, only four Republicans voted for it, while four Democrats, none of whom are still serving, voted against it. Since then, there has been only frustration and anger after mass shootings in places of worship, in stores, at a concert, at a nightclub, at a yoga studio and in schools, making many fear that anyplace in the United States could be next.

House Speaker Nancy Pelosi (D-Calif.) charged Republicans with robbing the lives of young children, “who will never experience the joys of graduating from school, chasing the career of their dreams, falling in love, even starting a family of their own.” Describing the shooting as “a crisis of existential proportions,” Pelosi in a tweet called on senators to finally vote “House-passed bipartisan, commonsense, life-saving legislation into law.”

House Majority Leader Steny H. Hoyer (D-Md.) encapsulated the shock and anger felt by Democrats toward their Republican colleagues, also noting that legislation passed in the House last year had been languishing in the Senate.

“How many more times will Senate Republicans express outrage at horrific shootings like the one today in Uvalde, Texas, and then block meaningful, bipartisan background-check legislation supported by nine out of ten Americans and most responsible gun owners?” he said in a statement. “How many more times?”

From Sandy Hook to Buffalo and Uvalde: Ten years of failure on gun control

House Democrats passed two bills in March 2021 to strengthen the country’s gun laws by closing what they see as loopholes and expanding background checks for gun purchasers. If enacted, one bill would have tightened background-check rules to no longer allow a gun sale to proceed if a check is not complete after three days.

The “Charleston Loophole” legislation, named after the 2015 massacre at a Black church in South Carolina, would extend the review period to 20 days. A separate bill would have required background checks to close what is known as the “gun-show loophole,” which allows buyers to forgo a review if they buy a firearm at a gun show or online.

Both bills passed overwhelmingly with Democratic support but were never taken up in a 50-to-50 Senate, where 10 Republicans would be needed to send the legislation to the president’s desk.

Twitter users resurrected a tweet from Rep. Tony Gonzales (R-Tex.), who represents Uvalde, in which the congressman boasted about voting against the two bills, noting in the tweet that he remained “a proud supporter of the Second Amendment and will do everything I can to oppose gun grabs from the far Left.”

Gonzales on Tuesday added his voice to the chorus of lawmakers from both parties immediately sharing statements of horror and sadness over the shooting.

“As we learn more details of today’s events in Uvalde, I am heartbroken for our South Texas community. It is devastating when our innocent children become the victims of senseless violence. We are devastated,” he tweeted.

Sen. Ted Cruz (R-Tex.) said on Twitter that he was “completely sickened and heartbroken,” that he was “lifting up in prayer” for the community and that there had “been too many of these shootings.” Cruz, as well as former president Donald Trump and Texas Gov. Greg Abbott (R), is scheduled to speak Friday at the National Rifle Association’s annual meeting in Houston, about 275 miles from Uvalde.

Furious critics of Cruz tweeted angrily back at him, including Rep. Ruben Gallego (D-Ariz.), who wrote, “Just to be clear fuck you @tedcruz you fucking baby killer.”

Many lawmakers noted that the country was still reeling from an attack on a Black community in Buffalo a week ago that killed 10 people at a supermarket. After that apparently racially motivated attack, Democrats privately acknowledged that changes to gun laws would only stall in the Senate. Instead, they set their sights on fast-tracking a bill that would expand the ability of federal agencies to track and analyze any domestic-terrorism activity, including white-supremacy groups.

The House passed the legislation last Wednesday with overwhelming Democratic support. The legislation will be before the Senate on Thursday, but it’s unlikely it will gain the support of 10 Republicans necessary to overcome a filibuster.

“I’m sickened and angry. I’m furious that yet ANOTHER senseless school shooting has left at least 15 families without their loved ones — including 14 precious, innocent children and a dedicated educator — just days after 10 people were murdered in Buffalo,” tweeted Rep. C.A. Dutch Ruppersberger (D-Md.), after the initial casualty report, before the death toll rose. “To my colleagues across the aisle: we’ve had enough of your mere thoughts and prayers. We need action NOW.”

When gun laws fail to stop a mass shooting

Sen. Richard Blumenthal (D-Conn.), who was involved in the last significant effort to craft federal legislation responding to mass gun violence, after several mass shootings in summer 2019, said there remain “threads of hope” that a deal could be struck.

“I’m reliving the pain and grief that we felt in that parking lot as we saw parents who knew they would never again see a 5- or 6-year-old child and never again have that child to hug or kiss,” he said, referring to Sandy Hook. “I don’t know how you can see that happen and not feel, ‘I have to do something.’ ”

The 2019 talks centered on a potential “red flag” law, also known as extreme risk protection orders, that would allow authorities to keep guns away from individuals deemed to represent a threat.

Sen. Thom Tillis (R-N.C.) questioned the notion that Congress was obligated to do something, particularly with few facts known about the Uvalde shooting.

“I don’t believe that you’re going to find much in the record that this 18-year-old … was in any way affected by Congress’s actions or inaction,” he said.

Tillis said he was skeptical of red flag laws, saying “virtually every one that I’ve seen here has been one that sweeps up law-abiding gun owners [in] what I consider to be an overreach,” he said.

Blumenthal pushed back on the idea that any piece of legislation needed to be tailored to the circumstances of any particular shooting.

“There’s no single panacea here. There’s no way to match a single massacre with another single proposal. The point is, we know that the combination or one of these actions will save lives,” he said, adding: “There’s no excuse for inaction. In fact, inaction is complicity if my Republican colleagues fail to put their votes where their thoughts and prayers are.”