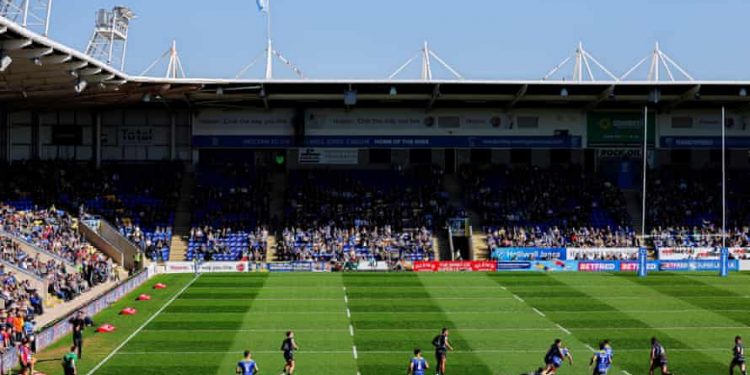 
It’s taken seven years, but Super League may be about to tick off a key performance indicator. In 2015, the Rugby Football League said they wanted to sell out 10 games a season. Until this year, you could count sold-out fixtures on one hand. But as the Easter Rivals Round arrives, the RFL are rushing towards their target.

Castleford filled their 10,500 spaces for their season-opener against Salford, and broke 10,000 again against Hull FC. Hull KR sold out last week’s game with Warrington and Craven Park will again be full for the derby on Good Friday, when a capacity 17,980 is also expected to see the top two – Saints and Wigan – meet in St Helens.

While fans are not jammed in everywhere, most grounds are busier. When Super League started in 1996, three clubs averaged five-figure gates. That’s now five, even after the demise of Bradford Bulls.

Building new stadiums and revamping old grounds has been key. Comparing average crowds in the first five seasons of Super League and the five campaigns before the pandemic (2015 to 2019), Wigan’s gates rose from around 10,000 to 12,600 despite their despised move from Central Park to Robin Park; St Helens grew from under 9,000 at Knowsley Road to over 11,000 at Langtree Park and up to 13,200 so far this season; and Leeds’ wildly fluctuating attendances at a redeveloped Headingley are still up by more than 2,000 a game.

Two clubs have pretty much doubled their crowds: Hull and Warrington. They have four things in common: 21st-century facilities, large populations, ambitious owners and no Super League titles. Hull averaged around 6,000 at the Boulevard in their first five seasons in Super League; they are up to 11,500 in their last five in West Park. Likewise Warrington, who have grown from 5,400 at Wilderspool to averages of 10,200 before lockdown. Imagine what their numbers would be if they brought home the bacon from Old Trafford.

Catchment sizes matter. Leeds has a population of 800,000 people and there are a third of a million in the borough of Wigan. That’s a lot of potential supporters. Warrington are still only pulling in 5% of their growing 210,000 population, leaving them serious room to expand. Hull FC and Hull KR bring in just shy of 20,000 fans between them, which still gives them serious room for growth in a city of 261,000.

Salford are the exception. Despite a huge catchment area, they are watched by a thousand fewer fans at the AJ Bell Stadium, their out-of-town rental, than they were in the late 1990s at their own ageing but beloved Willows home. Being surrounded by other successful clubs in all three codes hardly helps.

The composition of Super League makes growing easier for some clubs than others. When the usual format of four Lancashire clubs, four West Yorkshire, two Humberside and two from elsewhere distorts – such as having six north-west clubs in 2017 – the latecomers enter a marketplace that is already elbow to elbow with stallholders.

Huddersfield, Wakefield and Castleford deserve respect for building attendances while competing beside Rhinos territory. Huddersfield’s crowds have only edged up from 3,800 to 5,600 but that is a 68% rise, while Wakefield’s have gone up by a few hundred to 5,000, and Castleford’s have increased by around 1,500 to 7,600. Dilapidated grounds have left Cas and Trinity as back markers, having to reinvent their home games as true-grit retro experiences, a flashback to how things used to be. That has limited appeal but both Wakefield and Castleford can bank on bigger gates once they have redeveloped their ancient homes.

Rugby league fans may look longingly at packed houses in the US but they worked at it – and still do. There were more empty seats at the first Super Bowl in 1967 (32,000) than at last autumn’s Grand Final (29,000). There will be more fans in East Hull, St Helens and Perpignan this week than the 10,665 who saw the Miami Dolphins play the Patriots in Boston in 1969. And Cas can also console themselves with knowing they are attracting bigger gates than the 7,889 average who watched MLB team Miami Marlins in 2019.

Down Under, the NRL’s average crowd of 15,000 puts them level with rugby union’s three biggest leagues (Top 14, Premiership and Super Rugby), but Super League crowds are still nip and tuck with Europe’s United Rugby Championship, top domestic football leagues in Sweden and South Korea, and bigger than Serie B in Italy.

Before this year’s post-pandemic leap, league attendances were remarkably consistent. In the five years before Covid, St Helens’ average gate did not fluctuate by more than a thousand, Hull’s by just 700. Until this season’s reboot, Hull KR had been averaging about 8,000 since 2007; Cas can budget for 7,500 every year, Huddersfield 5,500, Wakefield 5,000. Catalans tend to bring in around 9,000 per game.

The number of fans going to rugby league games is the same now as in the mid-1960s – two million a season – but bigger clubs now attract a higher percentage of those fans. In 1965-66, the 10 biggest crowds averaged 7,336. That is now over 9,000. The only difference is who is top: Hull KR were the biggest with an average of 16,000; Swinton were on a par with Leeds and Warrington.

Although the Premier League has boomed over the last 30 years, crowds in the third tier of English football have remained remarkably similar to those in elite rugby league. Thirty-five years ago, the Stones Bitter Championship averaged 332 more fans than football’s Division Three (4,844 to 4,512). When the Premier League launched in 1992, the difference was just 201 (6,511 and 6,310); it was 400 in the final season before Super League; and a mere 104 in 2019.

Super League certainly looks on course to beat 2019’s average of 8,828. It doesn’t seem unreasonable to expect all clubs to grow their crowds and, if every club hit a 10-year high this season, or they all rose by 10%, Super League would soon hit the magic 10,000 mark at last – and another of the RFL’s ambitions would be realised.

Just six months before the World Cup, Ireland have surprisingly replaced coach Stuart Littler with his former teammate and long-term assistant Ged Corcoran. The fact that the quarter-finalists at this year’s World Cup will qualify automatically for the next tournament is a boon to Ireland, who could field an all-Super League team. They now know that victory over Lebanon and Jamaica in Group C will not only secure them a quarter-final shot at Australia, but also a ticket to France 2025.

Talking of crowds, an impressive 1,473 were at Penryn on Sunday to see history made as Cornwall RLFC played their first home game in League 1. The new boys – who are a mixture of the best league players in the county, some union converts and a few experienced old heads (including the former Leeds and Ireland forward Anthony Mullally, who runs a surf school there) – are having little problem scoring points: they got 22 in their opener in Colwyn Bay last week and 14 this. Their issue is conceding; North Wales posted 66, Midlands Hurricanes 60. Their veteran coach, Neil Kelly, has work to do.