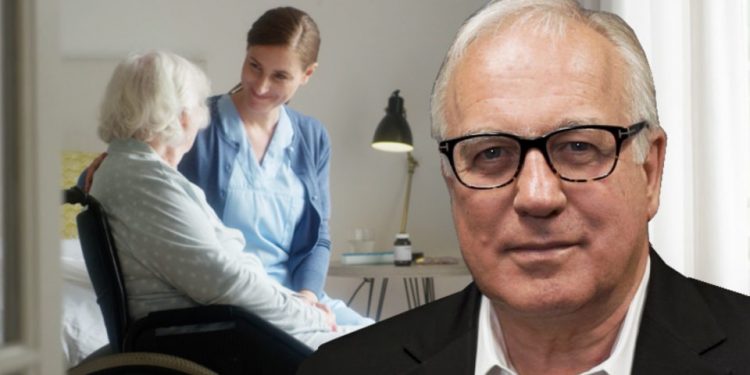 
It’s obvious that aged care is underfunded. Everybody knows it, and elderly residents will see it displayed in crisp khaki next week when soldiers show up to call the bingo.

The Australian Defence Force is the only part of the government that is not underfunded.

After more than 40 inquiries and reviews into aged care since 1981, culminating in last year’s royal commission, it remains in perpetual crisis.

And although there have been endless efforts to improve its oversight and regulation, the core problem is money – no better illustrated than by the appearance of well-paid members of the ADF in the nursing homes to fill staffing gaps.

The lowest-paid private in the army gets $65,544 a year, 50 per cent more than the lowest paid aged-care employee.

A good case can be made for that gap to work the other way around, given the relative importance of the tasks being performed, but let’s put that to one side.

The obvious problem with aged-care funding, and therefore the wages, expertise and supply of staff, is that the sector is constantly competing for government oil against squeakier wheels.

Aged care is a quiet, embarrassed industry. The elderly don’t make a fuss, and their children can be ashamed of having to put their parents in, often against their will, so they don’t speak up much either; shame is a powerful silencer.

And by the way, regulation doesn’t work because cancellation of a licence is an empty threat: If an aged-care home is closed down for misdemeanours, the residents are rendered chaotically homeless.

The aged-care royal commission was appointed in response to horror stories in the media, but in the end it was mainly designed to ensure the sector stayed within the health department and its budget.

That was a good idea – far too sensible for this government – but Pagone didn’t go far enough.

Not only should there be an independent statutory body running aged care, it should be funded by a national compulsory insurance scheme, with a separate body running the money.

The size of the compulsory deductions should be calculated actuarially, according to what is needed rather than what the Treasurer of the day decides he or she can spare.

According to the royal commission’s final report, a total of $27 billion was spent on aged care in 2018-19, the last year for which data is available, of which $19.9 billion, or three-quarters, came from taxes.

Yes, a new aged-care insurance deduction would be a tax, but it is already paid for mainly by taxes. It’s just that the decision about the amount is not based on need, but on the Expenditure Review Committee’s juggling; underfunding and misery is the result.

The idea of a national insurance scheme is not new: It was first conceived in the 1923 Royal Commission on National Insurance, appointed by the conservative Nationalist Party Prime Minister Stanley Bruce, and chaired by Tasmanian Nationalist Senator John Millen.

The commission took four years and came up with a compulsory insurance scheme that would cover everything: Sickness, invalidity (disability), maternity and old age.

Millen recommended that the rate of contribution be “actuarially calculated for entrants at age 16”, and that the “funds should be invested in works which will extend the social institutions available to insured persons”.

Stanley Bruce actually drafted legislation to put the recommendations into effect and introduced it into Parliament in 1928, but it lapsed when he lost the 1929 election to the Labor Party’s Jim Scullen.

Joseph Lyons, the founding leader of the United Australia Party, which was Robert Menzies’ first party and forerunner of the Liberal Party, had another go at it in 1939, but once again it lapsed when war broke out.

Note that national insurance for sickness, disability, maternity and old age was conservative party policy, kyboshed by Labor, but in the end it was Labor that took care of the first three through Medicare, the NDIS and paid parental leave, and it has been the Coalition that has undermined each of those things and made a complete mess of aged care.

There are two reasons for that: First, they have always seen aged care as “health”, so it has been the poor cousin in the health department, and second, the Coalition is obsessed with tax cuts, so funding the welfare of citizens is well down the list of priorities.

In 2017, Malcolm Turnbull finally realised that at the very least a separate minister for aged care was needed in Cabinet, so he appointed Ken Wyatt as Minister for Aged Care.

When Wyatt was made Minister for Indigenous Australians after the 2019 election, Scott Morrison tapped Tasmanian Senator Richard Colbeck to be Minister for Aged Care, as well as Minister for Sport (of course – they go nicely together, right?).

That didn’t go well, and in late 2020, when 350 aged-care residents died of COVID-19, Colbeck was caught out in an interview, unable to say how many had died, and then he was censured by the Senate for failing to take responsibility for the crisis in aged care.

He wasn’t sacked, since Scott Morrison never sacks anyone, but the ministry was merged back into health, and Greg Hunt became Minister for Health and Aged Care.

Colbeck was kept on as Minister for Aged Care Services, whatever that means, where he has maintained solid consistency in incompetence and not taking responsibility for the crisis.

So after just two years the experiment of having a separate minister for aged care came to an end, for the simple reason that a dill had been given the job.

The ALP has a shadow minister for health and ageing (Mark Butler), which might mean he’ll be in charge of aged care as well as health, continuing the disastrous merging of the two, but it might also mean he’s just the minister for getting old.

Archives threatened to go to Congress over Trump records

Archives threatened to go to Congress over Trump records