In an aged care sector expected to need 110,000 extra workers by 2030 as the population ages, wages are so low that people are leaving the industry because they can’t survive, according to a new report.

The research, from AACC (Australian Aged Care Collaboration), found that the average single worker with no children would finish a week with only $112 in hand after normal living costs were paid.

A single parent would finish up with a deficit of $148, while a carer who was part of a couple with children would end up with $17 in savings. 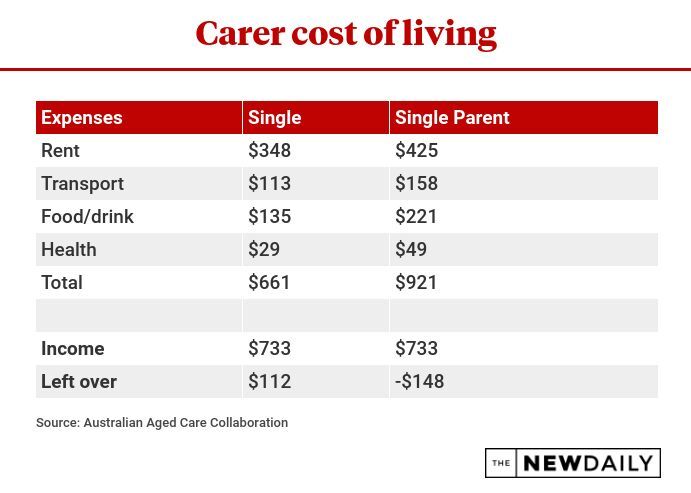 And the costs counted are only weekly necessities. Workers would also have to budget for utilities, telecoms and incidental expenses which would put many in arrears when they appear.

Consumer pleasures are out of the question.

Fiona McDonald, a policy director with the Centre for Future Work, said the figures on carer earnings were likely to be worse than the AACC actually found.

“A high percentage of carers are not in a full-time job and there’s also a really high proportion of underemployment in the sector.”

The structure of the industry is moving further towards part-time work and as a result it is “difficult to earn a living”, Dr McDonald said.

The way the system increasingly works is that a person can be employed under a minimum number of hours then “they have to flex upwards”.

That means people can have their working hours pushed up and down “without even being a casual employee” earning casual loadings, she said.

“You can be a very insecure worker with a lot of working time unpredictability.”

The first would see both an increase in spending on wages and quality of care, while the second would see carers paid more for current duties, and then, when the work value case is completed, they would receive pay increases along the lines of its findings.

The third recommendation would see a range of workers with different skills introduced to the sector to increase flexibility.

But Dr McDonald said she was “not too keen” on the idea of workforce participation supplements because it was difficult to ensure they were spent in ways that would result in pay rises for workers.

“The sector itself has been left to resolve some of these issues in the past and they have not been particularly accountable as to where the money was being directed.”

However, increases in award pay were vital and the work value case had the potential to reset carer work in relation to pay in other industries.

While the union and employers had joined the Fair Work Commission case meaning they would support its findings, “to date the government has not supported it”, Dr McDonald said.

Angela Jackson, lead economist with Impact Economics, said shortages of aged care staff were emerging across the particular regions, “partly as a result of the pause in migration, but also as the [Aged Care] royal commission found, pay and conditions in the sector make it difficult to attract and retain staff”.

Residential and home care workers’ median pay was $28.70 per hour, while a bartender earned $30 and a cashier $31.79 per hour, the research found.

“So if you can earn more working at Bunnings than you can in aged care then people are going to do that,” Dr Jackson said.

“Working in aged care is not easy.”

A spokeswoman for AACC said funding pay increases in aged care had been made more difficult by government moves to defund the system over a decade or more.

“The royal commission found that $1 billion had been removed from the system over that time.”

Toyota inks charging deal ahead of US EV launch

US official meets with Brittney Griner

US official meets with Brittney Griner