Agent’s Take: What If Dak Prescott played in 2021 on a second franchise tag instead of signing long-term deal? 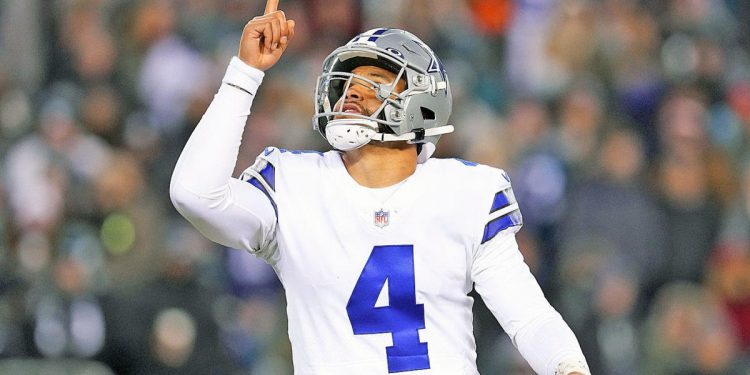 
The Cowboys’ 23-17 loss to the 49ers in the wild card playoff round as the NFC’s third seed ended in a nightmare. A 17-yard quarterback draw by Dak Prescott with 14 seconds remaining took too much time for Dallas to kill the clock to run a final play from San Francisco’s 24-yard line for a potential game-winning touchdown.

Fortunately for Dallas, another nightmare has been avoided because Prescott’s preference was a long-term deal rather than playing the 2021 season under a second franchise tag for $37,690,080. Prescott signed a four-year, $160 million contract worth up to $164 million through incentives in March. The deal has $126 million of guarantees, which includes a then-NFL record $95 million fully guaranteed at signing. Prescott’s $66 million signing bonus, which is part of the $95 million, is the largest in league history.

The last quarterback to embrace the franchise tag was Kirk Cousins. After playing under franchise tags for consecutive seasons with the Washington Football Team in 2016 and 2017, Cousins broke new ground by signing the NFL’s first lucrative fully guaranteed veteran contract with the Vikings in 2018 as an unrestricted free agent. Cousins’ three-year, $84 million deal, which made him the league’s highest-paid player at $28 million per year, was worth up to $90 million with incentives. He had regressed statistically in 2017 from the previous year and Washington missed the playoffs with a 7-9 record for third place in the NFC East when he got the deal.

The Cowboys would have been prohibited from signing Prescott long-term until Jan. 10, after the regular season had ended a day earlier, if he spent 2021 on a second franchise tag. The roster composition would have changed because the second franchise tag would have been nearly $15.5 million more under the 2021 salary cap than Prescott’s $22.2 million 2021 cap number when his four-year deal was signed. A $6.25 million salary conversion in September as the start of the regular season was approaching freed up $5 million of cap space to bring the cap number difference to almost $20.5 million.

Dallas designating Prescott as a franchise player for a third consecutive year would have been cost-prohibitive. A third and final franchise tag with a 44% increase over the 2021 figure would have been $54,274,752.

The Cowboys aren’t in great shape salary cap-wise for the 2022 league year. There are currently $222.46 million in 2022 cap commitments, which are the NFL’s fourth most, with 42 players under contract and $3.96 million of cap space being carried over to the 2022 league year, according to NFLPA data. Only the top 51 salaries (i.e.; cap numbers) matter with offseason salary cap accounting rules. The 2022 salary cap is expected to be at the $208.2 million ceiling the NFL and NFLPA agreed to in May. Once there are 51 players counting, Dallas is projected to be approximately $18 million over this ceiling.

Obviously, Prescott’s $34.45 million 2022 cap number wouldn’t be a part of the equation without a long-term deal. Even when the nearly $20.5 million difference in Prescott’s actual $17.2 million 2021 cap number and the $37,690,080 is taken into account, Dallas would only have a little more than $1 million of 2022 cap space. A lot of salary cap gymnastics with restructuring contracts and releasing players would have been necessary to accommodate a Prescott franchise tag at $54,274,752.

Athletes First’s Todd France, Prescott agent, would be licking his chops with his client on the verge of free agency. In France’s shoes, the only way I would do a deal with Dallas before the two-day window opened on March 14 prior to the start of free agency — when NFL teams are allowed to negotiate with the agents of prospective unrestricted free agents — would be if specifically instructed by Prescott that he didn’t want to test the market.

Following the Cousins blueprint where Prescott became the NFL’s highest-paid player on a fully guaranteed three-year contract would have been my objective. Mahomes’ $45 million per year wouldn’t be the standard. Instead, it would be Allen’s league-leading $137,945,405 in the first three new contract years, which averages $45,981,802 per year. The idea would be for Prescott to be positioned to hit the open market as a 31-year-old.

My target for the base value would be between $140 million and $145 million ($46,666,667 and $48,333,333 per year). There would need to be at least $2 million in annual incentives, similar to the Cousins deal, so the maximum value would top Allen’s $48 million per year in a worst-case scenario. Cousins’ no-trade clause and language preventing a transition player designation would have also been necessities. Voiding/dummy 2025 and 2026 contract years could be added if necessary for salary cap purposes.

Prescott’s playoff shortcomings wouldn’t be a consideration for me. Cowboys legendary former head coach Jimmy Johnson, in reference to a Fox Sports NFL graphic pointing out that Prescott and Tony Romo have the same 1-3 playoff record through their first six NFL seasons, called it “a shame” on Twitter. The 49ers game was Prescott’s worst playoff performance statistically. Prescott completed a playoff-low 53.5% of his passes (23 of 43 pass attempts) for a 69.3 passer rating, which is easily his worst in postseason play.

The six-game “slump” in the middle of the season, after Prescott’s right calf strain during Week 6’s contest against the Patriots, would also be dismissed. During that 3-3 six-game stretch, Prescott completed 63.2% of his passes (151 of 239) for 1,568 yards with eight touchdowns and six interceptions to post an 82.8 passer rating.

Overall, Prescott ranked near the top in several statistical categories this season. He ranked third with a 104.2 passing rating. Prescott had the fourth-best completion percentage at 68.8% and his 37 touchdown passes are a Cowboys single-season record and tied for the fourth most in the league. He ranked seventh with 4,449 passing yards. Prescott also won NFC Offensive Player of the Week honors on three separate occasions, which was more than anybody else this season.

I consulted a few current and former NFL executives I have good relationships with about my Prescott scenario. Their responses were made only under the condition of anonymity except for former longtime Eagles president and Browns CEO Joe Banner, whose approach to navigating the salary cap and negotiating player contracts was instrumental in Philadelphia going to five NFC Championship Games and one Super Bowl in an eight-year span during the 2000s.

Everyone was in agreement that Prescott would become the league’s highest-paid player under these circumstances although nobody thought he was in the top quarterback tier (Tom Brady, Mahomes, Aaron Rodgers, etc). Prescott almost unanimously fit into the second tier and is considered among the league’s 10 best quarterbacks. The least complimentary comment about Prescott’s abilities came from a former AFC team executive. He called Prescott “a better version of Kirk Cousins.”

Nobody balked at the low end of my target range. One AFC team negotiator thought Prescott would have so much leverage that Dallas would be forced to give him whatever he wanted. An AFC general manager said, “I don’t know about fully guaranteed but Prescott would have the most player-friendly contract in the NFL.”

Banner never considered a third franchise tag as a legitimate option when running teams because of the cost. He also raised an interesting point about why Cowboys owner Jerry Jones would meet Prescott’s contract demands. It was Jones who learned through experience how hard it was to find a good quarterback after Troy Aikman retired and wouldn’t let one, particularly at Prescott’s age (he turns 29 in July), walk out the door.

An NFC team negotiator suggested Prescott shooting for a five-year contract, especially if the entire amount was fully guaranteed. He would have the security to forego a three-year deal and still be able to command another top contract when it expired. Banner was the only other person comfortable with potentially fully guaranteeing five years.

Structurally, the NFC team negotiator envisioned more modest cap numbers in the first two years which would start ballooning in 2024 when there would be substantial salary cap growth. I didn’t get an idea of what the 2024 salary cap would be from the current team executives. The $225 million-to-$230 million range is being used by a couple of teams for the 2023 salary cap projections.

I got a mixed response when I raised the idea of $50 million per year for Prescott. The AFC general manager thought it was too much. The NFC team negotiator didn’t dismiss it outright but would be spending a lot of time on plan B, especially with a five-year commitment along with extremely player-friendly guarantees.

Fifty million per year would be close to Banner’s breaking point but he didn’t give a specific figure. He indicated it would take a “very aggressive number.” That’s because a really good quarterback should give a team a chance almost every year in his estimation. The former AFC executive said, “If you think you’ve found your franchise quarterback, then you just bite the bullet.”

I also asked how free agency would play out if Dallas passed. The consensus was a weak quarterback draft class compared to recent years and the uncertainty around the availability of Rodgers and Russell Wilson in a trade, as well as Deshaun Watson’s situation, were considered beneficial to Prescott.

It was unanimous that Washington would make a run at Prescott because of the need for quarterback stability and the chance to weaken a division rival. The Broncos and Panthers were mentioned as next most frequent potential suitors. A couple of people suggested that the rest of the NFC East would purse Prescott for similar reasons as Washington. The majority thought France being able to play at least two teams off against each other in free agency would produce the highest average yearly salary for Prescott.

“If players (meaning quarterbacks) were smart, they would be more like Kirk Cousins,” said the former AFC team executive. “That’s how to get the best deal financially. It just doesn’t happen for a variety of reasons.” Dallas should thank their lucky stars Prescott didn’t go the Cousins route. Jones would have been caught between a rock and a hard place since really good quarterbacks entering their prime are never on the cusp of hitting free agency. It remains to be seen when a quarterback will follow Cousins’ lead.

The fashion world mourns André Leon Talley: ‘No one was more soulful and grander than you were’