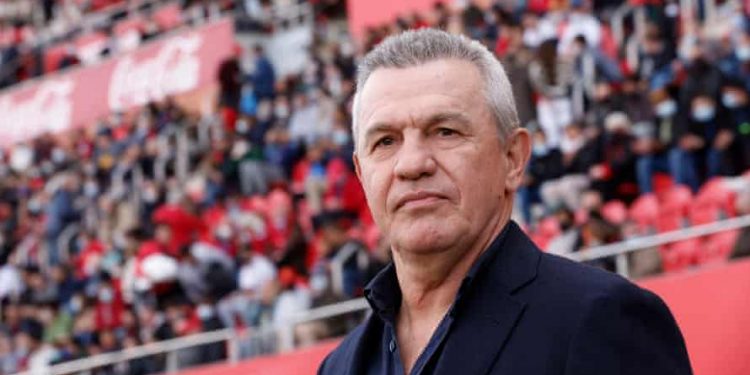 
Javier Aguirre was first into the dressing room and first out again. “Those bastards put the music on full blast, so I had to leave,” the Real Mallorca manager said when he reappeared in the tunnel, and you couldn’t really blame him. Couldn’t really blame them, either. They had waited a long time for this, after all: Mallorca hadn’t even picked up a point since Valentine’s Day, seven consecutive defeats seeing them slip into the relegation zone and the coach who had brought them up depart in tears, sacked in favour of a final throw of the dice, but now at last they had won again. And against the champions too. “Liberation,” defender Pablo Maffeo called it once he had hauled himself back onto his feet at Son Moix, and it showed. That was Saturday afternoon; by the end of a wild weekend, it felt even better, everything falling into place for the first time in weeks.

Vedat Muriqi’s penalty had given Mallorca a 1-0 lead over Atlético Madrid with 22 minutes remaining that became 32. The week before they had been beaten in the 82nd minute at Getafe, against Betis it had been the 83rd, and Celta defeated them 4-3 in the 97th so they knew it wasn’t over even deep into 10 minutes of added time, clinging to a lifeline that could be lost. Every tackle and header clear was celebrated. Behind the goal, Jan Oblak confronted the ball boys. Idrissu Baba got hit full in the face. Antonio Raíllo fell too. And if, when asked how his injured player was, Aguirre admitted “faking it”, the tension was real – whistles frantic as the clock ticked towards three digits.

Afterwards, Aguirre was asked what it had been like for him, how he had lived it all. “Surprisingly calmly,” he replied. Having taken over as coach from Luis García 20 days before, called in on another rescue mission – “I climbed aboard a boat out on the open sea, defeat, defeat, defeat, watching [the shore] slip away” – he had lost to a single goal in his opening game at Getafe and this was his first game at home. “It was fantastic,” he said. “Those final minutes were a fantastic experience: I looked up and I was delighted, all the people behind the team all game, all the flags, the noise on the crosses, the headers, whistling the referee. I was quite calm: maybe it’s my age. But the bench wasn’t, that’s the truth.”

Alongside him, no one was sitting any more as those final seconds played out. Ángel Rodríguez was on his knees. When Take Kubo got the ball and headed up the wing, they all pointed frantically at the corner. When he lost it, they all panicked. But Maffeo came flying in and made the tackle, the whistle went, and they ran onto the pitch while Aguirre turned straight down the tunnel. Maffeo sank to his knees, the poster from Platoon. Kubo did a roly-poly. Dani Rodríguez cried. Stumbling, shoulders rolling, barely able to walk, Jaume Costa guided him like he was helping a drunk pal get home from the pub. Around the ground they sang: “Yes, we can!”

And that’s a start. It wasn’t pretty, Palma newspaper Última Hora calling the first half “horrible,” “soporific” and “primitive”, 45 minutes in which the best thing that happened was the whistle that brought them to an end. And yet they also called it “the perfect afternoon.” The front page declared this a “revival”. Inside it said: “Eight weeks later, Mallorca opened their eyes again, breathed again, recovered hope and a pulse; they lived again. They broke out of the glass cell that imprisoned them, smashing it into a thousand pieces.”

They had needed a debatable penalty to win it, Oblak ignored advice from the Jackson Five and blamed it on the sunshine, and it wasn’t even the first time Mallorca had beaten Atlético this season, so they know his doesn’t guarantee anything. But this win had pulled them back out of the relegation zone and they had desperately needed it. Aguirre had said the day before they just had to win any way they can, if only to believe that they actually can.

Aguirre is “fresh air,” Maffeo said afterwards. Usually, he turns it blue. Listen to his interviews and they’re full of bleeps; listen to him talk, uncensored, and there are cabrones, carambas and chinga madres all over the place. Charismatic and direct, he is honest, fantastically engaging company, seemingly forever cackling like Sid James. There is something very seductive about him, swiftly getting under his players’ skin and everyone else’s too, and this is his kind of challenge. Which is also his problem: his coaching career goes back almost 30 years and has taken him all over the world – although he still regrets not getting the job at Athletic or West Brom – but there is a risk of him being cast only as a man to call when you’re in trouble, a fast fix, which is why this time he insisted on a second year if he saves Mallorca.

Thing is, that “if” comes first – and that’s where he comes in. Kicking about at home, keen to work again even at 63 years old, his wife keen for him to work again too, it took Aguirre four minutes to accept the offer. It helped that there are, he thinks, seven or eight teams with whom Mallorca can realistically compete, which brings hope. Survival was not such a monumental task, if they could find the formula.

This is not really about style, although it starts with the defence, with what he calls “stopping the bleeding”; it’s more about the mind, convincing them they can compete, confronting reality. “The player has to understand where he is. He can’t keep playing as if there’s no problem: there is,” Aguirre says. “You have to chase every ball as if it was your last; if you don’t, you’re no use for primera.” Beating the champions offered a path, taking them into 17th, on 29 points. Better still, everything else fell their way too on an extraordinary weekend at the bottom, a series of interconnected and often absurd stories of suffering from all over Spain, fate in each other’s hands.

On Friday night, Granada (16th, 29 points) went from 2-2 to 4-2 down at Sevilla, conceding goals in the 93rd and 99th minutes. Immediately before Mallorca kicked off against Atlético, the Cádiz coach Sergio González sat with his head in his hands having seen his team (18th, 28 points) lead Real Betis only to concede an equaliser on 79 minutes. Then, with five minutes to go, he saw them give away a “joke” penalty: Rubén Alcaraz swiped, missed the ball entirely and instead kicked Borja Iglesias, giving away a penalty which Iglesias scored. “We didn’t deserve that,” Sergio said, and he wasn’t alone in feeling that way.

The next day, Elche (15th, 31 points) led early against Real Sociedad, but lost 2-1. “We didn’t want this, but that’s football,” the manager Francisco said after their fifth defeat in six, safety suddenly no longer secure. Worse was Alavés (20th, 31 points), under their third coach of the season and beaten by an Ante Budimir goal in the 93rd minute at Osasuna. “I have no words,” goalkeeper Fernando Pacheco said afterwards, a broken man suspecting the last chance has gone. “It’s been happening all year: we put our hearts into it, but nothing comes off. It’s very hard to take.” And in a game that had everything, including a referee taking out a player, Levante (19th, 22 points) had three penalties against Barcelona, scored two of them, saw the goal of the season cleared off the line, led 1-0, came back from 2-1 down, and lost to a 92nd-minute Luuk de Jong winner. “We were so close,” said captain José Luis Morales.

In the end, the only team in the bottom nine to win was Mallorca, a group of fans still waiting for their coach 90 minutes after full time. They were a bit drunk, Aguirre admitted, but they were convinced and now maybe the players can be too. “They know how to play football, hell, but there was a weight on their shoulders that got bigger and bigger and bigger,” he said. “Today, whoa: it’s a huge weight off. You get out of the relegation zone, release the pressure. Do you know what it’s like to go seven weeks losing, going home and thinking ‘I did everything I could … and I lost again’? Now at last they can have a couple of beers, see their wives and kids, see their friends, enjoy themselves after so long.” Back in the dressing room they had already started, volume turned up as loud as it would go.

Cyberpunk 2077: CDPR Dev Says There’s Still Work To Be Done, Reaffirms Expansions Are On The Way

Cyberpunk 2077: CDPR Dev Says There’s Still Work To Be Done, Reaffirms Expansions Are On The Way