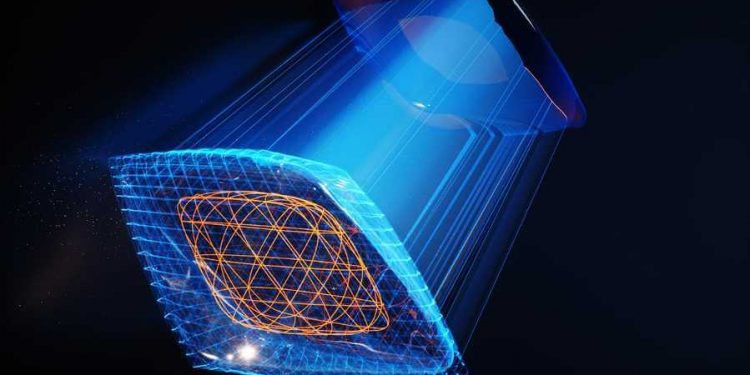 
In the battery, Chueh noted, it is not temperature that causes the fissures, but the mechanical strain the materials have on one another with each charge cycle.

“Unfortunately, we don’t know much about what’s happening at the nanoscale where atoms bond,” Chueh said. “These new high-resolution microscopy techniques allow us to see it and AI helps us understand what is happening. For the first time, we can visualize and measure these forces at the single nanometer scale.”

Chueh said that the performance of any given material is a function of both its chemistry and the physical interaction in the material at the atomistic scale, what he refers to as “chemo-mechanics.” What’s more, the smaller things get and the more diverse the atoms making up the material are, the harder it is to predict how the material will behave. Enter AI.

Using AI for image analysis is not new, but using it to study atomic interactions at the smallest of scales is. In medicine, artificial intelligence has become a transformative tool in analyzing images of everything from faulty knees to deadly cancers. Meanwhile, in materials science, new methods of high-resolution X-ray, electron and neutron microscopy are allowing direct visualization at the nanoscale.

For their subject, the team chose lithium iron phosphate or “LFP,” a well-known material used in positive electrodes that is gaining popularity with electric car makers and other battery-intensive businesses. This electrode does not contain cobalt and nickel, which are used in many commercially available batteries. LFP batteries are also safer, though they hold less electricity per pound.

Though LFP has been studied for two decades, two key outstanding technical questions could only be guessed at until now. The first involves understanding the elasticity and deformation of the material as it charges and discharges. The second pertains to how it expands and contracts in a specific regime where the LFP is partially stable, or “metastable.”

Deng helped explain both for the first time using his image-learning techniques, which he applied to a series of two-dimensional images produced by a scanning transmission electron microscope, and to advanced (spectro-ptychography) X-ray images. The findings, he said, are important to a battery’s capacity, energy retention and rate. Better yet, he thinks it is generalizable to most crystalline materials that might also make good electrodes.

“AI can help us understand these physical relationships that are key to predicting how a new battery will perform, how dependable it will be in real-world use and how the material degrades over time,” Deng said.

Chueh calls Deng an “academic entrepreneur.” He is a chemist by background but taught himself the nuances of artificial intelligence to take on this challenge. Deng said the approach is a form of “inverse learning” in which the result is known – high-resolution still images of degraded LFP – and AI helps reconstruct the physics to explain how it got that way. That new knowledge, in turn, becomes the basis for improving the materials.

Deng noted that previous non-AI studies have illuminated correlations in how mechanical stresses affect electrode durability, but this new approach provides both an exciting way and the motivation to develop a more fundamental understanding of the mechanics at play.

Next up, the researchers say they are already at work to bring their techniques to elucidate promising new battery designs at the atomic level. One outcome might be new battery control software that manages charging and discharging in ways that can improve battery life. Another exciting avenue is the development of more accurate computational models that allow battery engineers to explore alternative electrode materials on a computer instead of in a lab.

“That work is already underway,” Chueh said. “AI can help us look at old materials in new ways and maybe identify some promising alternatives from some as-yet-unknown materials.”

Chueh is also a senior fellow at Stanford’s Precourt Institute for Energy and a principal investigator at the Stanford Institute for Materials & Energy Sciences. Other Stanford co-authors not mentioned are Wei Cai, professor of mechanical engineering; Norman Jin, PhD ’21; PhD students Eder Giovanni Lomeli and Rui Yan; and Jueyi Liu, MS ’21. Other co-authors of this study are researchers at Massachusetts Institute of Technology, Lawrence Berkeley National Laboratory, University of Lyon, Chungbuk National University and the University of California-Berkeley.

This research was supported by the Toyota Research Institute. Additional support was provided by the U.S. Department of Energy, Lawrence Berkeley National Laboratory, SLAC National Accelerator Laboratory and the National Science Foundation.

Brut, sure brand deodorants under recall due to benzene