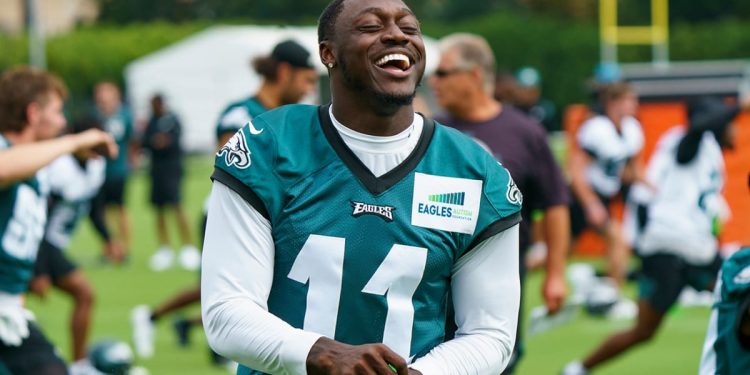 It’s been a great offseason for wide receivers so far and on Sunday night it got even better. NFL Network’s Ian Rapoport reported that the 49ers and star wide receiver Deebo Samuel came to an agreement on a three-year extension worth $73.5 million with $58.1 million guaranteed, adding to a long list of wideouts getting paid since March.

However, not all the star receivers who cashed in got to stay with their teams. Some, like AJ Brown, relocated when their teams traded. And what appears to be a direct shot at his former team, Brown took to Twitter to react to Samuel’s reported deal.

“Basically all 4 of us got the same contract and I’m the only one got traded… yeah keep believing it was me,” Brown said in the tweet. “Anywho Go Birds.”

The Titans traded Brown to the Eagles on draft night in exchange for two 2022 draft picks amid his contract dispute. He eventually signed a four-year extension with the Eagles worth $100 million, per Sports Illustrated’s Albert Breer. Brown, along with Davante Adams and Tyreek Hill, were the only three standout receivers who signed big extensions after getting traded.

In May, Brown released a statement saying Tennessee fans threatened him because of the trade to Philadelphia. There still appears to be some bad blood in that fresh wound.

Daily Cover: Will Jacob deGrom Get the Last Laugh?

Enter for your chance to get Sonic Origins for free!

Enter for your chance to get Sonic Origins for free!