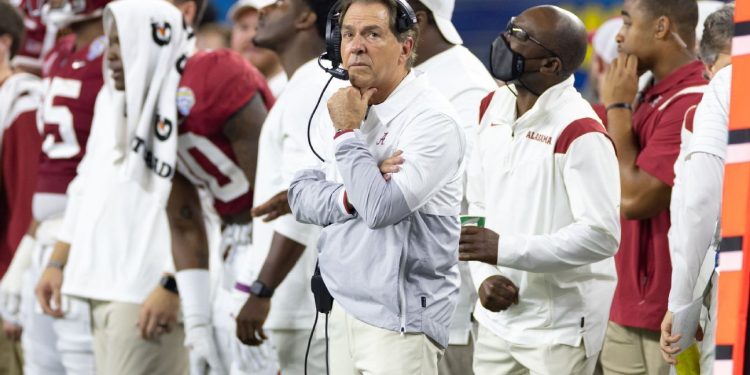 Alabama coach Nick Saban singled out Texas A&M for “buying” its top-ranked signing class and threw a spotlight on the unintended effect of name, image and likeness rights on recruiting during an event with local business leaders Wednesday night in Birmingham.

“I mean, we were second in recruiting last year,” Saban told the audience. “A&M was first. A&M bought every player on their team — made a deal for name, image, likeness. We didn’t buy one player, all right? But I don’t know if we’re gonna be able to sustain that in the future because more and more people are doing it. It’s tough.”

Saban said Alabama players made $3 million “doing it the right way” last year and that only 25 players were able to leverage NIL opportunities.

He isn’t the first coach to call out the Aggies by name. In February, Ole Miss coach Lane Kiffin quipped, “Texas A&M was going to incur a luxury tax in how much they paid for their signing class.”

That prompted a stern response from Texas A&M coach Jimbo Fisher, a former Saban assistant, during his signing day news conference the following day when he said that coaches spreading rumors about deals promised to recruits were “clown acts” and “irresponsible as hell.”

The problem with NIL, Saban said Wednesday, is “coaches trying to create an advantage for themselves.”

Saban said coaches know how much money is available from their school’s collective — a group of program supporters who pool their resources to offer deals to athletes — and “how much he can promise every player.”

“That’s not what it was supposed to be,” he said. “That’s what it’s become. And that’s the problem in college athletics right now. Now every player is saying, ‘Well, what am I going to get?'”

Saban said people blame the NCAA, “But in defense of the NCAA, we are where we are because of the litigation.”

Last summer, the Supreme Court upheld a lower court ruling that said limiting education-related benefits violated antitrust laws. In the wake of that decision, the NCAA adopted rules that were far less restrictive, including allowing athletes to profit from their name, image and likeness.

NCAA rules prohibit a school or its employees only from paying athletes directly for their NIL rights.

“If the NCAA doesn’t get some protection from litigation, whether we gotta get an antitrust or whatever it is, from a federal government standpoint, this is not going to change because they cannot enforce their rules,” Saban said. “Just like [Alabama basketball coach Nate Oats] said, we have a rule right now that says you cannot use name, image, likeness to entice a player to come to your school.

“Hell, read about it in the paper. I mean, Jackson State paid a guy $1 million last year that was a really good Division I player to come to the school. It was in the paper, and they bragged about it. Nobody did anything about it. I mean, these guys at Miami that are going to play basketball there for $400,000, it’s in the newspaper. The guy tells you how he’s doing it.”

The Jackson State player Saban was referring to is Travis Hunter, a five-star prospect who flipped his commitment from Florida State and signed with the HBCU program during the early signing period in December. Jackson State coach Deion Sanders denied the rumor that Hunter had been offered more than $1 million.

Sanders responded strongly to Saban’s comments Wednesday night, tweeting: “You best believe I will address that LIE Coach SABAN told tomorrow. I was & awakened by my son @ShedeurSanders that sent me the article stating that WE PAYED @TravisHunterJr a Million to play at @GoJSUTigersFB! We as a PEOPLE don’t have to pay our PEOPLE to play with our PEOPLE.”

Saban’s comments on Miami referred to former Kansas State men’s basketball player Nijel Pack, who transferred to the Hurricanes in April. Shortly after, it was announced that he signed a two-year, $400,000 NIL deal with Florida-based health tech company LifeWallet.

Saban said he has told players that they will all get the same opportunities from Alabama’s collective but made the distinction that, “You can go earn however much you want.”

“I tell the recruits the same thing: Our job is not to buy you to come to school here,” he said. “And I don’t know how you manage your locker room. And I don’t know if this is a sustainable model.”

Rental market is at its 'most competitive ever' reveals Rightmove

How to Select the Best Women Motocross Riding Gear for a Perfect Fit?