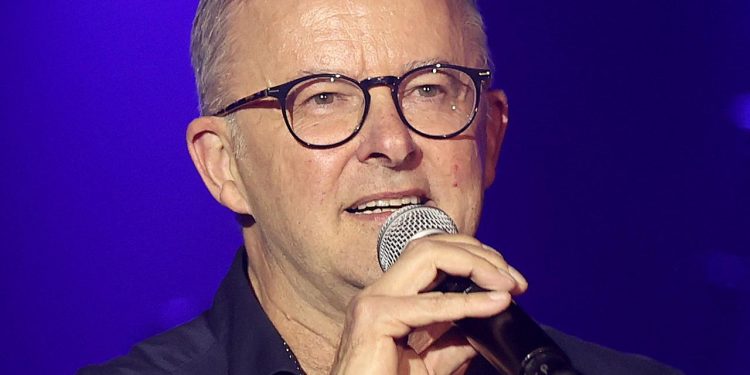 Anthony Albanese was greeted by deafening boos and jeers as he took to the stage at Bluesfest in Byron Bay on Sunday night.

Anthony Albanese was greeted by deafening boos and jeers as he took to the stage at Bluesfest in Byron Bay on Sunday night.

The Labor leader briefly faced the crowds ahead of a performance by rock icon Jimmy Barnes, but did not receive the rock star welcome he was no doubt hoping for.

Photos and video from the scene show a line of audience members giving Albo the thumbs down as he delivered his hasty speech.

Instead, countless festivalgoers booed the would-be PM at first, although there were loud cheers as he briefly mentioned issues including Indigenous recognition and supporting Double J.

A festival worker later said she had been expecting a warmer reception, but that some of the most vocal critics booing the Opposition leader at the front of the crowd had been anti-vaxxers, with many cheers of support coming from audience members standing further back.

It also probably didn’t help that the emcee brought up the upcoming federal election before introducing Mr Albanese, a topic unlikely to be popular with a boozed-up crowd itching to see Barnsey in the flesh.

Earlier in the night, the Labor leader — who by then had traded in his trademark blue suit for festival-appropriate jeans and boots — received a far warmer reception during a walk through of the crows ahead of a performance by The Waifs.

Accompanied by partner Jodie Haydon and senior frontbencher Tony Burke at the iconic music festival in Byron Bay, Mr Albanese was met with chants of “Albo, Albo” as he greeted the audience.

The music-loving would-be PM — whose “DJ Albo” alter ego has made countless headlines over the years — was clearly in his element, beaming as soon as he arrived at the festival after a bruising first week of campaigning.

His appearance at Bluesfest coincided with an announcement that Labor would be taking the “first steps” to expand the reach of Double J on radio.

Currently, audiences across regional Australia can get Double J on digital TV, the ABC website or the ABC listen app, but can’t get Double J on the radio because there’s no Double J on FM radio and most towns don’t have DAB+ radio.

The ALP has confirmed it will commission the ABC to undertake a feasibility study into the expansion of Double J on radio as the next logical next step in helping great Aussie artists reach more ears.

“It’s no secret I’ve always been a huge music fan,” Mr Albanese said of the announcement.

“I want more people in regional Australia to experience the joy I have of listening to Double J, singing along to songs they love or maybe discovering something new.”

The Labor leader’s appearance at the Byron Bay festival comes as a new poll reflects some voter disappointment in his first week of campaigning.

According to the Fairfax/Resolve poll voter support for the Labor opposition dropped from 38 to 34 per cent with a rise in the number of undecided voters.

It follows Newspoll suggesting primary support for the ALP has dropped from 41 per cent to 37 per cent in recent weeks. However, Labor retains a 53-47 lead on a two-party preferred basis according to Newspoll.