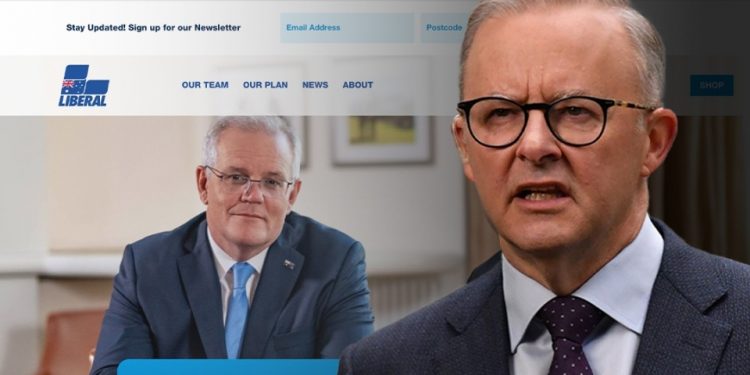 
Australia’s internet domain name regulator has pulled down Albanese.com.au after it was found to be redirecting visitors to the Liberal Party’s homepage.

The unexpected redirect was no accident.

Information provided by the regulator shows the Liberal National Party of Queensland registered Albanese.com.au in December, with Brisbane-based LNP adviser Sam Jackson, who did not respond to TND‘s request for comment, listed as the main contact.

“This is a test of integrity for Scott Morrison and for the Liberal Party,” he told reporters on Wednesday.

The Opposition Leader was nonetheless confident that voters won’t have been duped.

“As if someone who is searching for my website is going to go, ‘Oh, it is the same as the Liberal Party website’,” he said.

Political advertising has relatively few regulations, and enforcement can be an arduous process.

The current controversy prompted the AEC to clarify that electoral laws do not cover website domain names.

Instead, local websites fall under the remit of the .au Domain Administration, more commonly known as auDA.

For websites ending in .com.au, auDA policy states that the domain name must match the name, acronym, trademark, service or premises of the applicant’s organisation.

For Albanese.com.au, the LNP didn’t fulfil any of these criteria.

“Where registrants are found not to have met the requirements of the .au licensing rules, an .au domain name may be suspended or cancelled by auDA,” a spokesperson for the regulator told The New Daily on Wednesday afternoon.

“auDA has received complaints about the allocation of the domain name Albanese.com.au to the current licence holder. The domain name is currently suspended.”

These rules are enforced in order to “maintain trust and confidence” in Australian websites.

The LNP has since confirmed that it was behind the redirect.

“We’re glad to see the domain name has been promoted so heavily, which has helped to spread the message about the Morrison government’s achievements,” an LNP spokesperson told AAP.

“The domain name was acquired appropriately and it’s a matter for Mr Albanese to answer why he hadn’t registered this domain if he wanted to use it.”

It’s the latest example of political operatives registering websites named after their rivals.

In January 2021, the ownership of PaulineHanson.com.au lapsed and was snapped up by refugee advocates who redirected users to the Refugee Council of Australia website.

The controversy over the Albanese domain name also prompted former Senator Derryn Hinch to weigh in about a similar experience he had.

“And they have the gall to include ‘stop spam emails’ as one of their policies,” the Mr Hinch told TND.