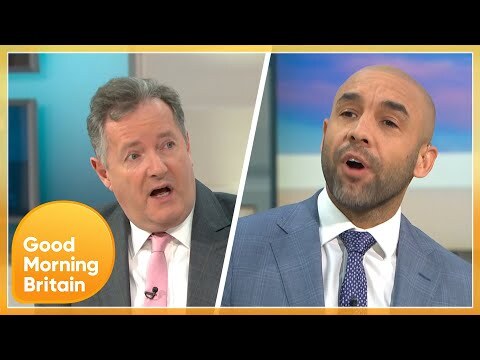 When Piers Morgan walked off the “Good Morning Britain” set Tuesday, prior to quitting the show, weather presenter Alex Beresford was left in his wake, calling Morgan’s behavior “pathetic” and “absolutely diabolical.”

Now Beresford has clarified his feelings about Morgan’s departure from “Good Morning Britain,” saying in a statement Thursday via Twitter that it wasn’t the conclusion he was hoping for, and that the two had to “agree to disagree” when it came to the royal family.

“Over the last few years, Piers and I have had a lively, cheeky on-air relationship. We both wanted to be on the show Tuesday morning, and from our very public conversations on Twitter, we both knew how strongly our opinions differed on the treatment of Harry and Meghan pre and post the interview that has split the world,” Beresford wrote.

The two differed in their interpretations of the Duchess of Sussex’s recent revelation to Oprah Winfrey that she had suicidal thoughts as a result of her treatment by the British media and what she described as a lack of support from the royal family. She also said a member of the family was concerned about how dark her son Archie’s skin might be, which Queen Elizabeth II later said was “concerning.”

Hailed as an ally, Beresford took Prince Harry and Meghan’s side, noting the extreme nature of the negative press about their relationship and attempting to hold Morgan accountable for his comments. Morgan, meanwhile, slammed the couple pointedly for trashing the royal family and said he didn’t believe a word that came out of Meghan’s mouth.

(“It was all happening just because I was breathing,” Meghan told Winfrey during the interview, breaking down in tears as she talked about the lack of support after she asked for help with her mental health. “I just didn’t want to be alive any more. That was a clear, real, frightening and constant thought.”)

On Tuesday’s show, Beresford brought up Morgan’s past friendly relationship with Meghan, which the former “America’s Got Talent” judge has said ended abruptly after she met Harry. Morgan got up and walked off the set, saying, “OK, I’m done with this. … Sorry, no, sorry. … See you later. Sorry, can’t do this.”

It was announced later in the day that Morgan had quit “Good Morning Britain.” Ofcom, the regulatory agency for broadcast communications in the U.K., said it had launched an investigation after receiving more than 41,000 complaints about his comments about Meghan and mental health on Monday, even before the interview aired in Britain.

“I hoped we could reach a place of understanding,” Beresford said Thursday. “It’s sad that we weren’t able to get there, but challenging his opinion was not an outrage. On this occasion, we have to agree to disagree.

Beresford also thanked Morgan for his support and occasional advice over the years, and wished him well.

As it turns out, the Tuesday episode of “Good Morning Britain” beat rival program “BBC Breakfast” in the ratings for the first time, Morgan tweeted Wednesday, adding, “My work is done.”

“I had one goal when I joined @GMB – beat @BBCBreakfast in the ratings,” the former “GMB” host said Thursday in another tweet. “On my last day, we did it. That was down to the hard work & dedication of the whole team. They don’t all agree with me, some don’t even like me, but we were a team .. and we won. Thanks guys. I’ll miss you.”

I had one goal when I joined @GMB – beat @BBCBreakfast in the ratings.
On my last day, we did it.
That was down to the hard work & dedication of the whole team.
They don’t all agree with me, some don’t even like me, but we were a team..and we won.
Thanks guys. I’ll miss you. pic.twitter.com/eOOmoZfmPT

Speaking to reporters in Britain on Wednesday, Morgan said his exit from “GMB” was a “temporary hibernation. “

“I believe in freedom of speech,” he said. “I believe in the right to be allowed to have an opinion. If people want to believe Meghan Markle, that’s entirely their right. If I have to fall on my sword for expressing an honestly held opinion about Meghan Markle and … that interview, so be it.”

CBS will rebroadcast “Oprah With Meghan and Harry” on Friday at 8 p.m. Pacific and Eastern.

Ukraine rules out ceasefire as fighting intensifies in Donbas – Reuters.com