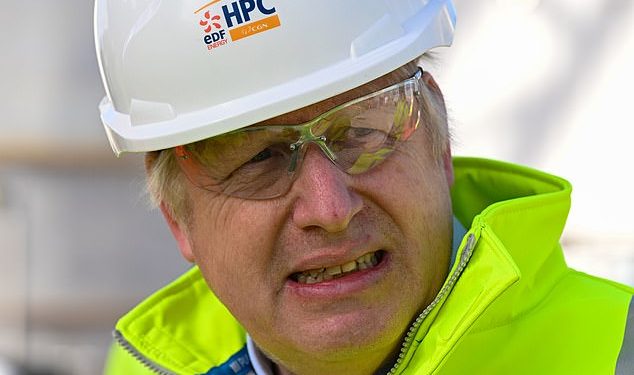 
ALEX BRUMMER: In emergencies governments must spend big – think of what £70bn spent on furlough could do for power generation and net zero

Emmanuel Macron’s hold on the French presidency is seriously under threat as far-Right candidate Marine Le Pen hammers away at the cost of living crisis.

Macron has spent much of the campaign portraying himself as the super-statesman in the Ukraine crisis, while Le Pen’s National Rally party (she has distanced herself from her father Jean-Marie Le Pen’s hateful views) focuses on pocket book issues.

The reality is that when it comes to the inflationary burst caused by the tripling of market prices for natural gas and above- $100-a-barrel oil, France is among the best inoculated of the Group of Seven nations. 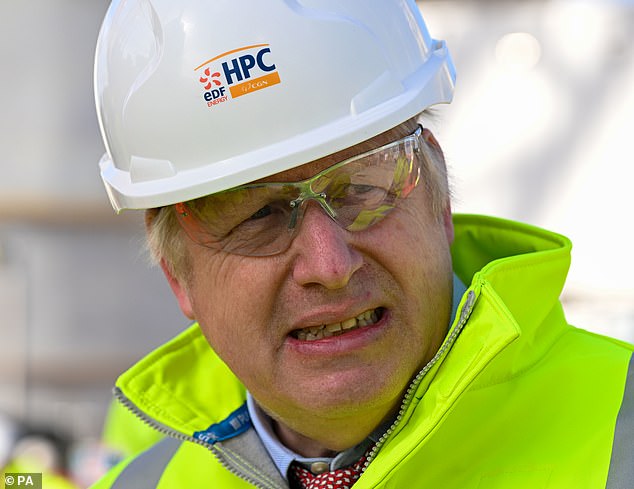 Looking ahead: Boris Johnson’s embrace of new nuclear will hopefully create some momentum around the atomic option

The warm embrace of nuclear power, which has required the occasional refinancing of Electricite de France (EDF), means that if all the atomic stations are up and running France is able to generate 70.6 per cent of its electricity from this source.

Another consequence is that French inflation, while on the rise at a projected 4.5 per cent in March, is around half that in the UK.

The case for more nuclear in the UK is irrevocable. As attractive as wind power is, and more aggressive targets for offshore generation must be a good thing, it is never going to be the ultimate solution to Britain’s energy needs. As we have learnt this year, climate change may cause the wind to blow more fiercely, but technology for capturing and storing electrical power using fuel cells is some way off.

Moreover, as the most recent motor sales data shows, the public’s new love affair with electric cars means that demand for electricity is likely to increase exponentially.

Boris Johnson’s embrace of new nuclear, as outlined in the energy security strategy, will hopefully create some momentum around the atomic option.

Indeed, the bigger the baseload the less dependent the UK will be on imported carbon-emitting energy sources.

And even though the new super-nuclear plant being built by EDF at Hinkley Point in Somerset is a triumph of engineering and reasonably on schedule, it will not, at best, be on line until 2026-27.

By then several of Britain’s older plants will no longer be serviceable.

At present nuclear is not a short-term answer to anything.

The biggest obstacle is finance, and successive governments, reaching back to Tony Blair’s, have struggled to bring in private sector funding.

Hinkley is only possible because EDF and Chinese investors have backed the project and George Osborne offered a strike price for eventual output, which at the time – but no longer – looked incredibly generous.

Johnson has put £100m behind the clock at £20billion Sizewell C, and following the decision to wave goodbye to China may yet have to put in far more.

The objective is to attract private sector investors beyond EDF by using what is known as a Regulated Asset Model. This essentially provides investors with a dividend income while the plant is being built.

The Prime Minister is also super-enthusiastic for the Rolls-Royce small modular reactors based on tech currently used to power submarines.

But there are formidable obstacles. Planning permission is a nightmare, even if existing nuclear sites, such as Hartlepool, are adapted. And there is little public discussion of waste storage and decommissioning costs.

What is needed is a similar focus to that applied by the Americans at Los Alamos in the Second World War and to learn a lesson of Covid.

In emergencies governments must be prepared to spend big. Think of what the £70billion spent on furlough could do for power generation and the net zero targets.

There is no greater advocate of the High Street or shopping centre in Britain, Europe or the US than George Weston, the chief executive of ABF, which owns fast-fashion giant Primark.

Its retail model works because it doesn’t have to worry about the complex logistics and delivery cost of online.

Primark is finally recognising that it needs a digital shop window to the world and the retailer’s new website seeks to provide easy access for customers to information about what is available at what price, in what size and with what level of sustainability.

New post-Covid habits have become hard wired, and when I visited the new site the immediate reaction was to wonder where the ‘add to basket’ function was buried.

How long before Primark asks itself the same question?