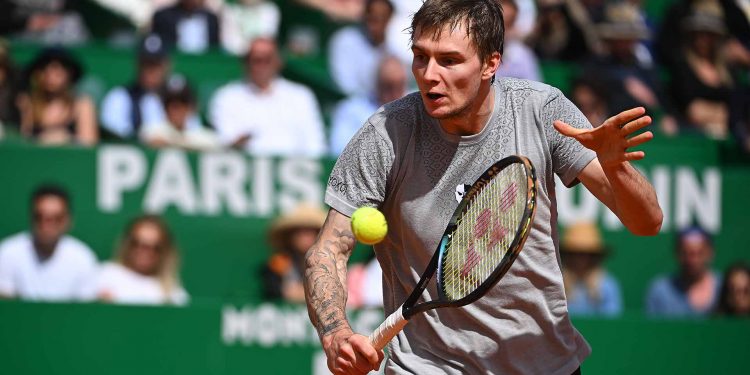 
Alexander Bublik ensured it would not be a winning return for Stan Wawrinka Monday at the Rolex Monte-Carlo Masters, downing the 2014 champion 3-6, 7-5, 6-2 to reach the second round.

Former World No. 3 Wawrinka was competing in his first tour-level match in 13 months and he showed little sign of rustiness for large periods as he crushed forehands and hit his trademark backhand with great depth and topspin.

However, the 37-year-old was unable to maintain his best level as the match wore on, with World No. 36 Bublik causing Wawrinka problems with his powerful serve and variety of shots as he pulled the wild card around the court to claim his first win at the event in two hours and five minutes.

With his victory on Court Rainier III, Bublik now leads Wawrinka 1-0 in their ATP Head2Head series and will next face 13th seed Pablo Carreno Busta or Argentine qualifier Sebastian Baez in the second round.

Wawrinka has lifted 16 tour-level trophies in his career, including the title in Monte-Carlo in 2014 when he defeated Roger Federer in the final. However, he missed the majority of last season due to injury, with his previous tour-level match prior to Monday coming against Lloyd Harris in Doha in March 2021.

The Swiss star, who admitted in his pre-tournament press conference that his road back to action has been ‘very long and difficult’, will take courage from his performance against Bublik, with the Montpellier titlist having to find his best level to see off Wawrinka.

In an entertaining clash, Wawrinka flew out of the blocks as he hit with controlled aggression to pin Bublik back and clinch the first set. After saving break points on serve at 1-2 and 2-3 in the second set, the 24-year-old started to grow in the match as he looked to move inside the baseline and finish points at the net.

Wawrinka fended off three set points on serve at 4-5, but couldn’t keep Bublik at bay for long, with the Kazakh levelling on his fourth set point. From there, it was one-way traffic as Bublik soared away in the third set as Wawrinka started to tire.

Argentine Diego Schwartzman showed his fighting spirit as he battled past Karen Khachanov 6-7(5), 6-3, 6-3 to improve to 10-3 on the season on clay.

The 12th seed, who advanced into the quarter-finals in Monte-Carlo in 2017, reached finals in Buenos Aires and Rio de Janeiro in February. The 29-year-old will face Hungarian Marton Fucsovics in the second round.

Meanwhile, Australian Alex de Minaur eliminated Spanish qualifier Bernabe Zapata Miralles 6-3, 6-4 in 83 minutes. World No. 25 De Minaur is making his second appearance at the clay-court event, having fallen in the first round in 2021.