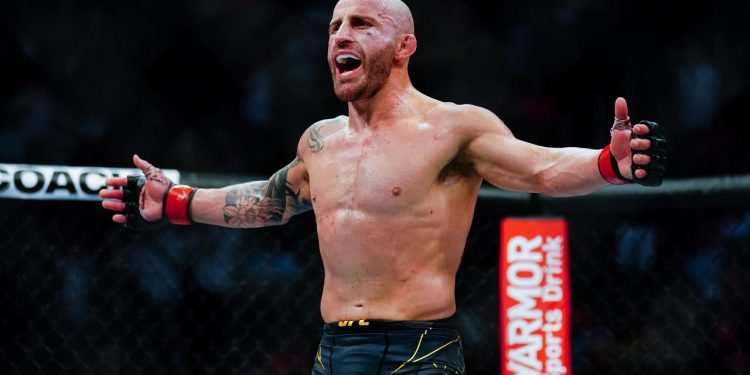 
They say it doesn’t hurt to be nice.

But sometimes it does.

And that’s a lesson Australian Alexander Volkanovski, the UFC’s featherweight champion, has had to learn.

After ten straight wins in the UFC, Volkanovski went from a former concreter out of Windang to a name and face known all around the world.

To make it to the top, Volkanovski worked on his craft so he’d be ready for every new test.

But there was no session or class on what to do when fame and fortune came along.

There was nothing on what to do when a faceless account on Twitter spews hate, or when the requests and favours start piling up back at home.

Strutting around Jacksonville, though, Volkanovski cuts a different figure ahead of UFC 273; one that’s not afraid to put himself first, and a fighter and man finally content to let the hate go.

“I’m still learning so much about myself and understanding this whole thing,” Volkanovski told foxsports.com.au.

‘All a load of s***’: Volkanovski’s brutal reality check for UFC rival after snub

“Remember, I’m just a regular bloke that didn’t know much, from a small town. I don’t get a lot of the stuff that comes with being a UFC champion.

“Hate was one of them. I didn’t get it, and I’ve always been a people pleaser.”

A lot of that ‘hate’ came from the expected places, like social media, and Volkanovski has had to learn to just ignore it.

But it’s been in the real world where Volkanovski has really had to grapple with his new reality.

“I’d put myself in a worse position to make other people happy,” Volkanovski said. “It’s just how I am, being that people pleaser.

“But it’s just something I’ve definitely overcome. And I don’t sit there and do my head in over the littlest things.”

Kiwi UFC champion Israel Adesanya is someone Volkanovski knows well, having worked with him for years at City Kickboxing in Auckland.

Adesanya likes to say, ‘new levels, new devils’, and that’s essentially summed up the experience Volkanovski has had since taking the belt from Max Holloway.

“Everyone wants to work with you,” Volkanovski said.

“Everyone wants a piece of you. It would come down to single text messages, and worrying what people were going to think: ‘are they going to take this the wrong way?’

“Why am I losing hair over them maybe taking it the wrong way, when I clearly don’t mean it like that. So, I’m always just so worried about what people think. Even haters.”

Volkanovski is days away from defending his 145-pound world title for the third time, this time against Chan Sung Jung, also known as ‘The Korean Zombie’.

For Volkanovski, zombies are nothing compared to the fear of letting down those around him.

“Everyone who knows me tells me ‘you’re too nice’. Well, it’s true man,” Volkanovski said.

“I’m always going to be nice and friendly; it doesn’t mean I’m a pr*ck now. I’ll never be that guy. But I’m not going to be walked over.

“I don’t want my family missing out because I’m trying to make other people happy. I would do more for people who are just using me, and that don’t really care about me, because I knew my family would understand.”

But that’s all over. Like it or not, Volkanovski is doing his thing.

“They’re going to hate you anyway,” he said.

“Why do you care so much about that? Why are you trying to please them and prove them wrong? Why?