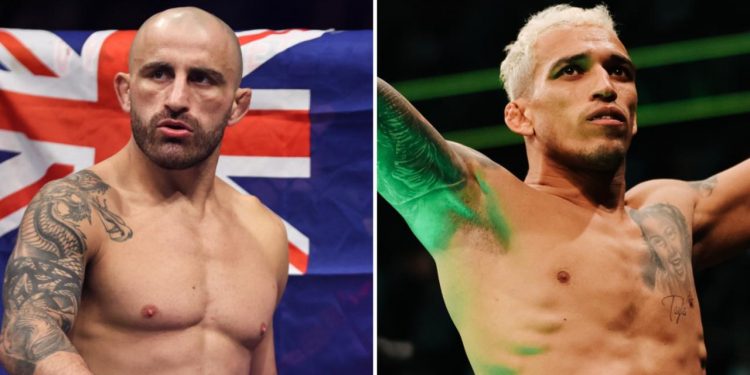 
If Australian MMA fans thought upcoming UFC 274 was already a massive occasion, the highly-anticipated pay-per-view could take on a whole new complexion based on the events of the past 48 hours.

Australia’s featherweight champion Alexander Volkanovski is fed up with his division, and he doesn’t care who knows about it.

After defending his belt for a third time on Sunday (Australian time) against “The Korean Zombie” Chan Sung Jung at UFC 273 in Florida, extending his nine-year winning streak to 21 fights, Volkanovski intimated a move up a division might be his next option given the lack of competition coming from the featherweights.

And by default, Volkanovski’s public flirtation with the lightweight division has attached potentially massive implications to the UFC 274 main event between lightweight champion Charles Oliveira and No.1 contender Justin Gaethje on May 8.

“I’m in the position where I could do a couple of things. If this division isn’t going to sort itself out and they’re going to sit back and just f***ing sit back and wait for s***, then fine I’ll move up and fight at lightweight,” Volkanovski said after his most recent victory.

“I’m an easy champ to understand. Take that No.1 spot, you get that shot. If not, let’s move up. I think we’re in a good position to move up and see what happens in this lightweight title fight and maybe move up because again, I’ve shown I’m levels above in this division.”

And with those comments, Volkanovski might just have talked his way into being the next man in line for a shot at the lightweight title against either the incumbent Oliveira or the challenger Gaethje, jumping the queue ahead of the likes of Michael Chandler, Tony Ferguson, Islam Makhachev, Beneil Dariush and Dustin Poirier, Oliveira’s most recent opponent.

‘PISSES ME OFF’: Aussie Volk reveals savage side in brutal warning to UFC rivals

‘BLEW THAT ONE’: Dana rips UFC judges in ‘closest title fight in history’

That hypothetical scenario would see Volkanovski make an audacious bid for double-champion status, joining Conor McGregor, Daniel Cormier, Amanda Nunes and Henry Cejudo as an exclusive group of UFC fighters to have achieved that rare feat.

McGregor is currently listed in the lightweight rankings, but given the Irish legend‘s considerable muscle gain in recent times, a welterweight return for him would seem most likely once he fully recovers from his broken leg.

The allure of becoming a double-champion would no doubt be incredibly tempting for Volkanovski, who would cement his legacy as one of the sport’s greatest ever athletes if he were to claim a second belt simultaneously.

And the Wollongong native didn’t envisage too many issues for himself if he were to make the jump up in weight class.

“Look what I’m doing to some of these guys, I’ve fought at all of these different weights, we talk about pound-for-pound, I mean it’s there, I’ve shown you what I can do. I’m owning that crown so from now on ‘Volk’ is coming for everyone. Lightweight division watch out.”

Volkanovski is a perfect 4-0 at lightweight, but hasn‘t fought in that division since November 2016, when he defeated Yusuke Kasuya at Rod Laver Arena.

Ironically, as recently as January, Oliveira mooted a move down to 145 pounds to fight Volkanovski for the featherweight title and become a double champ himself, so there is definitely a desire from both camps to meet in the octagon, it just depends in which weight division.

But a fight with Oliveira, who is enjoying a 10-fight win streak dating back to 2018, would be no walk in the park for Volkanovski.

Not only does the Brazilian hold the UFC all-time record for finishes (18) but he also has the most submission wins (15) by some margin with the next best Demian Maia on 11.

Oliveira also shares the record for most fight night bonuses with Donald Cerrone (18), and is one of just 10 fighters to have achieved at least 20 wins in the promotion‘s history.

The Brazilian Jiu-Jitsu black belt is a submission artist who is a phenomenal wrestler and possesses very good cardio, which has yet to be put the ultimate test with none of his 41 fights going past the third round.

Volkanovski would provide a stern test because he has hardly ever been threatened on the mat, and even when he found himself in a couple of choke holds against Brian Ortega last year, he displayed almost superhuman powers to not only escape Ortega‘s clutches, but seem relatively unaffected by the submission attempts.

The Australian also has an elite gas tank and is well accustomed to championship fights, with his last four matches all going past the third round and three of them going the full 25 minutes. That experience would undoubtedly come in handy if he dragged Oliveira into the deep waters of his first ever four/five-round fight.

Oliveira has a considerable reach of 74 inches, which shades Volkanovski by three inches (71), and in recent times has begun exploiting that by displaying considerable knockout power. Three of his last six wins have come via TKO/KO as a result of punches, further enhancing his status as an all-round fighter.

Volkanovski is a clever striker, though, who also has a black belt in Brazilian Jiu-Jitsu, and is brilliant in the clinch himself, doing his best work in this regard up against the cage, while his vicious leg kicks have the potential to render his opponent impotent quickly.

Oliveira has been known to have a poor striking defence in the past, so that would be an area that could work to Volkanovski’s advantage if this fight ever went ahead.

A showdown between the pair would also have implications for the pound-for-pound rankings.

While welterweight king Kamaru Usman doesn‘t look like being unseated from atop those rankings anytime soon, Volkanovski (third) and Oliveira (fifth) are both in the top five, along with middleweight champion Israel Adesanya (second) and heavyweight strap holder Francis Ngannou (fourth).

Unfortunately, at the moment, this hypothetical fight remains in the realm of fantasy. But for now, until it comes to fruition, it sure is fun to talk about.