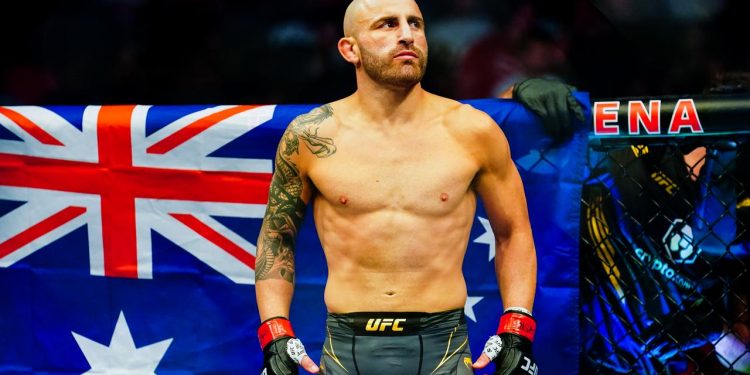 
Sometimes you can look at a great champion, in any sport, and figure out pretty quickly what makes them so great.

Michael Phelps is basically more fish than man. LeBron James is 6’9”, 37 years old, and still jumping out of gyms. And in the UFC, heavyweight champion Francis Ngannou looks as though he has been carved from rock. A really big rock.

It’s what makes Alexander Volkanovski’s win streak in mixed martial arts, and in the UFC particularly, so impressive. And in some ways, so confusing.

On the surface, it’s hard to figure out how a guy who stands at 5’6”, with no obvious special physical traits (other than some weirdly long arms), has won ten straight fights on his way to the belt in an organisation filled with the deadliest men on earth.

When Volkanovski’s game is discussed by the experts, fight IQ comes up a lot. His composure, stamina and all-round game are all things you hear too.

But that doesn’t quite satisfy.

How is it that this former concreter out of Windang has risen to championship status in the featherweight division, beating Jose Aldo and Max Holloway (twice) in the process?

UFC 273 Ultimate Guide: Everything you need to know ahead of Volkanovski vs The Korean Zombie

“He just has this insane gas tank, and he feels like he’s 300 pounds when he gets on top of you,” UFC lightweight, training partner, and coach Brad Riddell told foxsports.com.au.

It wasn’t that long ago that ‘Footy Volk’ was tearing it up; weighing a ton and mixing it with the big boys. And Riddell, short of any other reason, believes that could be the secret.

“He’s extremely strong,” Riddell says. “And I reckon it’s from coming down from 100kg gradually. He managed to maintain the strength.

“And I assume having that much weight on that small a body, made his lungs work a lot harder when he was bigger, and then managed to keep it when he was lighter.

For head coach Joe Lopez, it’s Volkanovski’s ability to “put it all together” that separates him from the pack.

“Not only physically, but mentally.”

There is no settling for Volkanovski.

“When you work as hard as he does, and you go out about life like he does … when you get in those positions, you’re ready for it,” Hickman says.

All three bring up the 33-year-old champion’s work ethic and insatiable appetite to keep getting better and learn from those around him.

It’s an approach and attitude that works to explain Volkanovski’s success to date, and one that certainly makes it sound like there’s more to come.

“He will sit at the table with the greats,” Hickman says of what he expects Volkanovski’s legacy to be when it’s all said and done.

“When you have the conversation of the who’s who in this sport, whether it’s the pioneers, the previous generation, or this generation, when you mention his name, he’ll definitely have a seat at the table.”

If you ask Volkanovski the ‘superpower’ question, he puts it simply: “The drive to do what I have to do, to be better.”

“It’s that mentality,” he says. “There’s a reason why I’m so well-rounded in all these things. There’s something that made me go looking for this.

But they don’t. And it’s Volkanovski who has beaten the world to stand alone atop the division.

That journey continues against Chan Sung Jung on Sunday (AEST) at UFC 273 in Jacksonville.