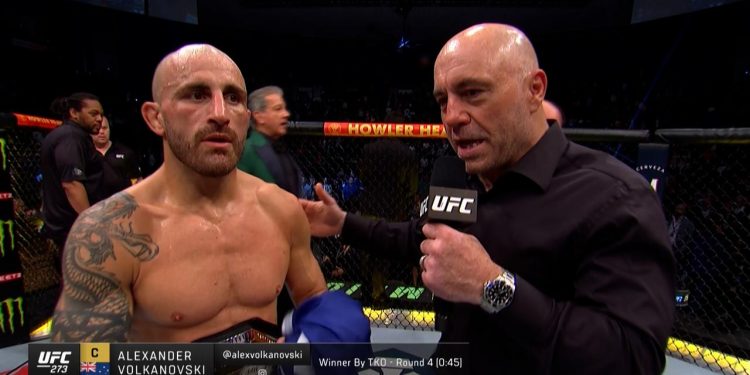 
Alexander Volkanovski took The Korean Zombie to war on Sunday [AEST] in a mauling but Jung Chan-sung has that nickname for a reason.

And so, as the Australian UFC featherweight champion continued his onslaught into the fourth round, he admitted to even “feeling bad” at one point.

“He actually took a lot more than I wanted him to,” Volkanovski said post-fight.

“I thought they could have stopped it a bit earlier. I started feeling bad but that is the sport we are in.”

The Korean Zombie was in such a poor state at the end of the third round that, heading into the fourth, Volkanovski asked: “You sure?”, questioning if he truly wanted to go again.

“I don’t know if he should go out for a fourth,” Paul Felder said in commentary.

“I was going to agree with you,” Joe Rogan replied.

“I knew that was what you were going to say. He might be done. It’s hard to say. He’s not even sitting on the stool. There is a really good argument to stop this fight right now.”

Rogan went on to described Jung “as durable as they come”, adding: “that is literally his nickname — The Korean Zombie — because of how durable he is”.

But it was becoming too much.

“He’s to tough for his own good. This is a warrior. I never want to count a fighter like Korean Zombie out, because he always has a chance, but when you start weighing your options.”

‘YOU SURE’: Volk’s moment of mercy as ‘picture-perfect’ Aussie dominates

Jung though was keen to keep on going, that was until the fourth when referee Herb Dean had to step in, potentially a round too late according to UFC boss Dana White.

“No need for him to take anymore punishment. He’s better than he’s ever been and he’s already the best. Thank God for Herb Dean.”

“The way he was looking at the fight, he was questioning it in the corner and brought the doctors in for a reason. But this dude [Volkanovski] is the greatest featherweight.

“Just because a fighter is throwing back doesn’t mean the fight shouldn’t be stopped. I’m a humungous Korean Zombie fan, no disrespect to him, but they looked like there were on different levels tonight.”

The overwhelming sentiment from the UFC world was that Dean should be applauded for ending the fight when he did, not letting The Zombie sustain anymore damage.

“Good call from Herb Dean. Korean Zombie is too tough for his own good,” UFC heavyweight champion Francis Ngannou tweeted.