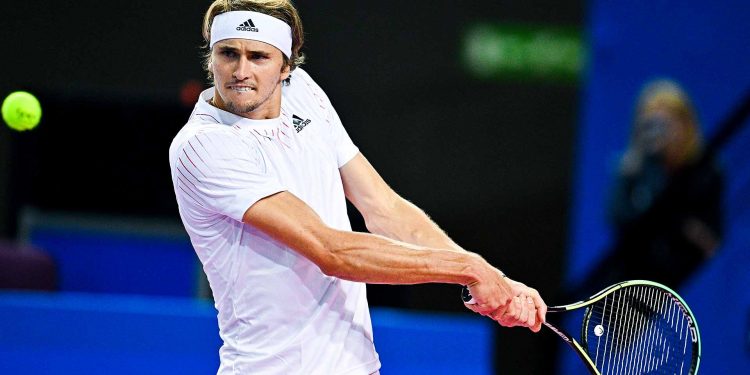 
Alexander Zverev moved to within one win of capturing his 20th tour-level title on Saturday, dispatching Swede Mikael Ymer 6-1, 6-3 at the Open Sud de France.

The top seed has been in ruthless form in Montpellier this week, dropping just 13 games en route to the final at the ATP 250 event. In a dominant performance against Ymer, the German fired six aces and dictated with his deep, heavy-hitting groundstrokes to triumph after 53 minutes.

“I am in the final and I am happy about that,” Zverev said in his on-court interview. “I played a pretty good match, I think I played one bad game in the whole match. Overall I am happy to be in another final, playing against Alex who I have known since I was 12 years old, so hopefully it will be a fun match.”

Zverev lifted the trophy in Montpellier in his last appearance at the tournament in 2017 and is now 10-1 at the indoor-hard event. The World No. 3 is aiming to win his first trophy of the season, following his disappointing fourth-round loss at the Australian Open last month.

With his victory, the 24-year-old has extended his perfect ATP Head2Head record against Ymer to 3-0. Zverev will meet Alexander Bublik in his 29th tour-level championship match.

Ymer was targeting his second ATP Tour final, having advanced to the championship match in Winston-Salem (l. to Ivashka) last season. Ymer’s older brother Elias Ymer also reached the last four at an ATP 250 event this week, enjoying a dream run from qualifying at the Tata Open Maharashtra in Pune.

Bublik will get another shot at winning his maiden tour-level title after he downed Filip Krajinovic 6-4, 6-2 to reach the final in Montpellier.

The sixth seed upset World No. 19 Roberto Bautista Agut in the quarter-finals and backed up this win against Krajinvoic with a strong serving display to advance after 64 minutes. Bublik fired 13 aces and won 94 per cent (29/31) of his first-serve points in their first ATP Head2Head meeting.

Bublik was competing in his eighth ATP Tour semi-final and is aiming to build on his strong 2021 season this year. In a standout 2021 campaign, the 24-year-old earned a personal-best 35 wins, advancing to finals in Antalya and Singapore.

The World No. 35 is making his second appearance in Montpellier and will rise to a career-high in the ATP Rankings on Monday following his run to the final at the ATP 250 tournament. Bublik is now 5-2 on the season.

Krajinovic was competing in his second semi-final in Montpellier, having advanced to the last four in 2020. The fifth-seeded Serbian was also seeking his first tour-level trophy this week.

Repayments to be penalty-free for equity release plans

Repayments to be penalty-free for equity release plans