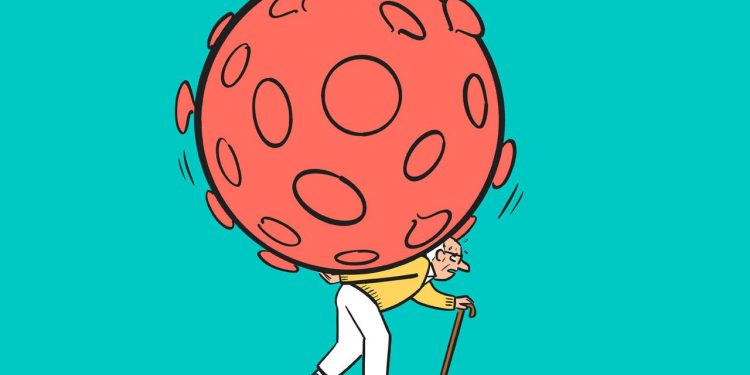 Over two years into a global pandemic that’s killed more than 6 million people, infected over 500 million others and irrevocably changed the way we all live, work and interact, while some mourn and some continue to constantly readapt, for others, an investigation continues.

How did we get here? What mistakes were made? And what can we learn? For those who survived another global health crisis decades prior, one with a far higher mortality rate but drastically lower visibility, many of these questions still remain. In the summer of 1981, a quietly alarming new illness started to afflict gay men, initially reported in localised gay media but soon covered in the New York Times with the still rather unforgettably chilling headline “Rare Cancer Seen in 41 Homosexuals”. In that year 234 people in the US died. In 1982, the CDC used the term Aids for the first time. By the end of the decade, over 100,000 Americans had died.

“I think fear was the overwhelming feeling,” journalist Leon Neyfakh said to the Guardian, having interviewed many who survived the era for the most recent season of his Fiasco podcast. “Just knowing that you might have it but you don’t know for sure and you might not know for months or years because for a long time there was no way to check while at the same time, all your friends were dying.”

While there are many, still-to-be-unpacked problems with how the US and many other countries mishandled and continue to mishandle Covid-19, there has been at least some sense that it was being handled. But under Ronald Reagan’s administration, at a time when the majority of US states still upheld sodomy laws, dealing with a condition that mostly affected gay men, and then eventually needle-sharing drug users, was not seen as a priority. “Any time you’re talking about sex or drugs, it’s a moral issue, not a public health issue,” says Bill Clinton’s former surgeon general Joycelyn Elders on the podcast.

Years later, Elders was one of many still sounding the alarm (before being abruptly and cruelly fired after insisting on more open and honest forms of sex education) but back then, it was left up to gay men, and then their devoted allies, to militarise, searching for the solutions that no one else was. They’re the heroes of the fifth season of Audible’s Fiasco, a dense and often devastating podcast docuseries devoted to clarifying the day-to-day realities of a particular historical event. Previous seasons have explored the Bush-Gore election of 2000 and the battle to desegregate Boston schools.

“I don’t think we’ve ever made a season of our show that had a message with a capital M,” Neyfakh said over Zoom, eager not to position the show as a form of public service. “We’re always much more inclined to air out the complexities of these issues and let people present their point of view and explain where they’re coming from and let listeners take away what they will. We’re always trying to find the human beings who populated these stories and we want to defamiliarise them from the abstractions in which they generally come to us.”

At the beginning, and for far too long after, a diagnosis was essentially a death sentence (it took until 1985 for an official test to even be available), and with little to no awareness of what it was and the specifics of how it was transmitted, gay men were forced into action even as their friends were disappearing around them. Neyfakh called it “a dichotomy of dread and mourning but paired with an irrepressible drive to survive and find a way out” and it’s something we see in both those that he speaks with and those who are no longer here with us but whose stories are shared. There was Michael Callen, a New York singer turned activist who worked alongside self-proclaimed “S&M hustler” Richard Berkowitz, to spread awareness among the dangerously uninformed gay community. Callen was diagnosed in 1982 at the age of 27 but alongside Berkowitz and with the directive help of doctor turned HIV/Aids researcher Joseph Sonnabend, spent the next decade, before his death at the age of 38, working on hugely important, and at the time unprecedented, pieces of work such as the foundational manual How to Have Sex in an Epidemic.

But what Fiasco details is that trying to police the sex lives of gay men was an uphill battle and for understandable, often too easily simplified or harshly judged, reasons. “One thing I didn’t appreciate until we started working on this was the fact that this period followed an explosion of gay life,” Neyfakh said. “In New York and San Francisco and LA, gay liberation was in full swing when this began and there was a lot of resistance when Berkowitz and Callen started advocating for safe sex because it felt like turning the clock back, it wasn’t just about being told you had to stop your party, it felt for many that it was like being told that people had to conform to mainstream society in a way that was anathema to gay liberation.”

One of the most interesting, and difficult, episodes zeroes in on the war over bathhouses in San Francisco. Once seen as a liberating space where gay men could express their sexual freedom, the rise of HIV quickly turned them into a potentially dangerous source of infection. While some, including many gay men, wanted them shut down, others insisted they remain open, viewing their closure as a dangerous step on the road toward recriminalising sodomy nationwide. For Neyfakh, “this debate of freedom v public health obviously resonated” in the era of Covid and it also shone light on the complicated fissures that cracked open within the gay community. “There was just a total vacuum of knowledge and so it’s unsurprising that people had what turned out to be incorrect theories,” he said.

For many, the broad strokes of what the Reagan administration did and most notably didn’t do will not be particularly revelatory but the quite literally lethal apathy from the first couple and those who worked alongside them remains shocking. Horrifying, recently unearthed audio footage is played from the very first time a journalist asked Reagan’s press secretary about the virus and is met with a quip before a dissolve into laughter. It took four years and the death of actor Rock Hudson to jolt them awake with Reagan finally saying Aids for the first time in late 1985. At the same time, the far right were using the moment to continue pushing a homophobic agenda, led by the televangelist Jerry Falwell’s Moral Majority, using words like “punishment” and “sin” to further isolate an already isolated community.

“I think I didn’t quite appreciate until I started working on the series how perfectly Aids fit into the pre-existing prejudices that people had against gays and lesbians,” Neyfakh said. “It just triggered every specific hateful prejudice that people had about these people who were seen as so separate from the mainstream world.”

What might be more revelatory to some is an episode that delves into the so-called “hemophilia holocaust” that saw the blood industry’s failure to take action result in 10,000 hemophiliacs infected through transfusions, more than half of their entire population in the US. “I think what shocked me maybe even more than the mere fact of the numbers was just how powerful the inertia was on the blood industry,” Neyfakh said. “Not changing practices and refusing to accept that their product, whether it was blood that was donated or plasma that was paid for, was suddenly essentially deadly and there were people trying to warn them and people trying to make proposals for how the product could be made safer. It felt like a story about more than just hemophilia or blood donation, it felt like a story about how institutions and industries close ranks and are resistant to change even in the face of emergency.”

While great strides have been made, especially with regards to the life-saving “triple cocktail” of antiretroviral meds (which took until 1996 to be created), what’s most striking about the eight-episode season, is just how little so much has changed. In 2020, about 680,000 people died from Aids-related illnesses worldwide. There’s still no vaccine for HIV. Needle exchange programs remain effective but vilified. Sexual health and sex education are both still treated like moral issues. Communities of colour are still overwhelmingly more at risk. Anti-LGBTQ+ legislation is on the rise. If something like HIV were to strike again, would things be any different?

“I think there’s just little reason to be optimistic,” Neyfakh said. “How easy it is for people, if it’s not in front of them, to just not think about it. I think that, paired with the homophobia it triggered, explains a lot of why there was so little public urgency around this disease and I think that would occur now, if you can put something out of sight, it’s very easy to not care.”