Amazon workers in Staten Island pull ahead in union vote 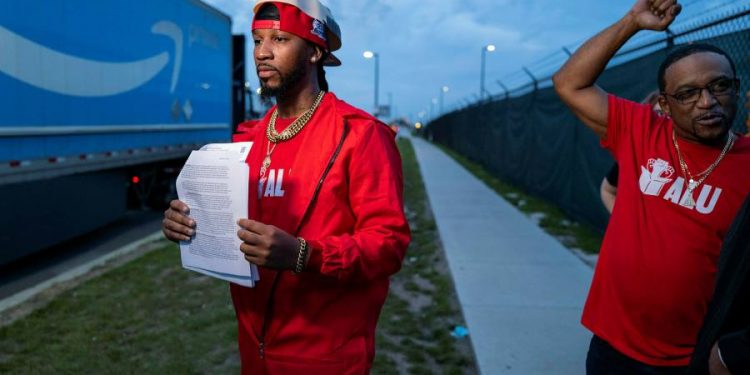 
A grassroots campaign to create the first-ever union at an Amazon facility in the US has taken a significant lead in voting, teeing up the possibility of a historic win for organised labour at the ecommerce giant.

The Amazon Labor Union was ahead by 1,518 votes to 1,154 at the end of counting on Thursday. Workers at the warehouse, known as JFK8, in the New York borough of Staten Island, had voted in-person over a five-day period ending on Wednesday.

Officials from the National Labor Relations Board (NLRB) did not share details of total turnout at the facility. The process will resume and probably conclude on Friday, officials said.

Separately, a rerun of an Amazon union vote at the BHM1 facility in Bessemer, Alabama, saw the organised labour effort look set for defeat. The “No” vote had a lead of 993 to 875 at the conclusion of the count.

However, unlike the in-person Staten Island vote, the Bessemer contest was conducted by postal ballot. There are 416 challenged ballots that have yet to be scrutinised, which could sway the result. A hearing to begin this process will be held in the coming weeks, the NLRB said.

The race was considerably tighter than the first vote by BHM1 workers, in April last year, when Amazon won a decisive victory by 1,798 votes to 738. Labour officials ordered a rerun because of what was deemed to be improper interference in the campaign by Amazon.

“We believe that every valid vote must be counted, and every objection heard. Workers here deserve that,” Stuart Appelbaum, president of the Retail, Wholesale and Department Store Union, said on Thursday.

In both elections, the union requires a simple majority of the return vote in order to begin organising.

Amazon did not offer any comment on the voting on Thursday. It has previously said that it felt unions were unnecessary, and that its employees enjoyed industry-leading pay and benefits.

Amazon, now America’s second-largest private employer after Walmart, has so far managed to fend off every attempt by its workers in its home country to unionise during its 28-year history.

Workers’ rights advocates regard Amazon as a prime target for organising efforts, at a time when support for unions among Americans is growing, according to studies conducted by Pew.

Rapid headcount growth at Amazon during the pandemic — it now employs more than 1.6mn people worldwide — has seen its practices come under intense scrutiny, particularly with regards to pace of work and other conditions.

Union supporters are calling for higher wages, more support for injured workers and an end to what organisers see as opaque systems for monitoring productivity.

The ALU, which is not backed by any larger union groups, sprang up in the wake of unrest around Amazon’s treatment of workers during the early days of the coronavirus pandemic.

Chris Smalls, ALU president, was dismissed by the company in March 2020 for what Amazon said was “violating social distancing guidelines and putting the safety of others at risk”.

According to a memo obtained by Vice News, David Zapolsky, Amazon general counsel, wrote that Smalls was “not smart or articulate” and could be made “the face of the entire union/organising movement”.

Smalls’ dismissal was cited by Tim Bray, a former senior software engineer at the company, when he resigned in protest at the company’s treatment of whistleblowers during the early days of the Covid-19 crisis.

“History, and the law, are passing judgment on Amazon’s behaviour in 2020,” Bray said on Thursday. “I am optimistic that we’re entering an era where big business in general and big tech in particular have to recognise the agency and humanity of the hundreds of thousands of people in their employ.”

Another facility, LDJ5, also in Staten Island, is due to hold its own vote to organise under the ALU on April 25.