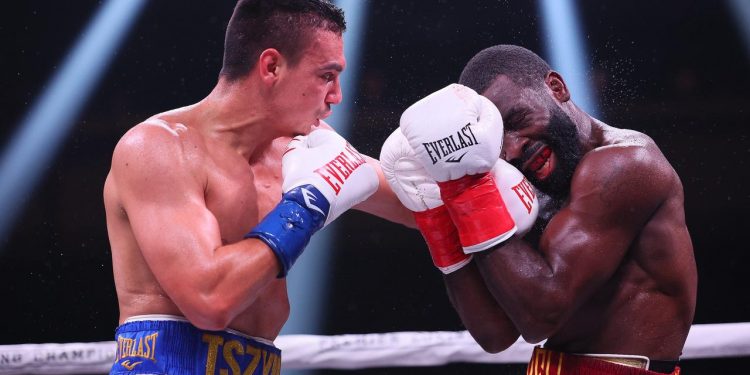 
Tim Tszyu has already won over Australia and now the rest of the world is starting to see just how good he is.

The Aussie boxing star proved he isn’t just a local hero as he dominated Terrell Gausha despite getting knocked down in the first round of his US debut in Minneapolis on Sunday (AEST).

Fighting in the 8400 capacity Minneapolis Armory, a packed house caught America’s first glimpse of the son of boxing legend Kostya, who himself won over the American market.

Although some US fans still have questions about Tszyu’s credentials after failing to get the knockout and appear to believe the Aussie is simply riding on his father’s coat-tails, the 27-year-old proved to good judges he is the real deal.

Short of a massive knockout statement, it was as good a US debut as Tszyu could have hoped for.

Hall of Fame Boxing analyst for Showtime, Al Bernstein, was a convert of the Aussie stud.

“@Tim_Tszyu is going to be a hand full for ANY 154 pounder in the world. Any opponent better keep him on the canvas because his conditioning, power, tenacity & varied punch selection will make him tough to deal with over extended rounds.”

Bernstein also spent time responding to fans who weren’t sold on the performance. To punters who said Tszyu made Gausha look good, he tweeted: “You guys are both wrong. He didn’t make Gausha look good. Terrell is good, just not consistent, & he was fighting for his career & had a little success early and in landing counters after. BUT other than that Tszyu dominated him which NO other 154 pounder has done.

“He dominated virtually every round after the first two. And there really was no reason to assume he would knock out Gausha. No one else has done it and Gausha has fought some of there best 154 pounders.”

To another fan who said Tszyu looked “ill prepared for … a lot of guys”, Bernstein added: “Tszyu did something no one has been able to do to Terrell — he dominated him. Tszyu is not perfect defensively but he overcomes with power, conditioning.

“Tszyu won at least 9 rounds of this fight, so the early rough start was not indicative of the whole fight. He will give ANY 154 pounder in the world a hard time.”

Bernstein wasn’t alone in praising Tszyu’s win from the States. Veteran boxing writer Dan Rafael believed the son of a gun won every round but the first.

“Gausha obviously won the first round. I could see MAYBE one or two others at most even though I went for Tszyu in those rounds. Those scores were absurd,” he wrote.

CBS Sports’ Brian Campbell praised Tszyu on social media but also said he had some things to work on.

“Tim Tszyu proved tonight he belongs among the 154-pound elite. He also showed he’s going to need to legitimately fight his way to a possible world title. Nothing will be easy,” he wrote in a series of tweets.

“You have to respect Gausha’s chin and toughness for enduring that but tonight was about Tim Tszyu’s arrival. Consider this a step-up win.

“Tszyu is a bit too willing to stand and eat everything Gausha is countering with in order to hold his position. It may not cost him here but it’s something to watch the more he steps up in class.”

Ring Magazine’s Michael Montero hedged his bets. “He’s Kostya Tszyu’s son, already a bankable star in Australia. You know how it goes. But agreed that people really do overhype prospects in this era tho, always jump the gun. I see Tim Tszyu as a legit contender now, but he’s obviously still developing,” he tweeted.

In Ring Magazine’s recount of the fight, Joseph Santoliquito said Tim showed similar attributes which made Kostya so good.

“Tszyu had to get off the canvas in the first round to regroup, and then proceeded to show glimpses of the same desire and pressure his famous father used to exhibit in winning a 12-round unanimous decision over Terrell Gausha,” he wrote.

After the fight Tszyu revealed he had been ill through the week and had been struggling to breathe.

“I couldn’t breathe. Even now, it’s still in my lungs. For the two weeks I was here in America, it was hard work.

“I was trying to drink water and get through it, and not show it to anyone. I didn’t want the media finding out, and having excuses and s*** like that. But it is what it is.

“I had one hell of a prep, man. Two days before the fight I was coughing like a dog.

“Weight was a problem as well, but you know what, I just stuck through (it), got back up, faced adversity in training camp, in the fight, and I got the job done against a world-rated opponent.”

While it’ll likely take a world title win to truly win over America, there is little more the Aussie could have done against the highly-rated Gausha.

“It was all so quick,” Tszyu said of his early knockdown. “It was good that I faced adversity for the first time and I was able to come back.

“All respect to my opponent, Terrell Gausha. He’s a hell of a warrior and he’s a true gentleman.

“It was a simple flash knockdown. It was perfect timing. He’s a former Olympian. He’s got great credentials. That’s a great lesson for myself. I got back up and I dug deep.”