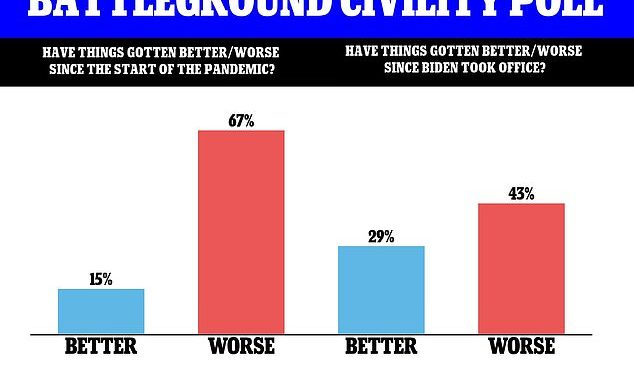 
America unites in how DIVIDED the country is and the top concern is each other: 67% of Americans say politics has got nastier since the start of the pandemic and almost half says civility has gone down hill, new poll finds

Voters are deeply concerned about growing political divisions in the country, according to a new poll, and believe that things have got nastier since the pandemic began and since President Biden took office.

The latest Georgetown Institute of Politics and Public Service Battleground Civility Poll paints a bleak picture about the direction of politics.

It found that 43 percent of voters believe political relations have become less civil since Biden was sworn in last year, while only 29 percent say they have become more civil.

Even more so, voters blame the COVID-19 crisis – with its rows about masking and mandates – and two-thirds said divisions had worsened since the start of the pandemic. 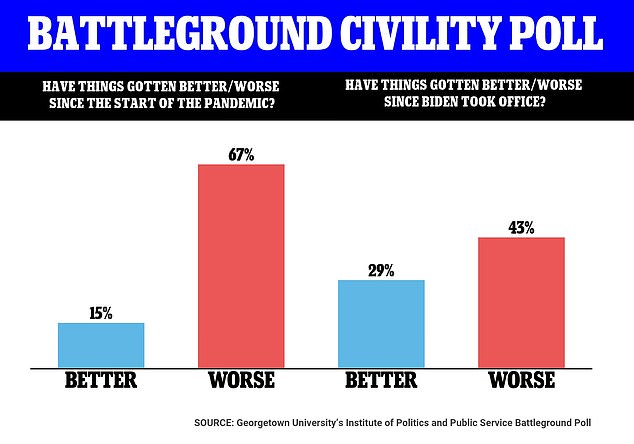 Voters are concerned about growing political divisions in the country, according to a new poll, and believe that things have got nastier since the pandemic began and since Biden took office 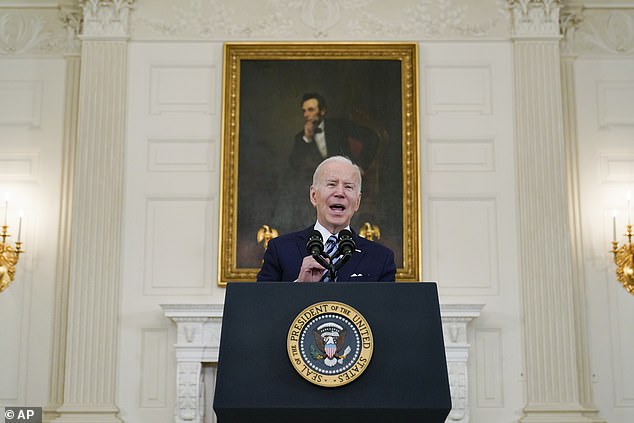 43 percent of voters believe political relations have become less civil since Biden was sworn in last year, while only 29 percent say they have become more civil

‘Politics and the pandemic are driving polarization, and voters continue to believe this is one of our country’s biggest challenges,” said the institute’s executive director Mo Elleithee.

‘When looking to the future, the bad news is that voters believe things are going to get worse before they get better.

‘The good news, however, is that they believe things will get better. And that optimism is driven by a belief that young people are committed to making the country a better place to live for everyone.’

The pandemic response has at times been marked by politicians throwing furious allegations at public health officials that they were lying.

Airlines have reported a surge in the number of disruptive passengers, spurred by federal mask mandates for passengers.

And even music streaming services such as Spotify have triggered support and boycotts over whether or not they are propagating pandemic misinformation or supporting free speech.

At the same time, last year’s Jan. 6 attack on the U.S. Capitol is seen as a potentially pivotal moment.

A majority of the 1000 voters polled said they believed there will be more violent political protests in the wake of the violence. Some 58 percent that it was more likely, compared with 23 percent who said it was less likely.

There has been a small increase in the number of people who believe the nation is headed in the right direction since the last battleground poll in October – from 29 percent to 32 percent.

Biden ran for election in 2020 with a message of appealing across partisan divides and restoring civility to public life.

The poll suggests there is much more to be done.

Ironically, the extent of the country’s bitter divisions is one of the few things upon which Americans can agree.

‘As has been the trend in the past several years of this poll, the numbers reveal that if there is one thing that unites America, it is the feeling that divisions in this country are running dangerously high,’ said Celinda Lake of Lake Research Partners.

‘Easily the most positive piece of news out of the whole survey is that when confronted with the statement, “I am optimistic about the future because young people are committed to making this country a better place to live for everyone,” over half of Americans (58 percent) agree.’