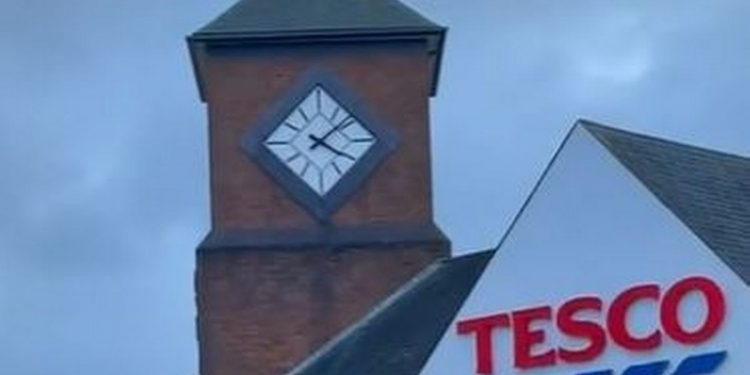 
In the UK we are recognised for many things.

Our love of tea, orderly queuing and apparently now, the clock towers on our supermarkets.

The striking feature about our culture was picked up upon an American living in the UK after they became confused as to why our grocery stores look so grand.

Eyeing up a Tesco in Hatfield, Hertfordshire, with a clock tower attached, the American was left to believe that all UK supermarkets come with their very own time telling turret.

Taking to TikTok to share their confusion, the American pleaded for some answers while showing the home county superstore.

They asked: “Can someone please tell me why all UK grocery stores have towers with small clocks on them?”

But, instead of some clarity, the expat has been brutally mocked for their query.

One person mocked: “They all double up as a church and at 9am on Sunday you must go to pray on aisle 3.”

Another user voiced: “In Britain it is considered highly offensive to enter a supermarket between 4:35pm and 4:45pm. So we need to tell the time.”

Someone else said: “Sorry we are all trained from a very young age not to let the secret out.”

Despite the American being trolled, many others left pondering the same thought about clock towers attached to shops.

So we did some digging.

Education providers OpenLearn state on their website: “Frequently, clock towers that stand alone were built in the Victorian or Edwardian periods. They were not simply supposed to be attractive, though.

“Some were sponsored by commercial firms and served as a giant advertisement for their wares; others may have been put up by local authorities or by public donations to celebrate national or local events.

“Many are attached to buildings, but many stand alone, serving as a centre point to town centres or standing in public gardens as ornaments.”

Let us know in the comments if your local supermarket has a clock tower!