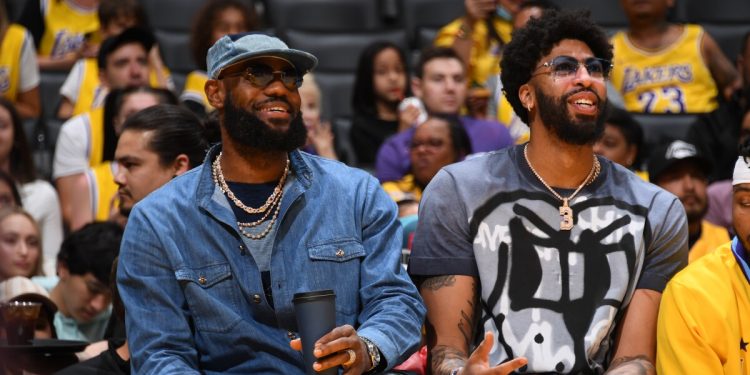 
The crowd got to cheer LeBron James one last time at home this season.

That the moment came when he walked out of the team’s tunnel in street clothes early in the first quarter of the Lakers game with the Oklahoma City Thunder seemed fitting.

The Lakers closed their season at Crypto.com Arena on Friday night — a 120-101 victory — with James on the bench, the team officially ruling him out for the rest of the season because of his sprained left ankle.

“He’s the most important piece on our team,” coach Frank Vogel said, “so not to have him was difficult, but injuries are part of the game.”

James finished the season leading the Lakers with 30.3 points per game, shooting 52.4% from the field and 35.9% on three-pointers.

The 30.3-point average is the first time he has scored more than 30 a game since 2008 and only the third time he has done it in his career.

“I appreciate it and love y’all love!” James tweeted Friday afternoon. “Wish it was done in winning fashion though! Gave everything I had to this season when I was on the floor! See y’all again in the fall.”

The Lakers, for the second straight game, played without Russell Westbrook, Anthony Davis, Carmelo Anthony and James. Vogel said the team hadn’t ruled out Davis, Westbrook or Anthony in their road game against the Denver Nuggets on Sunday.

James’ season is the first time in NBA history anyone older than 33 averaged 30 points. Michael Jordan, Stephen Curry, Jerry West, Allen Iverson, Rick Barry and James Harden are the only players to average 30 or more in a season after turning 30.

On Friday, Vogel once again called James the best to ever play basketball.

“At some point he’s not going to be able to play at the level that he’s playing. Obviously Father Time catches up with everybody, but I think everybody thought that would have been three, four, five years ago and he’s still doing it,” Vogel said. “I think it’s just going to be more of what we saw this year, MVP-level play, up until the body tells him he can’t do that anymore. But clearly that’s not now.”

James’ place among the best in NBA history was formally established earlier this season when he was honored as a member the NBA’s top-75 all-time team. Friday, with the team celebrating Kareem Abdul-Jabbar’s 75th birthday eight days early, James was joined in the building by a group of Lakers and basketball legends including Abdul-Jabbar, Magic Johnson, James Worthy, Jamaal Wilkes, Spencer Haywood, Ann Meyers Drysdale and Bill Walton.

The team honored Abdul-Jabbar at halftime, the past a much more pleasant place these days than this team’s present — which will end with the team’s game Sunday in Denver following their elimination from the postseason earlier this week.

“He’s the greatest player of all time and so to be fortunate, to be a part of that is something that I take a great deal of pride in and obviously you want to see him have those seasons play out ultimately culminating in another championship or more championships,” Vogel said.

“At the end of the day, that’s all that matters and when we fall short and we miss the playoffs there’s disappointment for a lot of people.”

While the Lakers didn’t come close to fulfilling their expectations, James was able to put on a show.

“You see greatness just raising its level right in front of your eyes,” Vogel said of James. “And you’re just in front of it and you’re in awe. It was a special year and it was awesome.”