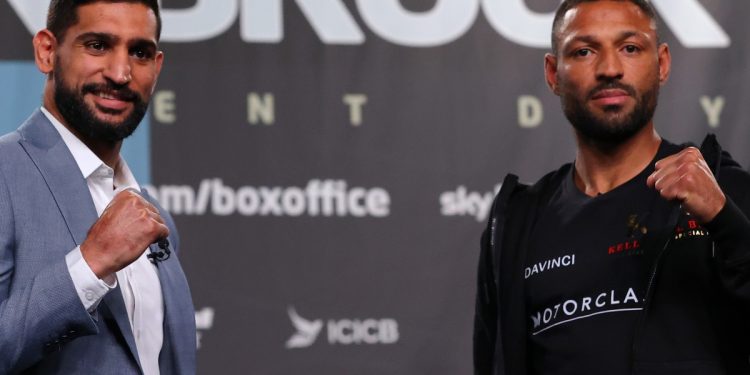 
AMIR KHAN and Kell Brook are still rowing over the weight of Saturday’s night bitter grudge.

Bolton’s 35-year-old star is the A-side in the 149lbs catchweight clash and is pulling all the strings around the bout.

And SunSport understands Khan has written a 10lbs rehydration into the deal and will fine his nemesis £100,000 for every pound he comes in over on Friday afternoon and again on Saturday at the check-weight.

The follow-up weigh-in would usually happen first thing on the morning of the fight.

But a source close to the fight also told us that Team Khan wants the extra weigh-in a brutal FOUR HOURS before the 11pm bout – which would cripple Brook and limit his time to rehydrate.

Brook and his trainer Dominic Ingle are understandably fighting for it to be much closer to lunchtime so the former IBF welterweight champ can refuel properly.

But the back-and-forth was still rumbling on through Thursday night.

“I am sure he doesn’t want to be giving me 100s of thousands of pounds, he will kill himself making that weight.

“I woke up on Thursday at 151lbs, I am naturally quite slight. I could get the weight off with a light session or a walk.”

Brook openly admits he has really struggled to make the 10st 7lbs welterweight limit since he bulked up to middleweight for a big-money loss to Gennady Golovkin in 2016.

But he claims to be very close to the agree 149lbs limit and will keep Khan guessing until the last knockings.

He grinned: “I might come in overweight. I will do whatever I want to do.

“I am on the weight fine, about 151lbs now, it will be tactical.

“I might tell some lies, there might be some mind games. He has played so many mind games for so long that I won’t mind playing some back.”

Why the panic among Boris Johnson’s allies? Because they know Brexit is unravelling | Michael Heseltine

Why the panic among Boris Johnson’s allies? Because they know Brexit is unravelling | Michael Heseltine