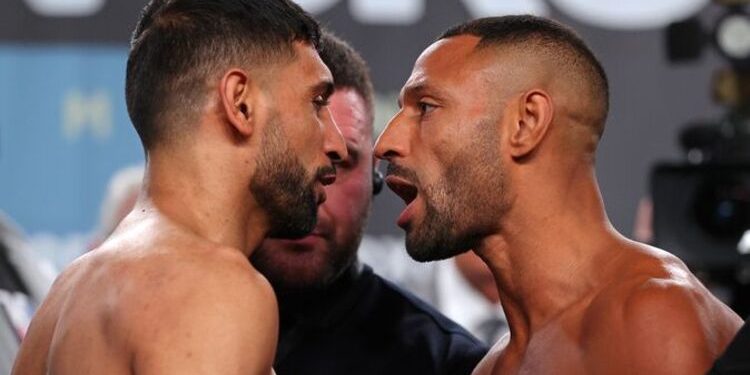 
Amir Khan and Kell Brook will face a fight-day weigh-in to ensure they have not gained more than a stone overnight ahead of this evening’s grudge match between the pair, according to reports. Khan and Brook are finally set to trade blows in Manchester in only a few hours’ time in a highly-anticipated fight that has been in the making for the best part of the last decade.

The duo have been adversaries for a long while and the idea of a fight has been touted on plenty of occasions in recent years.

However, the two camps were unable to come to an agreement until the end of last year, when tonight’s event was finally booked in after no shortage of back-and-forth between the fighters involved.

The build-up has been acrimonious and tensions threatened to boil over at Friday’s weigh-in, where Khan and Brook both came in under the 149lb catchweight limit.

The latter had expressed concerns about exceeding the limit but came in one pound heavier than his rival at 148lb to ensure that the fight will be going ahead as planned.

However, there will now be another weigh-in behind closed doors before the bell rings this evening in order to take stock of how much weight the pair have piled on overnight, according to the Daily Star.

JUST IN: Tyson Fury shuns royal honour claiming he does not want MBE

It is claimed that a clause in the fight contract stipulates that neither man can add more than a stone to his frame between Friday’s official weigh-in and this evening’s bout.

The result will not stop the event from going ahead, but each fighter will be hit with a fine of £100,000 for every pound that exceeds the agreed limit.

Khan appears to be the slight underdog with most bookmakers after having not fought in almost three years since his win over Billy Dib in 2019.

He has already insisted that he is expecting an early onslaught from Brook but has warned that the fight is likely to swing in his favour if he manages to avoid being knocked out in the first few rounds.

“For the first three or four rounds he’s going to try hard and that is sometimes when I caught early, it’s happened to me before,” said Khan.

“When ‘BoMac’ was training me, he was saying: ‘You need to be tight, you need to be smart in the early rounds because you can’t make that mistake you do sometimes’.

“If you look at those fights, [Breidis] Prescott, [Danny] Garcia, it was early in the fight when everything was going my way. I was overconfident.

“It is all about sticking to the tactics, being smart and not making any mistakes and give him a boxing lesson.”

Meanwhile, boxing expert Johnny Nelson recently urged Khan to aim at Brook’s eyes in order to take advantage of the Yorkshireman’s prior weaknesses and give himself the best chance of upsetting the odds.

“He’s had titanium plates put in to rebuild his face but he is only human. Once he starts getting hit around the eyes, it will be a mental test as to what he is prepared to take.

“Will he be worrying about his eyesight if he takes too many jabs? Amir has already been mischievous, asking: ‘How are your eye sockets?’

“It’s all part of trying to get into Kell’s head and he’ll do well to keep his cool.”

Boris Johnson: Russian invasion of Ukraine will ‘cause shock around the world’

Will your insurance cover Storm Eunice damage and how do you claim? | Insurance

Will your insurance cover Storm Eunice damage and how do you claim? | Insurance