She has jetted off to Ibiza for a sun-soaked getaway following her split from ex-boyfriend Tim.

And hoping to brush off her heartbreak, Amy Childs was seen cutting a glamorous figure as she relaxed by the pool in a plunging pink swimsuit and with curlers in her hair.

The TOWIE star, 31, who is holidaying with her two children, is believed to have split from former partner Tim a few weeks ago, following a year-long romance. 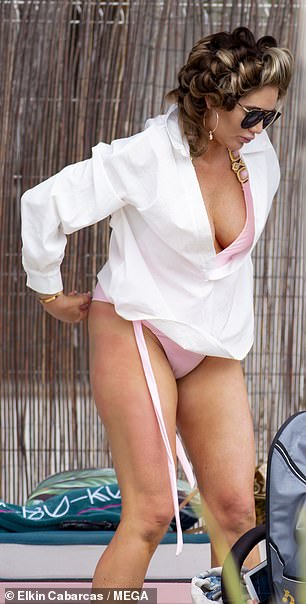 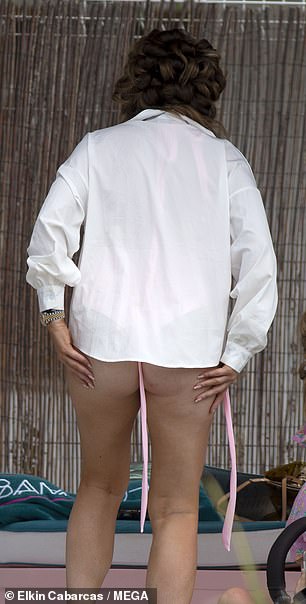 Healing her heartbreak: Amy Childs headed to Bam-Bu-Kun beach club in Ibiza on Thursday and was seen relaxing by the pool in a plunging pink swimsuit and curlers in her hair, after jetting overseas following her recent split

Heading out on the White Isle on Thursday, Amy was seen stopping by Bam-Bu-Kun beach club with daughter Polly, four, who she shares with ex-boyfriend Bradley Wright, and her son Ritchie Jr, two – from her former relationship with businessmen Ritchie.

As always, Amy made sure to bring the glamour with her as she was seen wearing her highlighted hair up in rollers and big aviator shades.

The reality star slipped into a busty pink halter-neck swimsuit for her pool day, with her jazzy one-piece boasting pink and gold jewelled detailing at the straps. 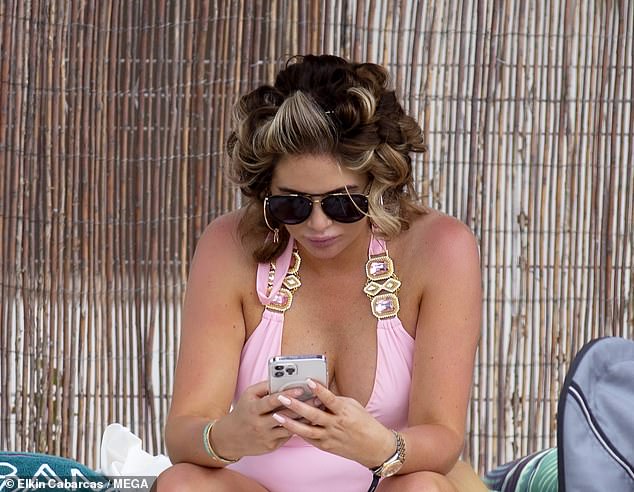 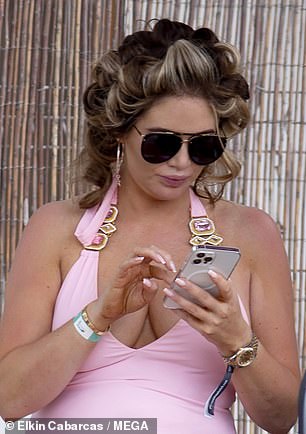 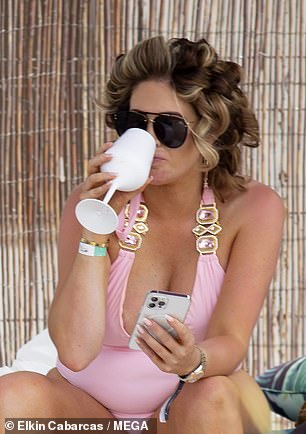 Kicking back: Amy, who was joined by her two children, daughter Polly, four, and son Ritchie Jr, two, was seen glued to her phone as she indulged in a spot of R&R on her sun-soaked break 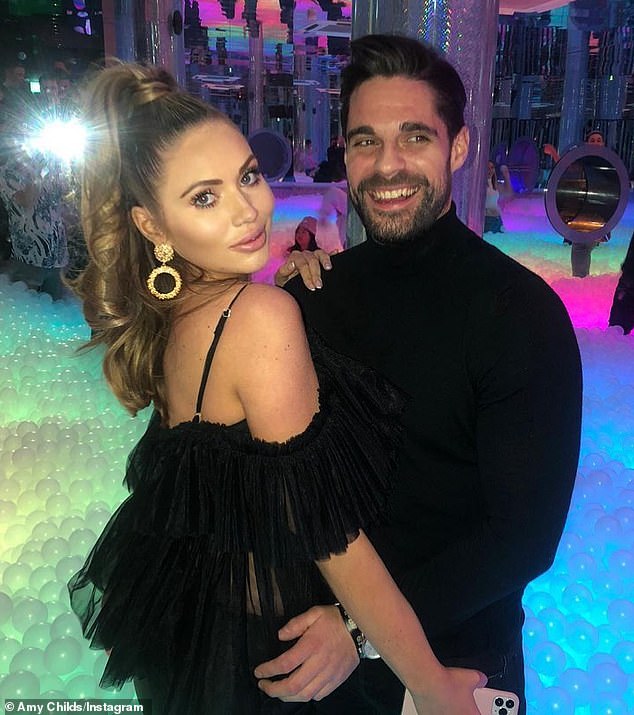 It’s all over: Her holiday comes following Amy has split from boyfriend Tim – just 14 months after calling him ‘The One’ and declaring her love for him on social media – who she had been living with during lockdown

She was seen glued to her phone as she topped up her tan and quenched her thirst from a plastic white wine glass, as she relaxed with her kids in the sun.

The beauty was later seen covering up in a loose-fitted white shirt, while leaving her bronzed legs on display.

She was joined at the beach club by her friend Nikki, with Amy posting a selfie of the pair to her Instagram story.

The Essex star also revealed she had spent the day with Celebs Go Dating’s Wayne Lineker, with the pair enjoying a poolside reunion.

Wayne, who is the owner of O Beach Ibiza, cuddled up for a selfie with Amy, as she shared online: ‘Lovely seeing my good friend @waynelineker today.’ 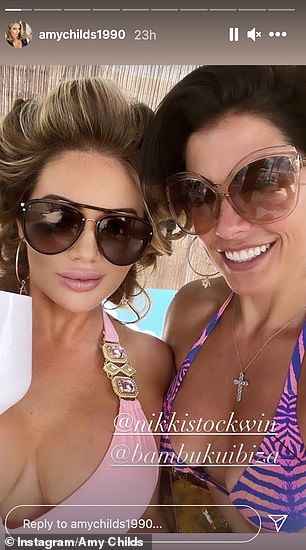 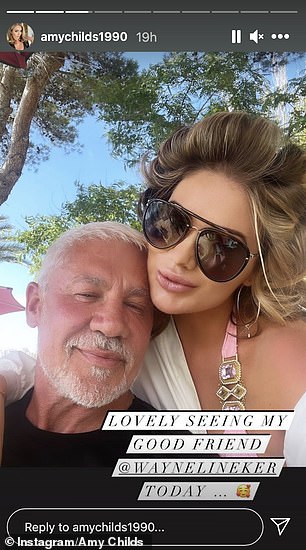 Having a ball: Amy was seen spending the day with her friend Nikki (pictured left) while at the beach club, as well as enjoying a reunion with Celebs Go Dating star Wayne Lineker (pictured right)

A source told MailOnline: ‘Amy and Tim are both heartbroken. They really hoped to make the relationship work, but the romance between them fizzled out.’

The insider revealed Amy has headed overseas to ‘heal’ her broken heart, adding: ‘The breakup is still raw, so Amy is taking some time for herself in Ibiza, where she can have some space to get over things.’ 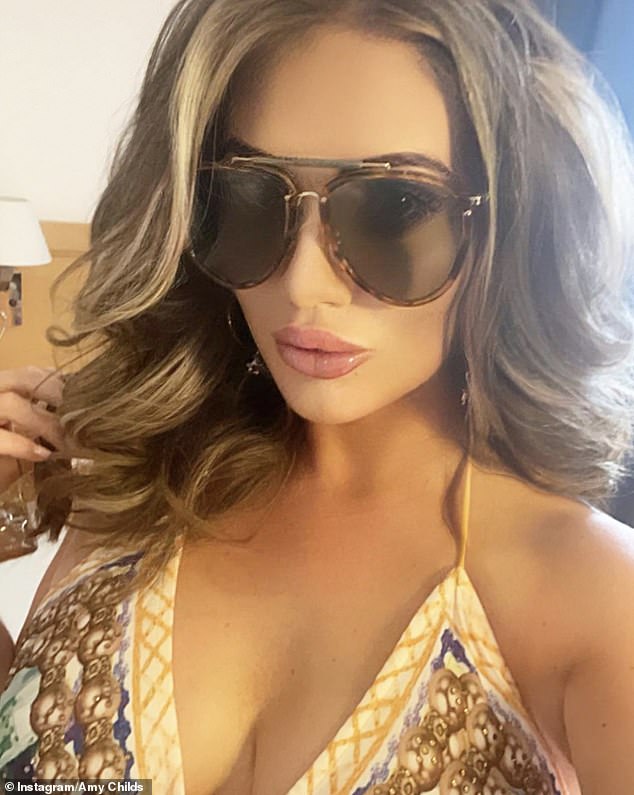 Hitting the town: Amy was later all dressed up to hit the town for the evening as she shared a selfie with fans on social media

Amy confirmed her relationship with Tim in April 2020, sharing a now-deleted picture alongside the caption: ‘When you finally meet the right one for you, it suddenly becomes clear why everyone else was so wrong… I love you.’

And last month, Tim dedicated an Instagram post to Amy in honour of her 31st birthday, writing at the time: ‘Happy Birthday to my gorgeous girlfriend. Love you so much.

‘We have had a fantastic weekend. Let’s hope the rest of your birthday month is as good.’

Tim also posted about Amy on Valentine’s Day, earlier this year, thanking her for making him ‘so happy’, with the reality TV veteran commenting on his upload: ‘I love you.’

In another loved-up post to mark Amy’s 30th last June, Tim declared: ‘I love you more than I have ever found a way to say to you.’

The former couple had been living together at her Brentwood home during lockdown, with Tim becoming part of the family as he spent time with Amy’s kids and her cousin and TOWIE co-star Harry Derbidge, 27. 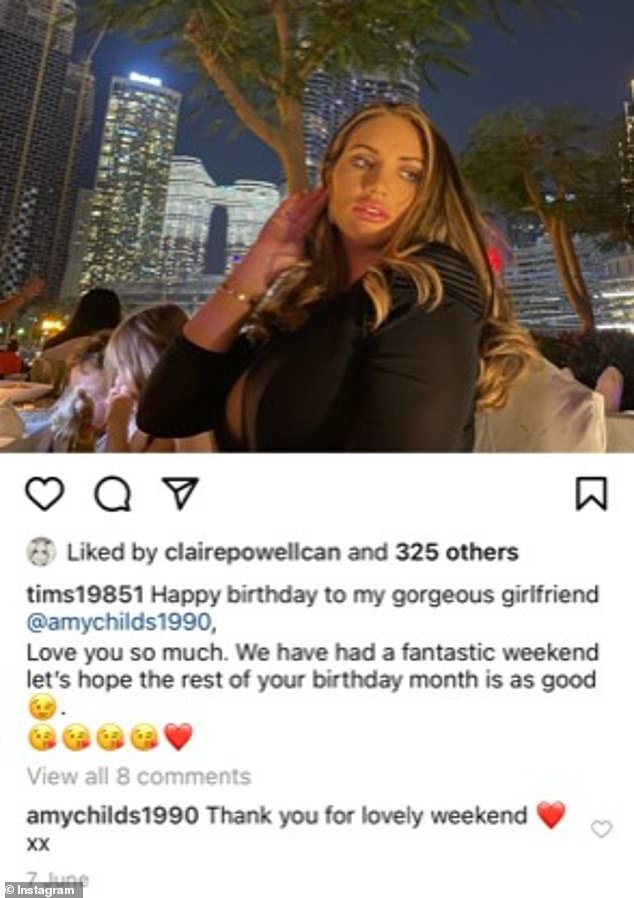 Better times: Last month, Tim dedicated an Instagram post to Amy in honour of her 31st, writing: ‘Happy Birthday to my gorgeous girlfriend. Love you so much’ 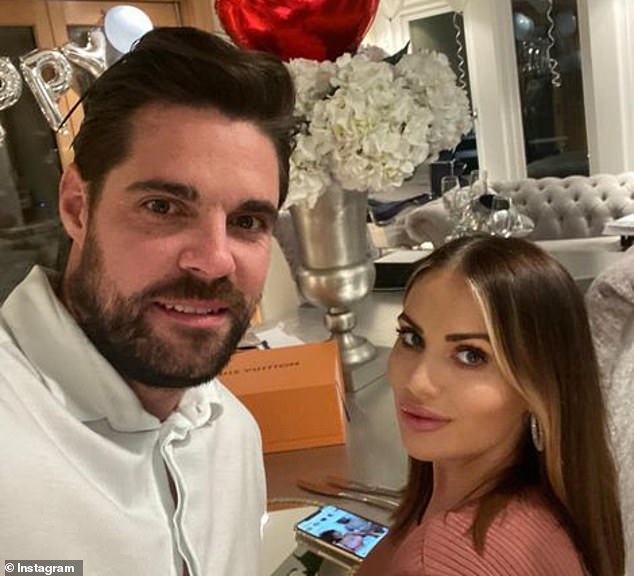 ‘Thank you for making me so happy’: Tim posted about Amy on Valentine’s Day, earlier this year, with the TOWIE veteran commenting on his upload: ‘I love you’

During filming, Amy was left humiliated and said she was in ‘absolute shock’ after one of her potential suitors, Jamie, was unfaithful to her, kissing another contestant on the show.

Amy, who at the time said she was ‘gutted’, insisted the situation was made worse by the fact Jamie had met her daughter Polly, as well as her mum – two people that mean the world to her.

‘I feel completely mugged off. You’ve met Polly and that’s such a big thing for me, a guy meeting Polly, I don’t just do that. You’ve met mum and everything, and I feel massively let down,’ Amy explained.

They were together for two years from 2013 to 2015, but split when Bradley was jailed for 16 months for handling stolen goods. in 2016, they rekindled their romance following his release from prison and Amy gave birth to Polly in April 2017.

Just months later, she revealed she and Bradley had split after he failed to meet her expectations as a father and she ‘felt like she was his mum’.

Speaking to OK! magazine, Amy said at the time: ‘Towards the end I became more like a friend and his mum… I think he was just so over [having a baby around]. When she was crying in the night, he wouldn’t come in and say, ‘Can I help?’ It was always me.’

Amy then revealed she was pregnant a second time after finding love with businessman Ritchie. She chose to keep his identity private at the time she announced she was expecting, telling fans: ‘My partner and I are delighted to announce that polly will soon be welcoming a little brother or sister Into the world. We are beyond excited!’

After almost two years together, it was revealed in August 2019 that Amy had split with Ritchie, with sources revealing at the time that the pair had ‘remained good friends’ despite their break up. 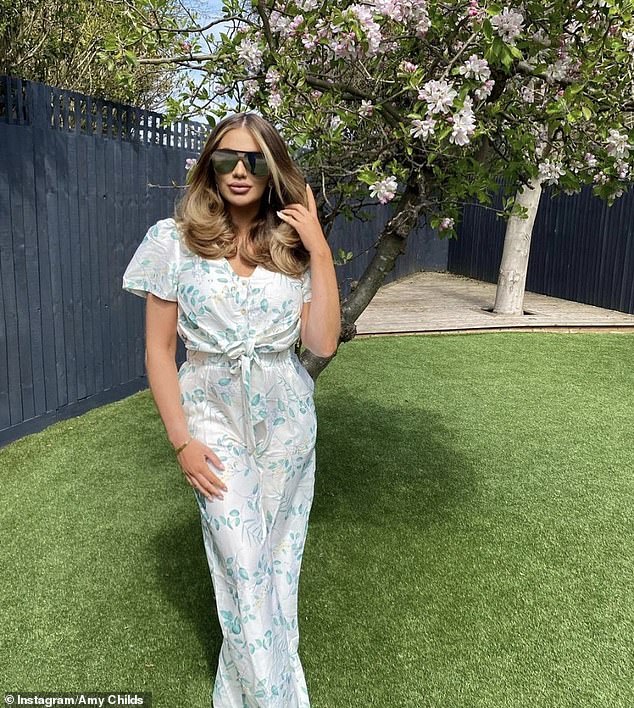 Proud mum: Amy is mum to two kids she shares from previous relationship – she shares daughter Polly with ex Bradley Wright who she split from in 2017, and son Ritchie Jr with her former partner Ritchie who she broke up with in August 2019