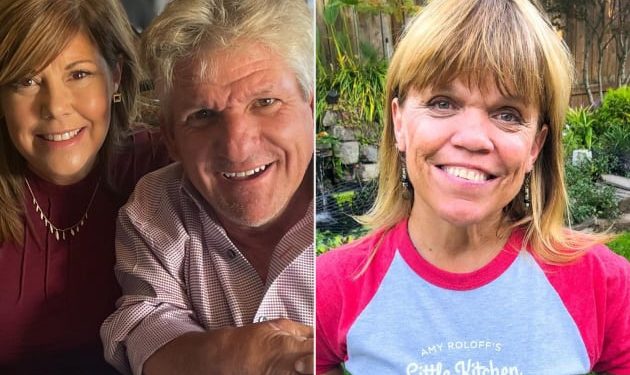 Amy Roloff has weighed in on FarmGate.


And you can probably guess on whose side she falls, right?


About a week ago, Matt Roloff put 16 acres of his farm for sale, writing on Instagram at the time:


“It’s time to move toward the next season of life.”


This is perfectly fair and reasonable in a vacuum, of course.


Matt has lived on the property and worked on it as a business for over three decades, having hinted for awhile that he’s ready to retire in the somewhat near future.


HOWEVER, it had long been assumed that Matt would keep the farm in the family, selling it at some point to either Zach or Jeremy Roloff.


On this past Tuesday’s season premiere of Little People, Big World, we witnessed a tense negotiation between Matt and Zach in regard to the property.


This negotiation took place months ago, however, back when the episode was filmed.


Far more recently — like, just a few days ago — Zach left a Comment on his dad’s Instagram page, absolutely tearing Matt apart for what he said about the sale and/or Zach’s alleged opportunity to be the next owner.


The father of four, you see, wrote that his “ultimate hope was that the entire Roloff Farms property would stay in our family for generations to come,” but:


“My twin boys decided not to consider working together toward a possible joint sale.”


Matt added at the time:


“Both of them (along with their growing families) had moved on to other interests and investments….


“and even tho a substantial family discount and a “gift of equity” was offered by both Amy and I….(and I still owe Amy a bundle of money) ..they decided individually that the timing was not right for them to purchase a part of the farm at this time.”


Zach clearly took MAJOR exception to this summary of events.


Tagging his father directly in his remarks, Zach replied that “this post is extremely misguided and false. My dad is manipulating the narrative right now before the season comes out.”


In a stunning rebuke, he added:


Once again like he has for most of his life not taking responsibility for his own actions and blaming others. Dragging the family drama that he created and then manipulate the fan base to make himself come out okay.


Where does the Roloff matriarch stand on this uncomfortable and unfortunate feud between her son and ex-spouse?


“It’s just a very sad situation, in my opinion, because this is personal to me…” Amy said early in an Instagram Live chat on  Friday.


“The business was part of our personal life so it will never just be business.”


Amy — who sold her portion of the farm to Matt in late 2019 and then moved about 15 minutes away — continued as follows:


“You can’t treat those that are directly a part of your family, and assume — because it’s business — [they’re] like any other vendor.


Translation? Yes, Matt deserves to earn a profit on any deal… but his own children deserve to be treated in special fashion as well.


“No one assumed [they’d] get anything for free, or less-than…I think they all knew that Dad deserves something,” Amy added.


Amy then acknowledged that Matt’s focus on the business has hurt the family over the years.


“Everything comes at a cost, and this has come at a big cost,” she told followers.


“But we will always all see it differently and that’s the unfortunate thing. But I feel for my boys. Something that they were brought up with didn’t happen in the way we thought it would.”


Amy admitted it will be “weird” to see the property in a stranger’s hands because the farm is “definitely part of all us.”


But, yes, at the end of the day… this is Matt’s decision to make.


“It is Matt’s choice,” Amy said. “He has a loan with me, to pay off my amount, the buyout amount…so he needs to pay, rightfully so, my half…but he owns that. So it is his choice; he can do whatever he wants.


“But it’s solely his choice what he does with it because he owns it. He doesn’t have to report to me or report to ask anybody anymore.”