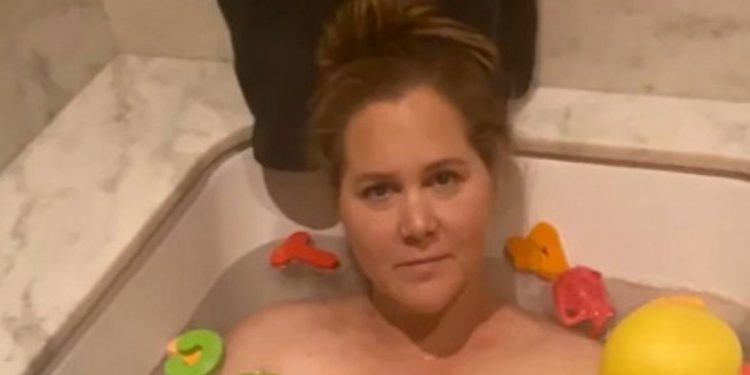 Amy Schumer is set to host the Oscars (

Comedian Amy Schumer has declared she’s a “boss a** b***h” after being named this year’s host for the Oscars.

The 40-year-old actress shared news of the announcement by uploading an which broke the news.

In the background, Amy had rapper Nicki Minaj and PTAF’s song Boss A** B***h playing.

The news of her hosting duties first broke on Good Morning America on Tuesday and Amy boasted that she, along with Regina Hall and Wanda Sykes, would be “making history” with the gig.

While the three will have key roles in the ceremony, it’s currently unclear as to how the show will be set up.

The event is set to take place on March 27 after Covid-19 restrictions meant the 94th edition of the Academy Awards was pushed back by over a month.

The trio will take to the stage at Dolby Theatre in Los Angeles and it will be the first time an all-female line-up will front the awards.

Amy Schumer posed nude in the bathtub on Valentine’s Day
(

Amy Schumer will host the Oscars on March 27 in LA
(

The announcement came shortly after Amy had posed naked for her 11.3 million Instagram followers.

Taking to her Story, she wrote “Happy vday” as she took a bath and covered her private parts with a selection of bath toys, including a huge rubber duck and an array of alphabet letters.

The toys are sure to be her two-year-old son Gene’s after the star gave birth in 2019.

Her pregnancy wasn’t entirely straight forward and she has previously spoke about the health issues she experienced throughout due to her struggle with hyperemesis gravidarum.

The condition can lead to frequent nausea and vomiting and Amy said on Instagram: “I threw up violently and felt sick mostly every day of my pregnancy. Hyperemesis is real and it’s awful.”

She has also spoke candidly about having to have her uterus and appendix removed during endometriosis surgery.

In September, Amy told fans that she underwent surgery for her condition over the weekend, sharing a short video clip of herself lying in a hospital bed on Sunday, following her hysterectomy.

The doting mum has previously been vocal about her battle with endometriosis – which is a condition where tissue similar to the lining of the womb starts to grow in other places, such as the ovaries and fallopian tubes.

Amy’s condition can cause considerable pain – and it can also affect fertility.

During her surgery, Amy shared that her doctor had to remove her appendix because the endometriosis had “attacked it”.