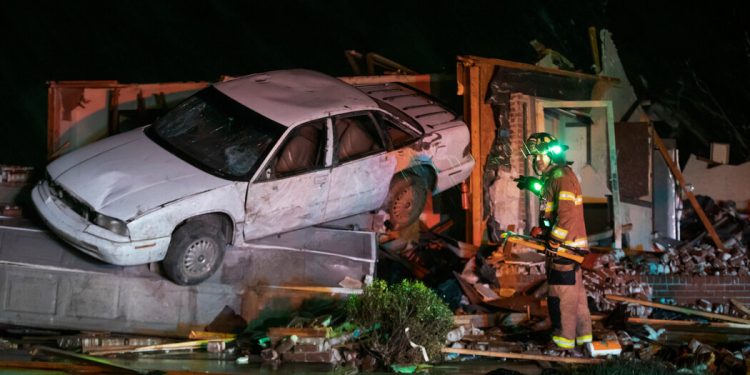 A tornado that tore through a city outside Wichita, Kan., on Friday night caused significant damage, ripping through houses and power lines, uprooting trees and heaving cars onto buildings. No fatalities were reported.

Earlier reports put the number of damaged structures in the city, Andover, at 50 to 100, but additional field reporting from emergency crews on Saturday revealed that as many as 1,000 structures may have been damaged, as officials continued to conduct inspections to determine the full impact.

The damage path extended about four miles north of where officials thought it ended Friday night, said Mike Roosevelt, deputy chief of Andover Fire and Rescue, in a news conference Saturday afternoon. He added that the number of damaged structures would likely “continue to rise as the day goes on.”

Emergency management officials said that only a few people suffered injuries, and most were minor, though one firefighter was taken to an area hospital with non-life-threatening injuries.

Chad Russell, fire chief of Andover Fire and Rescue, said in an earlier news conference broadcast on Wichita television station KAKE that “quite a few” people had to be rescued late Friday night but that no one remained in need of rescue as of Saturday morning. In some of the neighborhoods, he added, “houses were completely blown down.”

Residents received warnings from the National Weather Service eight minutes before the tornado struck. Their quick response to the warnings prevented more severe injuries and fatalities, said Chance Hayes, a meteorologist with the service. “They sheltered in homes, they sheltered in businesses, they sought shelter any place they possibly could to get out of harm’s way,” he said.

Jalynn Michler, 31, was trying to coax her 5-year-old daughter to practice for a weekend dance recital when warning sirens started blaring. Within moments, she said, a friend called to tell her a tornado was heading her way. The friend texted her a video showing a dark, twisting cloud that appeared to be just behind Ms. Michler’s home.

“She said, ‘Get your girls in the basement now,’” Ms. Michler said. “By the tone of her voice, I knew it had to be close to the house. We get tornado threats all the time and normally you just walk down to the basement, but this was completely different. This one was real.”

Ms. Michler rode out the storm with her husband and two daughters in a basement bathroom. They emerged to find their home intact, but Ms. Michler learned that Prairie Creek Elementary School, where she works as a special education teacher, had been hit. There, windows and parts of the roof were blown out, according to residents. School officials were assessing the damage on Saturday.

Renee Thompson Cunningham, 51, spent Friday evening with her husband and two sons sitting in their driveway watching the brewing storm. But what the family thought was a routine spring rain turned ominous when Ms. Cunningham’s 14-year-old son pointed to a “huge dark cloud,” she said.

“He was pointing out the cloud, and we watched it start spinning, and then it just turned into this full tornado,” Ms. Cunningham said. “I’ve never seen anything like that in my life. You could see the debris fly up from the field behind our subdivision. It just got bigger and bigger.”

She said that while her family was lucky, and her house went untouched, a friend lost her entire home. “They hid under the stairs and got trapped,” Ms. Cunningham said. “But some people heard them yelling for help and got them out.”

The tornado that hit Andover was one of several that touched down in Kansas and Nebraska. Damage from tornadoes elsewhere in those states was less severe, according to the Weather Service. Hail up to four inches in diameter was reported in a rural area of southern Nebraska.

The tornado came just a few days after the 31st anniversary of a severe tornado that hit Andover in 1991, killing 17 people, 13 of whom were in a mobile home park.

Brandon Whipple, the mayor of Wichita, said on Saturday that an emergency response had begun in city, including a shelter that was opened in a church. He urged people to remain off the streets to make way for emergency vehicles. “PLEASE stay safe, respect the warnings and have a plan of action in case another tornado touches down,” he wrote on Twitter.

The tornado in Andover, a city of nearly 15,000 people, was part of an intense storm system that damaged houses, trees and power lines in several Kansas counties, state officials said.

In addition to hitting Butler County, which includes Andover, the tornado struck part of Sedgwick County, west of Butler, although only minor injuries were reported, according to Sedgwick County officials.

The Andover Police Department advised followers on its Facebook page not to travel into the city. The police also confirmed that many roads leading into the city — some littered with debris and downed power lines — were closed so that they could properly assess the extent of the damage.

Winds of up to 45 miles per hour were expected to continue in the Wichita area on Saturday, according to the National Weather Service, creating potentially hazardous conditions for emergency crews. Potentially severe thunderstorms are also expected on Monday.

As officials assessed the damage, Gov. Laura Kelly of Kansas declared a state of disaster emergency on Friday evening.

“We have learned from past experience that we can’t wait for the storm to hit before we respond,” she said in a statement. “By taking these steps early we are able to more quickly react when the counties ask for assistance.”