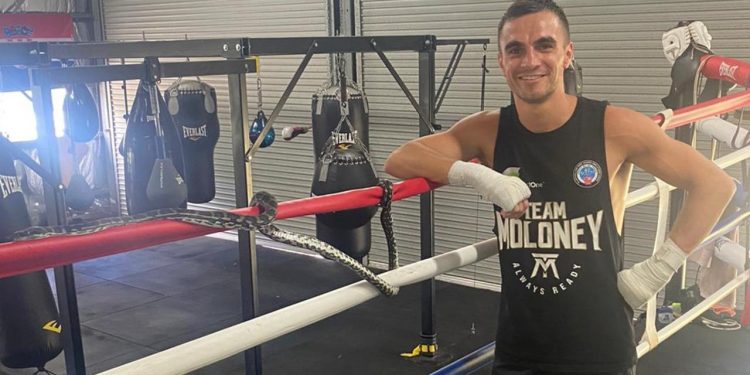 Australian boxing twins Andrew and Jason Moloney have been filmed training against a snake inside a boxing ring.

THE Moloney brothers have brought in a unique sparring partner to prepare themselves for world title bids – a snake.

In a scenario that will be added to the “only in Australia” records, the Kingscliff boxing duo came face-to-face with a snake while training in Cudgen, in the NSW Northern Rivers.

“He was a fiery one and kept trying to attack us,” Andrew Moloney said.

“I was unimpressed with my reflexes. I was pretty slow at getting out of the way. I think I need a bit more work with the snake.

“We have had about three or four there in the last six months. The gym is close to the bush and a fairly large property. They like it because it gets hot in there. There was a bigger one about a month ago but this was the most fiery of the lot.

“We have no idea what type it was but the coach said it wasn’t venomous and then made Jason release it.”

It could be the perfect preparation for the pair who have a big 2022 lined up.

Jason is hoping to lock in a WBC bantamweight world title eliminator against Nawaphon Kaikanha, with the winner earning a shot at current champion Nonito Donaire later this year.

“Hopefully some time this year I can have another crack at the world title,” Jason said.

“Nonito is a future Hall of Famer. I have sparred with him in Las Vegas before and did really well.

“It is the fight I have wanted for a long time and would be a dream come true to take on a champion but also win the belt by beating a legend of the sport. I am one fight away from making it happen.”

Andrew, who fights at super flyweight, hopes to fight on the same card and is likely to secure an opponent for the event soon.

“Hopefully it is someone ranked quite highly because for me it is about climbing back up the rankings to get another shot at the world title.

Andrew is ranked fourth in the WBA division and seventh in the WBO and WBC.

Pressure mounting on ‘chipper’ Andrew to reveal who funded settlement