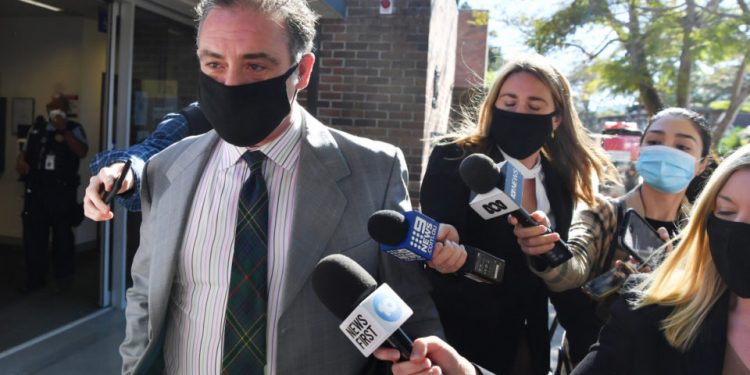 Andrew O’Keefe has been refused bail after his alleged victim was forced to bite her way out of his chokehold, a magistrate has been told.

The former Seven Network television presenter appeared via video link in Sydney’s Central Local Court on Friday with his lawyer saying her client acted in “self-defence”.

The 50-year-old appeared visibly distressed crying out “oh God … this is ridiculous” while his alleged crimes were aired in court, and after he was refused bail.

“Unbelievable,” he said, before demanding to see “the evidence”.

O’Keefe was already on bail for a separate alleged incident of assault when he was further charged with another two counts of intentionally choking a person, three of common assault, and assault occasioning actual bodily harm.

The seasoned television host was arrested on Thursday after allegedly grabbing a 38-year-old woman by her throat before pushing her to the ground and punching her in a Sydney CBD unit on Tuesday.

The woman turned up at his Kent Street apartment “uninvited,” and caused “substantial injuries” to O’Keefe during the fight, his lawyer Sharon Ramsden submitted.

Police prosecutor Chris Manning said photographs of the woman showed she suffered “significant marks to the face and legs”.

“The only way she was able to break free [from] the intentional choke is to bite the arm of the accused and that’s supported by visible injuries,” he said.

Sergeant Manning submitted O’Keefe was a risk to the public given this particular incident had been going on “for some time”.

“There have been three offences of violence all within a short period of time,” he said, adding O’Keefe’s violent behaviour appeared to be “escalating”.

Magistrate Robert Williams said there was a good chance O’Keefe would be serving jail time if convicted, noting his past similar alleged offending.

O’Keefe has never been convicted after having domestic-violence charges dealt with under the Mental Health Act in June 2021.

A medical report tendered in court outlined the former Deal or No Deal host’s clinical depression, post traumatic stress disorder, and “severe” methamphetamine use disorder, among other conditions.

Late Thursday afternoon O’Keefe was captured on video yelling expletives at surrounding media from inside his paddy wagon and loudly banging while being transported from Day Street Police Station.

O’Keefe, a former lawyer and son of former NSW Supreme Court judge Barry O’Keefe, was a founding member of domestic violence charity, the White Ribbon Foundation, where he served as chairman in 2017.

The organisation – which went into liquidation in 2019 – said in a statement it was disappointed to hear of the allegations against O’Keefe, as with “many other distressing incidents of violence against women already this new year”.

The organisation had already distanced itself from the one-time ambassador last year, and said it was “dismayed to hear the news” of his arrest.