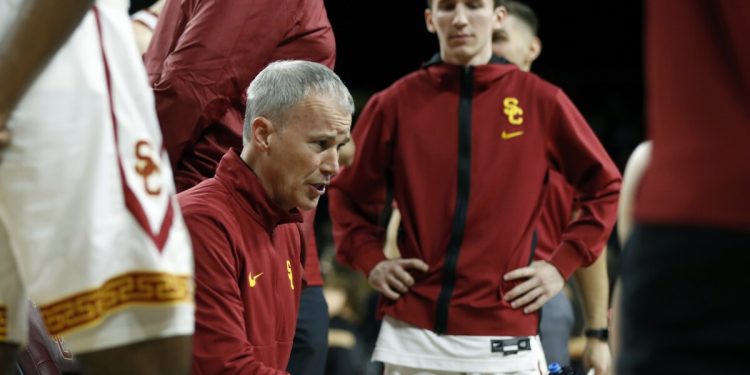 Don’t worry, he’s used to it by now. After nearly a decade spent trying to reawaken a catatonic college basketball program, the coach understands you might have been asleep for most of the Trojans’ tip times. Maybe, for one reason or another, you’ve neglected to notice how far USC has climbed since he took over — the Elite Eight run last season, the record wins this season, a top recruiting class incoming. Or maybe, in spite of all that, you just don’t believe in him or USC hoops.

Either way, Enfield has a stat for you.

The coach knows, to those unaware of USC’s surprising string of success, that his regular references of the Trojans’ statistical standing makes for compelling context to the program’s rise. So Enfield has committed many of his favorite stats to memory, filing them away for whenever the moment might call for a reminder. Which, in his mind, tends to be quite often.

Those preferred mile markers have evolved over the years from relative minutiae — like former point guard Jordan McLaughlin’s assist-to-turnover ratio — to more macro measures, like wins among Power Six programs during the past three seasons (73) — a number that trails only Baylor and Kansas, two of the NCAA tournament’s four top seeds.

The shift is telling of a change in the Trojans’ trajectory during Enfield’s tenure. But the conceit behind his regular reciting of stats remains the same.

“Who else is going to stick up for us, if not me?” Enfield said last week. “Nobody.”

So as USC prepares for its fourth tournament appearance in nine seasons under the coach, a journey that begins Friday as a seven seed against 10th-seeded Miami (Fla.), Enfield leans back in his office chair, happy to relay some credentials — and point out some perceived slights.

It’s a line he still regularly straddles. As he closes in on a decade as USC’s coach, the perpetual chip on Enfield’s shoulder is still intact, even if he assures he doesn’t internalize the disrespect.

“At certain times, the head coach needs to stick up for his program,” Enfield says. “Because of the West Coast time difference, I’ve had the feeling over the last few years that some parts of the country, whether it’s the fans or the media, haven’t recognized that there are good teams in the Pac-12 and USC is one of those good teams. We’ve had a lot of good players and teams here over the last few years. I think there are appropriate times when a head coach can and has to stick up for his program because no one else is.”

Enfield rarely misses a chance to defend USC’s progress. His case has only grown more convincing in recent years, culminating with the Trojans’ run to the Elite Eight last March.

“He knows the job he’s done here,” assistant coach Chris Capko said. “I don’t think he cares to be recognized or anything like that, but he wants you to know how far this program has come.”

That’s where the numbers come in.

When the pandemic prompted the 2020 tournament to be canceled, Enfield asked USC’s director of operations, Mike Swets, to take on a project. His task? Find some statistical context to underscore exactly where the program stands in relation to the rest of college basketball.

The final result was multiple Excel sheets loaded with data Swets still updates once or sometimes twice weekly. Different tabs track USC’s conference and out-of-conference records compared to its Power Six peers over the last two years, three years, and so on. Another counts NCAA tournament wins among coaches with less than 10 years of experience. In that category, Enfield (7) trails only Texas’ Chris Beard (10) — a stat that Enfield was happy to relay.

“It’s important to put in context what’s being done now versus the past,” Swets said. “Once you look at the numbers — well, even I didn’t fully appreciate where we stood.”

“I ask myself all those questions: When will we get our respect? We made an Elite Eight. We had a top-three pick in the draft. We had Big O [Onyeka Okongwu]a top-six player in the draft before that. We had all these guys. We’re winning.”

When Enfield was first hired at USC in 2013, the program was nowhere close to level ground. Riding high from Florida Gulf Coast’s stunning Dunk City run, Enfield chose USC over multiple other coaching offers and quickly realized the job required a major rebuild. Four starters were gone, including future NBA center Dewayne Dedmon. The only returning starter, J.T. Terrell, would miss eight games early in the season because of academic issues.

The culture wasn’t in a good place, either, recalls Byron Wesley, who led the Trojans in scoring during Enfield’s first season. Most USC players loved Enfield’s wide-open offense, which was the “polar opposite” of previous coach Kevin O’Neill’s more strict system. But some didn’t appreciate the new coach’s other efforts to implement change.

Wesley remembered the team reacting poorly to the first time Enfield gave them a curfew.

“Everyone was doing their own thing. Guys were living it up in L.A.” Wesley said. “I don’t think we prioritized winning and basketball over everything.”

The Trojans didn’t do much winning that first year — or the next. They started just 5-31 in Pac-12 play over Enfield’s first two seasons. But the last of those five wins — a victory over Arizona State in the conference tournament — suggested to USC’s coaching staff that change was on the way. USC made the NCAA tournament the next season.

Only 12 teams in the Power Six have won more games than USC in the seven years since. That group consists primarily of basketball blue bloods like Kansas, Duke, Kentucky, and North Carolina. Even UCLA sits 10 wins behind its less established cross-town rival.

Yet the apprehension to count USC and its coach among the nation’s best persists.

“They never give us our respect,” forward Max Agbonkpolo said. “UCLA will do one thing well for our five things we do well and they get the respect — I don’t even know. I ask myself all those questions: When will we get our respect? We made an Elite Eight. We had a top-three pick in the draft. We had Big O [Onyeka Okongwu]a top-six player in the draft before that. We had all these guys. We’re winning.”

Those credentials were apparently compelling enough this season to garner attention from other schools, like Maryland and Georgia, who were searching for a new coach. Enfield had already signed a contract extension at USC in light of the Elite Eight run, but that new deal was short enough on guarantees that Enfield was expected to consider other offers.

USC never let it get to that point, inking Enfield to a new six-year contract earlier this month that included more guaranteed years and money. The vote of confidence was not lost on USC’s coach.

“It means a lot,” Enfield said, “because it shows the commitment from the president’s office to the athletic administration and [athletic director] Mike Bohn, what their vision is for the program and that there’s enthusiasm for where we are and where we want to go.”

There are still plenty of mile markers left to reach for USC basketball. But as Enfield positions the Trojans for another postseason run, the results, Bohn told The Los Angeles Times, have spoke for themselves so far.

“Andy’s longevity as our coach is critical for us,” Bohn said. “He’s been a big part of changing the trajectory, the respect and the reputation of the program. All you have to do is look at the number of players he’s put in the NBA, the number of wins.”

The numbers certainly tell a story of how far USC has come, one its coach has been trying to tell you all along.