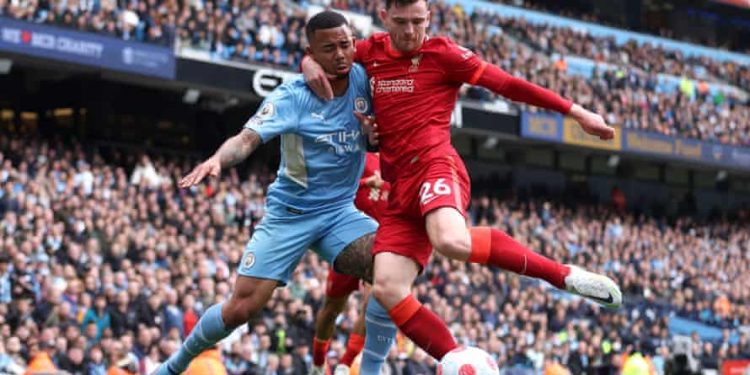 
Andy Robertson insists Liverpool have to be “ready to pounce” should Manchester City drop points as the title race enters its closing seven matches.

Sunday’s thrilling 2-2 draw at the Etihad Stadium leaves City a point ahead of Jürgen Klopp’s team and for all associated with Liverpool, there may be a feeling that this season will replicate the 2018-19 campaign when both sides kept winning during the home straight and it was ultimately Pep Guardiola’s men who triumphed, 98 points to 97.

“We just need to keep winning games,” said Robertson. “We had to do it that year and we have to do it this year. It’s obviously out of our hands, if they win all their games then it is their league but if they do drop points we need to be ready to pounce. The only way of doing that is by winning games, if we do that then let’s see where we end up in May.”

Asked if City have the easier set of remaining games, Robertson added: “We can only focus on ourselves. I think we have got a really tough run-in, all games are tough in the Premier League especially when you get to the end bit. But we have some really tough games and we need to try to win them, we need to be at our best, we need to be better than we were [against City] and if we do that then let’s see where we end up and hopefully we can win something. If not, we will give it our best shot.

“Time will tell [if we need to win them all]. You never know. We need to win as many games as it takes – it’s as simple as that. We wait to see what results happen, we need to keep dealing with each game as it comes.”

Robertson offered a simple formula regarding how players approach such an intensive period. “Just keep focusing on the next one,” said the left-back. “We are already focused on Benfica now. We have a lead but we need to get through. We need to try to win that and then get into the semi-finals. If we do that then we focus on the next one. We are still fighting on all fronts, we still have a lot of games to play and if we win hopefully it ends with silverware.”

A New Twist Of Fate: Wrestling superstars sign up for return of 1PW live shows and streaming