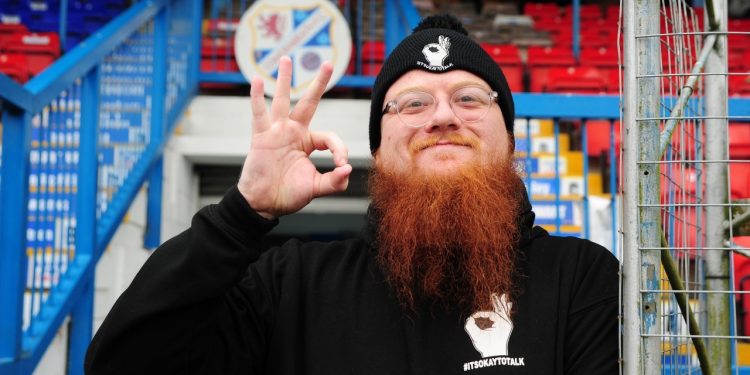 A COWDENBEATH man who was “lifted twice by the police” when at his lowest is helping to open an Andy’s Man Club in the town.

Following family bereavement two years ago, the now 26-year-old was struggling to cope, and he knew he needed help.

Taking advice prescribed by his GP, he decided to step through the doors of the club’s branch in Dunfermline for the first time.

With his pal by his side, they entered together, and the decision was one James would never regret.

Speaking to the Times this week, he cites it as “the best decision I’ve ever made”.

Now in better health after being a regular attendee of the sessions in Dunfermline, he will soon be welcoming men from age 18 and over to a location much closer to home.

It was announced last week on social media – to widespread support from the community – that Andy’s Man Club would be opening a new branch at Central Park.

From June 13 at 7pm, the stadium will host the group every Monday for the foreseeable future.

Understanding that opening up and speaking about mental health remains a challenge for many men, James recalled his own trepidation about doing so at his first visit to Andy’s Man Club.

However, in an appeal to any man inwardly expressing dread at the thought of attending Central Park and following James’ example, he stressed: “It was daunting stepping through those doors for the first time, but I have never looked back.

“You don’t even have to talk, either. You can just listen and take it all in, or you can talk. There’s no pressure on you.

“You are greeted by the facilitators when you come in and there’s a tea or coffee waiting for you, and it is a safe place.

“If you are hesitant about going for the first time, I completely understand that hesitation.

“I was like that as well, but going to Andy’s Man Club has been the best decision I have ever made.

“It is like a brotherhood, and everything stays in that safe space.

“Thanks to Andy’s Man Club, I have been taken out of my darkest place and to my brightest.”

“Football is a staple to a lot of men, so it does make it feel more comforting being at Central Park, in the centre of town and the home of Cowdenbeath (Football Club), as it is the heart and soul of the community,” he commented.

Opening an Andy’s Man Club branch in the Central Fife area was heavily campaigned for by the family of the late Michael Blake.

As previously reported by the Times, the 21-year-old, who was brought up in Crosshill and had only moved to Ballingry just weeks before his death, tragically passed away on October 1 last year.

One of Michael’s sisters, Michelle Coyle, told the Times that her brother was a “friend to everyone”, and a “happy-go-lucky guy who was always smiling”.

Under the surface, though, he was struggling, and Michelle believes more positive messaging and the accessibility of a support group in the Benarty and Cowdenbeath area could have potentially saved his life.

Speaking to the Times following the impending inception of Andy’s Man Club Cowdenbeath, she said: “It is fantastic news.

“It will help a lot of people who need it.

“The idea of A Night for Michael (a fundraising event held in Michael’s memory – which raised £3,000 for Andy’s Man Club) was to raise awareness of the need for an Andy’s Man Club in the area.

“Having this locally will help a lot of men. I think if there had been better advertising of men’s mental health and messages in the area to remind men that it is okay to talk, then Michael would maybe still be here.”