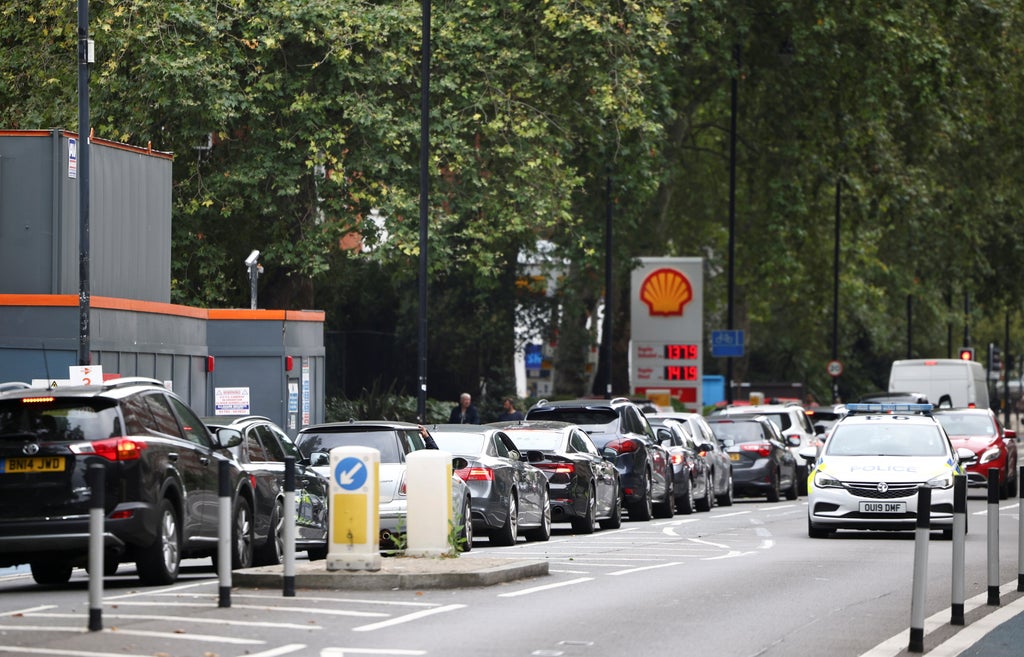 Grant Shapps has sparked an angry row after claiming hauliers have “created” the fuel shortage crisis, despite the government admitting to a lack of lorry drivers.

The transport secretary was accused of a “disgraceful attack” and of “shamefully passing the buck” for the queues at filling station forecourts, as the worsening situation threatened to engulf the government.

Mr Shapps also appeared to blame the public for the problems by panic-buying petrol and diesel “when they don’t need it”, insisting there are adequate stocks.

The controversy blew up afterThe Mail on Sunday newspaper quoted a government source arguing the Road Haulage Association (RHA) is “entirely responsible for this panic and chaos”.

The transport secretary backed the claim, saying: “There was a meeting which took place about 10 days ago, a private meeting, in which one of the haulage associations decided to leak the details to media.

“And that has created, as we have seen, quite a large degree of concern as people naturally react to those things.”

Calling the leak “irresponsible”, Mr Shapps told the BBC’s Andrew Marr programme: “The good news is there is plenty of fuel. The bad news is, if everyone carries on buying it when they don’t need it, then we will continue to have queues.”

But the RHA hit back quickly, pointing out its managing director Rod McKenzie had not even been at the meeting where a BP executive had discussed stock levels.

“He was not, as the government source claimed, “aware of the comments” and certainly did not “weaponise” them in subsequent TV interviews,” a statement said.

“Indeed he repeatedly stressed the need not to panic buy and that there were adequate fuel stocks.

“The RHA believes this disgraceful attack on a member of its staff is an attempt to divert attention away from their recent handling of the driver shortage crisis.”

Sarah Olney, the Liberal Democrat business spokesperson, said: “Grant Shapps is shamefully passing the buck for the government’s own failures.

“The Conservatives have repeatedly ignored calls from businesses to address the shortage of drivers. It is a bit rich for ministers to now blame the public and the road haulage industry for the mess we find ourselves in.”

And Jim McMahon, Labour’s shadow transport secretary, said: “It beggars belief that the transport secretary is seeking to blame others for a crisis entirely of the government’s own making. These problems have been growing for years and the Conservatives have done nothing to address them.”

Mr Shapps comments came after the announcement of emergency visas for foreign lorry drivers to come to the UK to ease the crisis was dismissed as a damp squib.

As expected, the offer will be made to 5,000 HGV drivers – plus 5,500 poultry workers – but the visas will run out Christmas Eve, triggering criticism they are too little, too late.

Keir Starmer suggested 100,000 foreign drivers are needed – the RHA estimate of the shortfall – saying: “We are going to have to do that. We have to issue enough visas to cover the number of drivers that we need.”

The Labour leader said: “I’m astonished the government, knowing the situation, is not acting today. The prime minister needs to say today what he is going to do.”

How Did the Great Recession Affect Structural Unemployment?