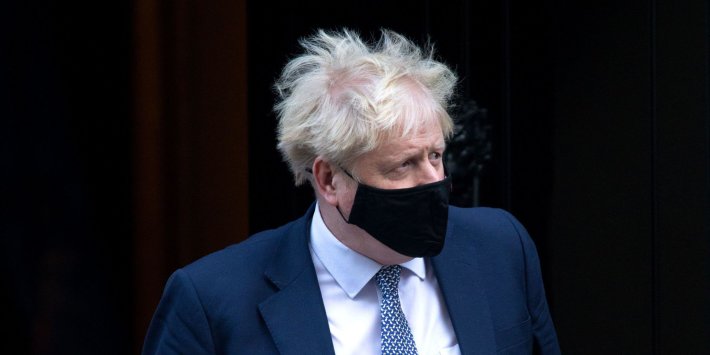 Conservative MPs have strongly criticised Boris Johnson’s “half-arsed” apology for attending a party in the Number 10 garden while the country was in the first coronavirus lockdown.

Some Tories now say it is “just a matter of time” before the Prime Minister is ousted because his explanation that he believed the “bring your own booze” gathering of around 40 people to be a work event “won’t wash”.

In a statement ahead of Prime Minister’s Questions today, Johnson issued an apology over the 20 May 2020 event.

An email exposed by ITV earlier this week showed the party was organised by his Principal Private Secretary Martin Reynolds, who invited around 100 staff in Downing Street to “make the most of this lovely weather” and encouraged them to “bring your own booze”.

Johnson confirmed to the Commons that he had attended the event and claimed he believed staff were working outside.

“With hindsight, I should have sent everyone back inside,” Johnson told MPs. His press secretary later explained that Johnson had not seen the email.

But while Johnson may have hoped today’s statement would draw a line under the issue until the findings of an official inquiry into Downing Street gatherings by senior Whitehall official Sue Gray is published, some Tories remain dissatisfied with the response.

One Tory backbencher described the apology as “half-arsed”, and a senior Conservative MP told PoliticsHome it was “just a matter of time” before Johnson faced a leadership challenge, and dismissed today’s apology.

“He seems to be putting an awful lot of reliance on the Sue Gray report – what does he know?” they said.

“Is Martin Reynolds going to take the hit for him? I think after today it’s perfectly possible letters will go in, and I don’t think anyone who has sent a letter will change their mind, it’s not got him out of jail.”

Another backbencher agreed today’s statement had not got Johnson off the hook. “I just don’t see what this does except buy days of time at most,” they said.

One MP told PoliticsHome that Johnson mingled with colleagues in the Commons Tea Room after PMQs apologising for all the “crap” he had put them through.

He is said to have told them he was being “electrocuted by the anger of the public”.

Senior Tory MP Sir Roger Gale believed that because Johnson had previously denied any wrongdoing, it is now clear he misled Parliament and politically is a “dead man walking”.

“Unfortunately what the Prime Minister has said today leaves people like me in an impossible situation,” he told BBC Radio 4’s The World at One.

“We now know that the Prime Minister spent 25 minutes at what was quite clearly a party. That means that he misled the House.”

Gale said it was now down to the 1922 Committee of backbench Tory MPs to “determine precisely how we proceed”, with the group’s executive due to meet this afternoon.

Another Conservative said if Johnson does not resign now, then “bad results in the local election could focus minds” towards submitting letters of no confidence.

A former minister said he thinks colleagues will hold off until the May elections, but there’s a real concern that more revelations will come to light, and that Johnson’s reputation could be irredeemable.

“With Theresa May, it was about policy. But this is different, this is about personality”, they added.

‘Bring a bottle’ to a ‘work event’ is a novel idea! Very thin ice indeed.

But Conservative MP Christopher Chope said he had “never heard such an abject apology from a government minister” in his career, and said the Prime Minister “showed contrition”.

He told the BBC that in the short term “this is a monumental relief to myself and lots of other colleagues, because we didn’t think he’d be able to carry on” if he did not confirm whether he attended the party or not.

Culture secretary Nadine Dorries tweeted that Johnson had been right to “personally apologise” in the Commons today. “People are hurt and angry at what happened and he has taken full responsibility for that,” she wrote. “The inquiry should now be allowed to its work and establish the full facts of what happened.”

Quoting her tweet, senior Cabinet minister Michael Gove, who will address this afternoon’s meeting of the 1922 committee, said simply: “Nadine is right”.

Labour said Johnson was now “bang to rights”, and Sir Keir Starmer feels the threshold to call for his resignation had been met.

“We have seen yet again the confirmation of it being one rule for the Prime Minister and his mates, and another rule for everyone else,” a Labour spokesperson said this afternoon.

“It is only a matter of time now whether the Prime Minister is rejected by the public, the Conservative Party, or does the decent thing and resigns himself, and those are still the three ways forward.

“You can be guaranteed that we will continue to keep the pressure up on this and we certainly do not regard the Prime Minister’s statement today as the end of the matter.”

Asked if the Prime Minister would be resigning over the scandal, his press secretary said: “He is not.

“But beyond that it is a hypothetical question and I’m not going to be drawn on the potential findings of the [Gray] report.”

What is Alabama’s All-Time Record Against Georgia?

What is Alabama's All-Time Record Against Georgia?