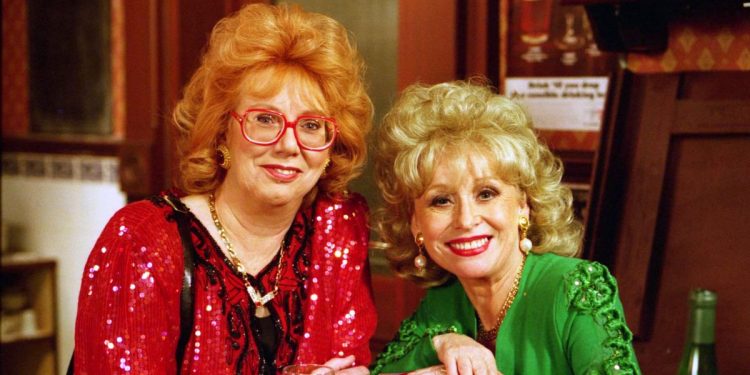 
On The Buses star Anna Karen, who sadly died in a house fire, first acted with Dame Barbara Windsor when they filmed a fight scene for Carry On Camping and they were reunited as EastEnders sisters

Anna Karen and Dame Barbara Windsor had an incredible friendship than spanned decades.

Sadly, it was announced today that Anna has died in a house fire in East London at the age of 85.

Brave firefighters got the blaze on the ground floor of a terraced house under control in under an hour, but tragically the actress was pronounced dead at the scene.

Anna, who is best known for her role in 70s comedy On The Buses, had a long film and TV career which started in a familiar place.

In 1969 she landed a role as a schoolgirl in Carry on Camping, which is where she would first act alongside lifelong friend Barbara.

Ironically, their first scene together at the start of the film saw them having a fight – and Anna was also in the iconic scene where Barbara’s bikini top went flying.

For more of the news you care about, straight to your inbox, sign up for one of our daily newsletters here.

“In Carry On Camping I was terrified because I had to get into a fight with Barbara and she was so famous,” Anna told The Mirror in 1996.

“We ended up screaming with laughter the whole way through. She had no airs and graces and we became solid friends.”

During that time, Barbara had been singing in the same nightclub where Anna was working.

In 1996, Babs told The Mirror: “We met in the Swinging Sixties when I was singing in a nightclub in London’s Bond Street and Anna was on the bill as a stripper.

“She was giving it her all, a real tassles on the nipples act.

“I was working on Carry On Camping and Anna had a small part in it too – she’s behind me in that famous scene where my bikini top springs off.

“People still think of her as Olive from On The Buses, you know – thick, slow and ugly. But she isn’t anything like Olive.

“She’s stunning when she is made up and she is very sharp. She’s actually in MENSA, the group for people with high IQs.”

The two actresses became close friends and Barbara encouraged Anna to audition for a role in her next job on BBC sitcom Wild, Wild Women.

Thanks to some support from Babs, Anna successfully auditioned and played the part of Maude in all six episodes of the series.

The pair would reunited on screen in 1996 for the first time in three decades when they were cast as sisters in EastEnders – with Anna playing Peggy Mitchell’s outspoken sister Aunt Sal.

Commenting on her casting, Anna said, “It’s great to be back on the box and a real treat to be working alongside my old mate [Barbara Windsor].”

Barbara was thrilled when her friend got the part and made sure she met her at the gates for her first day at the studios.

“It was lovely working with her again, but it felt slightly odd because we’re so close in real life,” said Anna at the time.

“We speak on the phone about four times a week and see each other a lot. But the truth about MENSA is that I passed the test and never joined – I just thought, ‘why bother?’

“Ever since Babs heard about that she phones me in the middle of the night to ask me quiz questions. She thinks I know everything.”

They played sisters Peggy and Sal on EastEnders
(

Although she was never a permanent cast member in the BBC soap, Anna’s character would pop up for one or two episodes at a time, usually for big events such as weddings and funerals.

Despite not being in many episodes, Aunt Sal quickly became a favourite amongst EastEnders fans thanks to her no-nonsense nature and witty one-liners.

The actress appeared in 57 episodes of EastEnders in total, with her final scenes airing in January 2017 when she attended Ronnie and Roxy’s funeral.

Anna was devastated when Barbara died in December 2020 at the age of 83 after a battle with Alzheimer’s.

Showing just how close they were, Barbara left £1,000 in her will to Anna, which is the same amount she gave to a number of charities including NSPCC, Breast Care and Help The Aged.

Tragically, it was announced today that Anna had died in the horror blaze as firefighters were called to the scene on Windsor Road, Ilford shortly after 10.30pm last night.

Anna was left money in Barbara’s will

Confirming the tragic news, Anna’s family friend told Mail Online: “We are absolutely horrified at the news about Anna.”

The London Fire Brigade has released a statement confirming that a woman died on Tuesday night.

It reads: “Sadly, a woman has died following a house fire on Windsor Road in Ilford last night.

“Part of the ground floor of a mid-terrace house was damaged by fire. Sadly a woman was pronounced dead at the scene.

“The Brigade was called at 2240 and the fire was under control by 2338. Three fire engines and around 20 firefighters from Ilford and Barking fire stations attended the incident.

“The cause of the fire is under investigation.”

Have you got a story to share? We want to hear all about it. Email us at yourmirror@mirror.co.uk

Anna Karen dead: EastEnders and On the Buses star killed in horror blaze in Ilford

He wants a chance at a full term in the U.S. Senate