Anna Torv’s award-winning role in ‘The Newsreader’: what to know 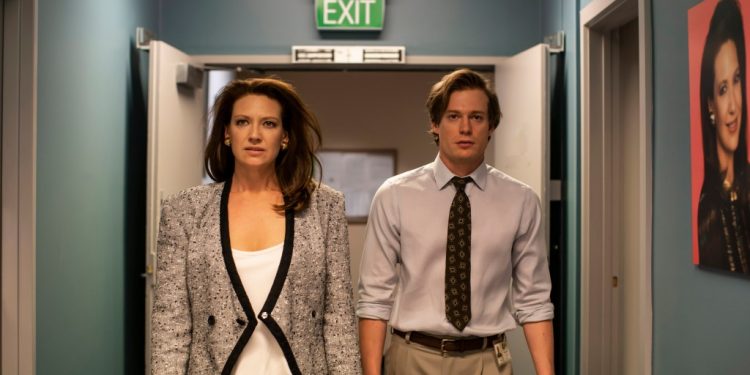 There’s a hint of the 1987 movie “Broadcast News” in “The Newsreader,” a new six-episode drama premiering Friday (March 18) on Roku.

The series, set in 1986 Australia, stars Anna Torv (“Fringe,” “Mindhunter”) as Helen Norville, the tempestuous co-anchor of the “News at Six” in Melbourne alongside her aging, jealous colleague, Geoff Walters (Robert Taylor), who’s turning 60 and clings to his days as a Vietnam War correspondent to assert his relevance. He knows (but won’t admit it) that viewers are tuning in to the newscast for Helen; their on-camera smiles disguise the icy off-camera friction between.

The “News at Six” team also includes young, fresh-faced producer/reporter Dale Jennings (Sam Reid), who’s hoping for his big break as a newsreader and snaring that all-important morning “update” segment — but muffs it, big-time, when he fills in for Helen after she storms out of the station following a loud fight with her boss, news chief Lindsay Cunningham (William McInnes) — after he calls her “a war zone on two legs” and says she has “a face like a slapped a–.” He knows that Helen is the network news division’s bread-and-butter and he tells her as much … in his own un-PC way. Such was life in the go-go newsrooms of the mid-’80s.

“The Newsreader” opens in January 1986 and constructs its narrative around two real-life, major news events: the Space Shuttle Challenger explosion, which killed all seven crew members (including schoolteacher Christa McAuliffe), and the arrival of Halley’s Comet, making its once-every-75-years appearance.

As the series progresses, so does the relationship between Helen and Dale — she believes in his talent and he becomes her producer after she returns to “News at Six.” Dale is in awe of Helen while she struggles for the respect she deserves — and is so often denied — and is able to remarkably pull it together for the camera seconds after emotional meltdowns. They venture into a romance, while he finds himself attracted to cameraman Tim Ahern (Chai Hansen) amidst rumblings, as one of his co-workers says, that he’s “a poof.”

Meanwhile, Helen’s testy relationship with her older co-anchor Geoff (and his wife, who’s not a fan) is tested when he makes an unexpected announcement at his 60th birthday party — and counts on Dale as an ally in the newsroom.

“The Newsreader,” which premiered last summer on Australia’s ABC Network, snared five AACTA Awards (the country’s version of the Emmys and Oscars combined), including Torv as Best Lead Actress in a Drama and McInnes as Best Supporting Actor in a Drama. They’re all well-deserved. Torv plays Helen as a whirlwind of emotions, ambition and empathy who won’t give in to the sexism of her colleagues and bosses, however obvious or subtle, while McInnes adds subtle shading to his role as the demanding, demeaning, cajoling, understanding and intuitive news chief.

Kudos, too, for Reid, Taylor and Hansen — who all turn in strong performances — and to series creator/co-writer Michael Lucas for recapturing the tenor of the times.

While “The Newsreader” is set in Australia, the behavior and mores of the “News at Six” newsroom was universal and commonplace for its time.

Rise of the self-starters: how to master the skills needed for small-business success | The unstoppables

How to Make a Simple Cheese Board

How to Make a Simple Cheese Board