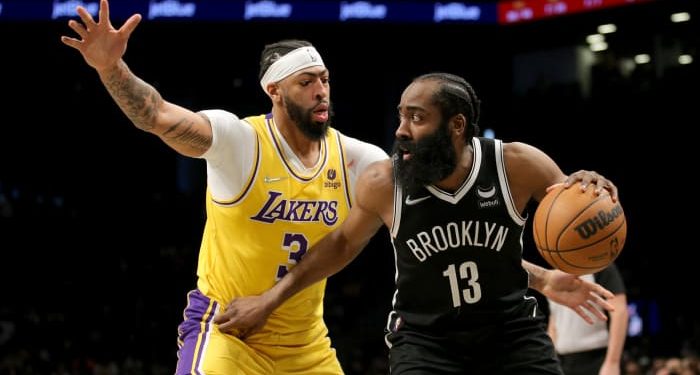 
For one night, the world got a glimpse of what the Lakers can be, a 48-minute taste of what’s possible. Yes, Tuesday’s 106–96 win came against the Zombie Nets, who were without Kevin Durant and Kyrie Irving, who cycled through 11 players in the first half searching for the right lineups (sorry, Blake Griffin) and needed a 33-point night from James Harden just to stay competitive.

Would L.A. have beaten Brooklyn at full strength? Who knows, but this was the best version of the Lakers we’ve seen in a while.

This Lakers team had Anthony Davis, the injury-prone big man who had missed the last 17 games with a sprained MCL in his left knee. Before the game, Frank Vogel warned that Davis needed a readjustment period. When it started, Davis looked just fine. He caught a lob from LeBron James 15 seconds in. He made a midrange jumper on the next possession. He checked out midway through the first quarter with six points, a pair of free throws and three blocks. Foul trouble limited Davis in the second half but all things considered it was the best eight-point in 25-minutes stint the Lakers could have hoped for.

“He really changed things for us defensively at the rim,” said Frank Vogel. “His anchor to our defense is something that has been sorely missed.”

Said James, “His presence alone makes our team so much more complete.”

Davis’s presence had a ripple effect. “It’s definitely different with his presence out there,” said Russell Westbrook. It energized the Lakers defensively. Brooklyn shot 41.6% from the floor. The Nets connected on 25.9% of their threes. Better defense meant more transition opportunities, and L.A. capitalized with 27 fast break points. Said Vogel, “If we can get stops and get [teams] in the open court, we can be really dangerous.”

With Davis back everyone, it seemed, played well. Westbrook scored 15 points. Malik Monk contributed 22 off the bench. Carmelo Anthony chipped in 13 and was a team-high plus-15. Before the game, James urged L.A. to play with the sense of urgency they showed in the fourth quarter against Miami, when they erased most of a 23-point fourth quarter deficit before eventually falling to the Heat. The Lakers did, and it was enough to put Brooklyn away.

James was brilliant but James has been brilliant, even more so with Davis out. He finished with 33 points, his 18th straight game scoring 26 or more. He was good early, when his four points and an assist in the final minute of the first quarter pushed the Lakers to an eight-point lead. He was better late, when back-to-back steals midway through the fourth (“channeling my inner Ed Reed,” said James) put the game away. “Kill mode,” is how Davis described the offensive flow James has been in, during which the 37-year old pro 19 years in has made a strong case for MVP.

“I just basically told myself, ‘nothing else matters besides what you do out on the floor and how you continue to lead these guys,’” James said. “It doesn’t matter the conversations that are going on outside the locker room and the narration of our ball club or whatever else is going on. Nothing else matters besides what I bring to the table every single night. How positive I can continue to lead these guys, no matter the outcome.

“And if I am in a position to play this game the way I do, then go out and make the most of it. So stay low and keep firing is the motto I’ve been on … I don’t have an excuse. And I won’t make one.”

Davis isn’t a panacea for the Lakers’ problems. We know this because just a month earlier, he wasn’t. Los Angeles was 16–14 when Davis exited the lineup in mid-December, a would-be contender with the NBA’s easiest schedule to that point clinging to the No. 6 seed. Davis was off to one of his worst statistical seasons with three-point shooting numbers (17.9%) that were cringeworthy. The minutes James and Davis logged together result in L.A. only a plus-four while the team ranked in the bottom third in offensive efficiency and net rating during that stretch.

Still, a healthy Davis gives the Lakers a chance. He spent four weeks rehabbing his leg and another getting comfortable playing on it. He says a spiriting two-on-two game with teammates DeAndre Jordan, Kent Bazemore and Wayne Ellington in Miami over the weekend gave him the confidence that he was ready and says his body is “fully right.”

That’s good, because the Lakers’ schedule only gets tougher. A trip to Philadelphia looms on Thursday with a back-to-back in Charlotte the next night before the road trip wraps in Atlanta on Sunday. “The more minutes that we log [together],” said James, “we continue to see how dynamic we can be.”

For now the Lakers will take the win, will take a 2–1 start to the road trip and hope to build on it from here. The chatter about Vogel’s job security has quieted and talk of impossible-to-make trades have begun to fade away. The Lakers have their team back, with nearly half a season to do something with it.

“It doesn’t matter what other people think of our team,” said Westbrook. “What matters internally is that we figure out. Hopefully we can string some games together and get a rhythm … we go as far as we push ourselves to go.”