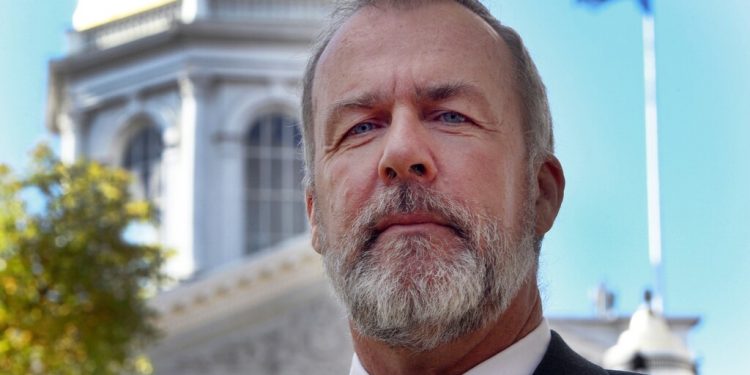 The cause was prostate cancer with complications from the coronavirus, said his daughter Marie Cushing.

Mr. Cushing spent half a century as an activist, campaigning against the Vietnam War, against the use of nuclear power and, as a Democratic member of the New Hampshire House of Representatives, for causes including the legalization of same-sex marriage.

But he was best known for his role in the effort to end the death penalty in the United States, a practice that he described as “state-sanctioned, ritualized murder.”

“I didn’t choose to be a murder survivor; the situation chose me,” Mr. Cushing once told an interviewer. “I can, however, have some effect on how I define the rest of my life. And this is my way of honoring my father’s memory.”

Mr. Cushing’s father, Robert R. Cushing Sr., was a retired math teacher and was at home with his wife on the evening of June 1, 1988, when he responded to a knock at his front door. Outside was an off-duty police officer who lived nearby and who was described in news accounts as holding a grudge against Cushing for more than a decade. The police officer, Robert McLaughlin Sr., wielded a shotgun and fired twice at Cushing, leaving him in the doorway to die.

Laughlin was convicted of murder and sentenced to life in prison without the possibility of parole. He did not face the death penalty. But in the aftermath of his father’s death, Mr. Cushing recalled encountering an acquaintance who remarked that he hoped the killer would “fry” so that the Cushing family would “get some peace.”

“There’s this myth out there that the families of victims need another killing for their healing,” Mr. Cushing told an interviewer. “The truth is, a lot of people are horrified by the very idea of an execution. … We know firsthand what violent death means, and we don’t want to see society do it.”

Mr. Cushing became executive director of the organization Murder Victims’ Families for Reconciliation and in 2004 helped found Murder Victims’ Families for Human Rights. He spoke across the country about his opposition to capital punishment and sponsored perennial bills in the New Hampshire House, where he was serving his eighth nonconsecutive term, to abolish the death penalty in the state.

The effort succeeded in 2019, when the legislature overrode a veto by Gov. Chris Sununu (R) to make New Hampshire the 21st state to abandon capital punishment.

During the legal proceedings involving his father’s case, Mr. Cushing at one point encountered the assailant’s son, an experience that he recalled with emotion.

“We stood next to each other,” Mr. Cushing told the magazine the American Prospect years later, “and there was this sensation of a black hole being laid between the two of us, with both of us trying desperately not to get sucked down into it because this horrible event had taken place and we were both involved, although we didn’t want to be.”

“In a way,” Mr. Cushing reflected, “I was the lucky one because I had my father’s life to celebrate. I am the son of a murder victim. He lives his life as the son of a murderer. And I would not want the pain that I felt in losing my father to go to him. My pain doesn’t get eased by inflicting pain on him.”

In 2011, 23 years after the death of his father, Mr. Cushing lost another member of his family to violence when Stephen McRedmond, the husband of Mr. Cushing’s brother Matthew, was shot by a nephew who then died by suicide, according to a police account at the time.

During his decades at the center of the debate surrounding capital punishment, Mr. Cushing was credited with broadening the discussion to represent the range of opinions among the families of victims, some of whom support the death penalty as strongly as Mr. Cushing opposed it.

Through his advocacy, he became acquainted with David Kaczynski, who helped law enforcement authorities identify his brother, Ted Kaczynski, as the Unabomber in the mid-1990s and who later became a prominent advocate against capital punishment.

(Ted Kaczynski, who pleaded guilty in 1998 to mail bombings that killed three people and injured many more, did not face the death penalty and is serving a lifetime prison sentence.)

“This was someone who came from a place of deep pain and loss,” David Kaczynski said of Mr. Cushing in an interview, “and yet gave just a real number of stirring reasons why the death penalty was not the answer to his loss or to the traumas that victims undergo.”

“Renny had that heart of compassion,” he added, “that helped him see beyond his own pain to the pain of others.”

Mr. Cushing became politically active early on, speaking on the floor of the New Hampshire legislature as a teenager to argue that the voting age should be lowered from 21 to 18. If you were old enough to be drafted for service in Vietnam — where he had seen high school friends killed and family members severely wounded — he argued that you were old enough to cast a vote.

Mr. Cushing briefly attended college but abandoned formal studies to pursue an itinerant life that he said allowed him to see the world through the eyes of others. He picked grapes in California and oranges in Florida, was a trash collector in Atlanta and mined gold in Ontario, his daughter said.

In 1971, Mr. Cushing was arrested and charged with unlawful entry during a May Day demonstration at the Selective Service headquarters in Washington. Along with several other demonstrators, he was convicted and sentenced to a year of probation. When a judge inquired about his profession, Mr. Cushing, then 18, replied that he was a “hoboheniologist,” or “one who lives the life of a hobo to study it,” according to a Washington Post account from the time.

In his home state of New Hampshire, Mr. Cushing worked in welding and carpentry and became a union organizer. He later devoted his organizing energies to the movement against nuclear power, helping to found the Clamshell Alliance to oppose the construction of the Seabrook nuclear power plant in New Hampshire.

Mr. Cushing won his first two-year term in the New Hampshire House in 1986, according to his daughter. He returned for another term in 1996 and then another in 2008. He had served continuously in the State House since his election in 2012, including as Democratic leader before his death.

Mr. Cushing and his wife raised their children in the clapboard house where his father died.

“It seemed real important not to lose this house,” he told an interviewer. “My dad and my grandfather built it. The killer may have taken my dad from us, but he wasn’t going to take my roots, too. … Besides, with time, the house has become something else. The floors that were once stained with my father’s blood are also where my daughters learned how to walk.”

Besides his daughter, of Memphis, survivors include his wife of more than three decades, Kristie Conrad of Hampton; two other daughters, Elizabeth Cushing of Dover, N.H., and Grace Cushing of Portland, Maine; three sisters; and three brothers.

In large part because of the activism of advocates such as Mr. Cushing, the death penalty has become increasingly uncommon in the United States. Eleven executions were carried out in 2021, down from 98 in 1999, the greatest number since the U.S. Supreme Court reinstated the death penalty in 1976, according to the Death Penalty Information Center. The practice is still permitted in 27 states.

Perhaps the most famous anti-death penalty activist is Sister Helen Prejean, the Catholic nun portrayed by Susan Sarandon in the 1995 film “Dead Man Walking,” based on Prejean’s book by the same title.

Reached on her cellphone as she arrived at the gates of the Louisiana State Penitentiary at Angola, where she was due to visit a death row inmate, Prejean reflected on Mr. Cushing’s lifetime of advocacy.

“He was so stalwart, so steady” in his effort to end the death penalty in New Hampshire. In the end, she said, he “finally prevailed.”