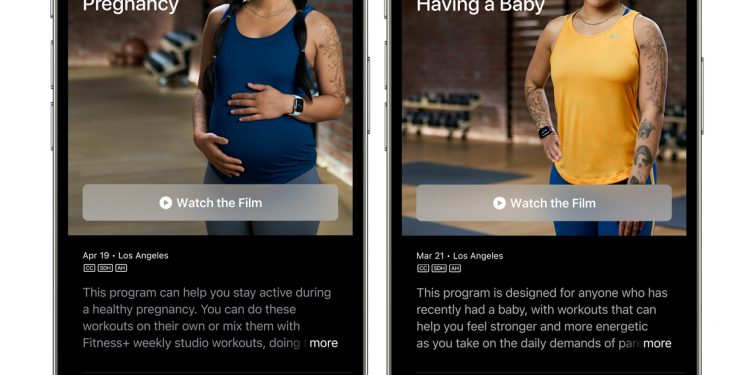 
Apple has rolled out a new series of workouts to help new mothers get back into exercise after giving birth.

The new workout series, called with impressive clarity, “Get Back to Fitness After Having a Baby,” is, Apple says, designed to “help new mothers feel stronger and more energetic as they take on the daily demands of parenthood.”

That demand, as most new moms can tell you, includes lifting the baby, carrying the child around in your arms (usually while balancing something else in the other arm), tugging a stroller through sand at the beach (okay, maybe that was just us), and dead-lifting a car seat (with baby!).

The workouts focus on core, strength, and Apple’s now trademark Mindful Cooldowns. Like other Fitness+ regimens, these are canned workouts that you can follow on your iPhone, iPad, and Apple TV.

Apple describes a progression of 10-minute workouts that starts with the Core for “foundational strength,” and focuses on breathing, gentle moves and Apple notes, “pelvic floor work to help users reconnect to their core.”

The Strength workouts help you build total-body strength, and Mindful Cooldowns offer stretches that zero in on tight spots associated with post-pregnancy.

To keep things real, the program’s led by trainer and new mom, Betina Gozo. Also featured in the program are Fitness+ trainers and moms, Marimba Gold-Watts and Jonelle Lewis.

What is Apple Fitness Plus?

Apple Fitness Plus launched in December 2020, while most of the world was in some form of lockdown and people were turning to home exercise classes as gyms closed their doors. Much like Peloton, it’s a subscription plan where you pay a monthly fee for access to a rapidly expanding catalog of on-demand workouts led by professional instructors.

You don’t get the same real-time interaction with coaches that you do with a Peloton all-access membership, but you will see your heart rate streamed from your Apple Watch onto the screen of your iPad or Apple TV as you exercise, allowing you to adjust your effort on the fly.

All exercise classes have adaptations to suit people who are perhaps recovering from an injury, have a limited range of movement, or use mobility aids.

It’s not just indoor workouts, either. In January 2021 Apple launched Time to Walk – a series of podcast-style episodes narrated by famous actors, athletes, activists and other public figures, who share stories from their lives that you can listen to while you take a stroll outside.

In January 2022, Apple followed this up with Time to Run, wherein professional running coaches take you on a virtual tour of a city somewhere in the world while you run your own route wherever you happen to be. Pictures will appear on your watch along the way, and there’s a themed soundtrack to help you envisage running alongside the trainer.

Campbell Soup Stock is Warming Up for a Breakout

Campbell Soup Stock is Warming Up for a Breakout